The Mint of Austria have issued  a new coin which highlights the addition of a new Polar bear enclosure at Austria’s celebrated Shoenbrunn Zoo – or Tiergarten Schönbrunn. Located on the grounds of the famous Schönbrunn Palace in Vienna Austria, it was founded as an imperial menagerie in 1752 and is regarded as the oldest zoo in the world.

Today Tiergarten Schönbrunn is considered a scientifically administered zoo which sees its main purpose as a center for species conservation and general nature conservation as well as in the fulfillment of the education mandate given to it by national legislation. The still preserved buildings of the baroque era, which have been complemented in the last years by elements of modern zoo architecture, still convey a good impression of the 18th century menagerie-buildings modeled after the after the Versailles style. The first elephant born in captivity in the world occurred at Schoenbrunn Zoo in 1906 and currently, the Tiergarten is one of the few zoos worldwide to house giant pandas. The birth of one panda cub on the 23rd of August 2007 was the first natural insemination panda birth in Europe.

The Polar Bear enclosure – scheduled to open in May of this year, will be part of the area in the zoo known as “Franz Joseph Land”. Under the sponsorship of the Emperor Franz Joseph in 1873, an expedition of Austria-Hungarian explorers went north to the arctic to conduct early research in the polar regions of the world. An area of the Arctic honors this voyage of discovery to this day and is known as Franz Joseph Land and the islands located north of the polar circle are uninhabited today. 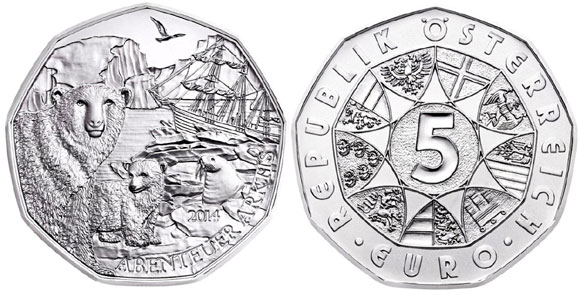 The nine-sided coin’s charming reverse was designed and engraved by the Mint of Austria’s Chief engraver, Thomas Pesendorfer.  The foreground of the design shows a mother polar bear with her cub, along with a curious walrus taking in the scene.  To the right is a sailing ship of the late 19th century working its way through the ice flows of the polar cap.  The icy landscape of the Arctic is seen in the background, along with a soaring Arctic bird in the clear sky.  This side of the coin also includes the words “Abenteuer Arktis”, or Arctic Adventure, as well as the year of issue 2014. The obverse which is designed by engraver Helmut Andexlinger, is the standard 5-euro design, with the denomination encircled by the shields of the nine federal provinces of Austria.  In the center is the face value of 5 euros.

The coins are sold in a specially designed vacuum-sealed blister-pak enclosed in a colorful and informative folder. For more information on this and other coins offered by the Mint of Austria, please visit their website at: http://www.muenzeoesterreich.at/eng/Filter/View/?bereich=Sammeln&sort=ausgabetag&order=desc Information offered in German and English, international orders dispatched.