The National Bank of Poland have issued the fourth design in the exceptional “Treasures of King Stanislaw August” coin series which includes prominent Kings in Poland’s monarchy which lasted from 930 to 1370. The fourth coin of the series depicts a medal which portrays the last king of the Piast dynasty – Casimir the Great who earned his appellation with his great merits related to rebuilding monarchy in Poland.

The Piast dynasty was the first historical ruling dynasty of Poland. The first documented Polish monarch was Prince Mieszko I (c. 930-992). The Piasts’ rule in Poland ended in 1370 with the death of King Casimir III, also referred to as “the Great”. After the death of the last Piast King in 1370, Polish kings were initially elected by a small council, gradually, this privilege was granted to all members of the Polish nobility. 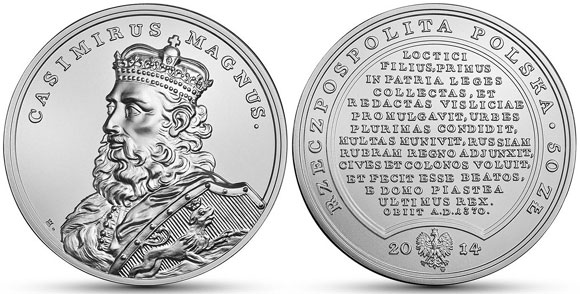 The series, “Treasures of King Stanisław August” replicates the famous 18th century medallic series with the images of the kings of Poland, which was struck on the order of King Stanisław August Poniatowski. The royal medals, designed by two outstanding medalists, Jan Filip Holzhaeusser and Jan Jakub Reichel, were struck at the Warsaw mint in the years 1791-1797 or 1798. The coins issued by Narodowy Bank Polski (National Bank of Poland) are faithful replicas of the medals, preserving the diameter and height of relief of the originals. 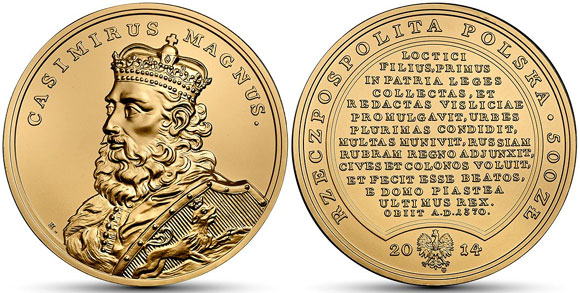 The obverse of the coins, both gold and silver, are re-designed by Anna Wątróbska-Wdowiarska and are faithful replicas of a medal with an image of a bust of king Casimir the Great, based on a portrait painted between 1768 and 1771 by Marcello Bacciarelli for the Marble Room at the Royal Castle in Warsaw. In the upper part of the coin, along the rim – an inscription in Latin: CASIMIRUS MAGNUS.

The reverse of the coins which are designed by Robert Kotowicz are replicas of the historic medal with a short biography of King Casimir the Great in Latin. Along the top rim is the inscription: RZECZPOSPOLITA POLSKA (Republic of Poland), (50 or 500) ZŁ and at the bottom is the year of issue “2014” separated into two digits by a miniature crowned eagle, the national emblem of the Republic of Poland.

For more information on this and the three previous coins issued in the “Treasures of King Stanisław August” series, please visit http://www.mennica.com.pl/en/products-and-services/mint-products/nbp-coins/collector-coins.html and e-mail the sales department directly at:   who will advise about the nearest distributor or advise about retail sales.