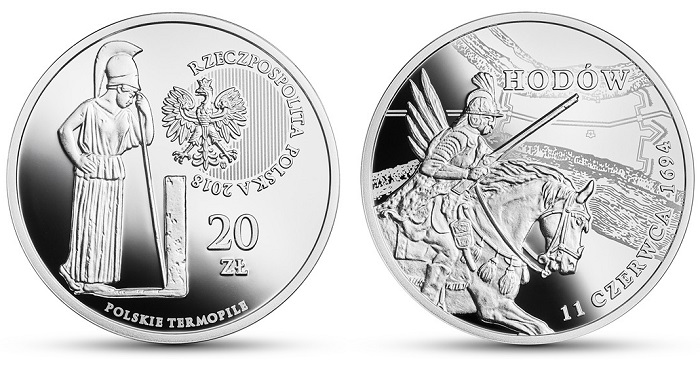 The National Bank of Poland has issued (6th June) new collector silver coins which mark one of Poland’s most epic and decisive battles that was fought between the Kingdom of Poland and Crimean Khanate forces in June 1694 in the Ruthenian Voivodeship, or, the Principality of Galicia–Volhynia. The battle has been compared by historians and military tacticians as the “Polish Thermopylae,” inasmuch as the valiant defenders of Hodów were compared to the 300 Spartans defending Thermopylae. The battle was begun on the 11th June 1694, by Tatar Muslim forces with the intent of invading Polish territory and the aim of pillaging the countryside and capturing prisoners for ransom. From one standpoint, it was the meeting of cultures, where history and a new direction of diplomacy and military tactics would ensue. Hodów, once a quiet, unassuming village near Pomoryany, which is located about 80 kilometres (50 miles) from Lviv, would become the location of a historical battle between a cavalry group of the Polish crown army and the Tatar troops intending to launch a sabotage raid on the Ruthenian Voivodeship.

The regiment commanded by Konstanty Zahorowski and his irregular light cavalry or Polish forces consisted of cavalry banners from the garrison Okopy Świętej Trójcy (Holy Trinity Trenches) at the mouth of the Zbruch River near Kamianets-Podilskyi, among which there were almost 100 hussars and maybe 300 pancerni (medium cavalrymen). The Okopy forces were supported by Mikołaj Tyszkowski’s 200 cavalrymen from another border fort – Szaniec Panny Marii (Virgin Mary Rampart) and with Zahorowski’s subordinates, they would be remembered for distinguishing themselves by displaying excellent defensive skills and fortitude. The Polish regiments were substantially outnumbered by the Tatars who were estimated at 25 to 70 thousand — though contemporary witnesses put the numbers at 40,000, which has been the most commonly quoted figure and was also reiterated by John III Sobieski (reigned 1674–1696), the king of Poland at the time.

The first encounter took place on the fields near Hodów when the Polish cavalry charged the 700-strong Tatar vanguard and compelled them to withdraw. However, shortly afterwards Polish forces would have to themselves retreat to Hodów in the face of overwhelming enemy numbers who had subsequently regrouped. The Polish forces proceeded to fortify themselves using heavy wooden fences left from previous Tatar invasions and for the next six hours Polish troops resisted relentless Tatar attacks. Even after the Polish soldiers ran out of bullets, they continued to fire at the enemy, using previously captured Tatar arrows as improvised ammunition for their guns, which hailed down in a huge wave of arrows during several hour-long exchanges of fire. According to contemporary reports, all Polish soldiers were wounded during the defence, but, despite this significant setback, the soldiers from Okopy did not surrender, compelling the Tatars to withdraw, having been discouraged by the conduct of Zahorowski’s subordinates.

Unable to defeat the Poles, Tatar tacticians sent Polish-speaking Lipka Tatars, ethnic Tatars who originally settled in the Grand Duchy of Lithuania at the beginning of the 14th century to convince the Polish troops to surrender. When Zahorowski refused to acquiesce, the Tatars eventually, though reluctantly, withdrew to the town of Kamieniec Podolski on the Smotrych River (in present-day western Ukraine) and abandoned their invasion completely, having gained practically nothing despite large troop numbers. Ultimately, the Tatars sabotage raid had proved futile and history would recall the valiant defenders of Hodów, which even their enemies would later refer to their opponents on the battlefield as the “undefeated men against thousands” — giving rise to the comparison to the 300 Spartans defending Thermopylae.

After the battle, King John III Sobieski commissioned a monument which commemorated this pivotal victory. This monument has survived into modern times and was rededicated on the 25th October 2014, on the occasion of the 320th anniversary of the battle and original commission. 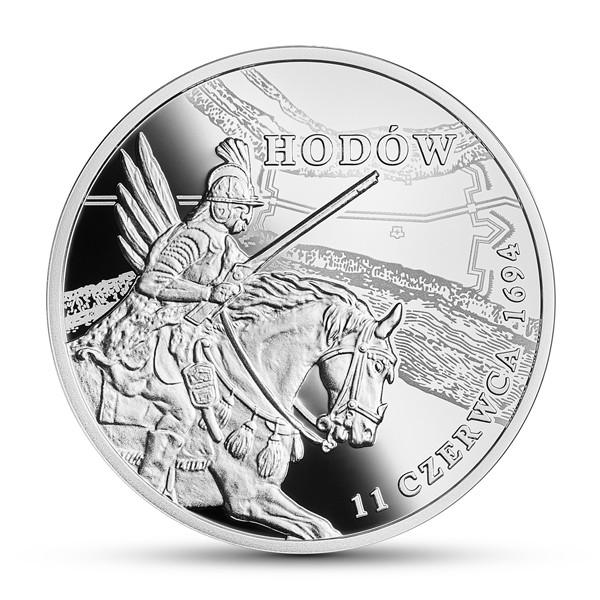 The silver Proof quality coins are produced by the Mint of Poland at their facilities in Warsaw, on behalf of the National Bank, and are designed by Urszula Walerzak (obverse) and Dominika Karpińska-Kopiec (reverse). The reverse design depicts a Polish “Hussar from Okopy” sent in defence of invading Tatar forces. The image of the hussar is seen in full armour, wearing a leopard pelt, with a wheel lock arquebus (or early type of portable gun supported on a tripod) and two-wheel lock pistols. The hussar is seen in front of a background of a rough drawing depicting fortification of Okopy Świętej Trójcy. The text 11 CZERWCA 1694 (11th June 1694) is placed below and towards the lower right along the edge. 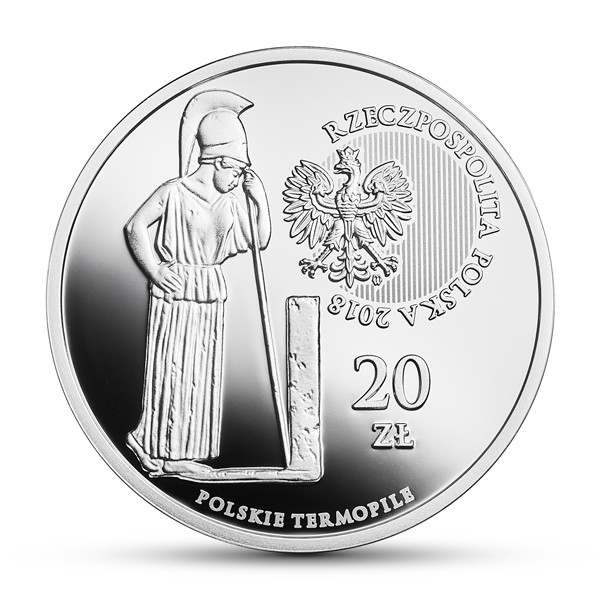 The obverse of the “The Polish Thermopylae” motif depicts Athena, the goddess of war and wisdom. To her right is the state emblem of the Republic of Poland, the crowned eagle, along with the coin’s denomination of 20 ZŁ and the year of issue. Below the primary design is the inscription POLSKIE TERMOPILE. 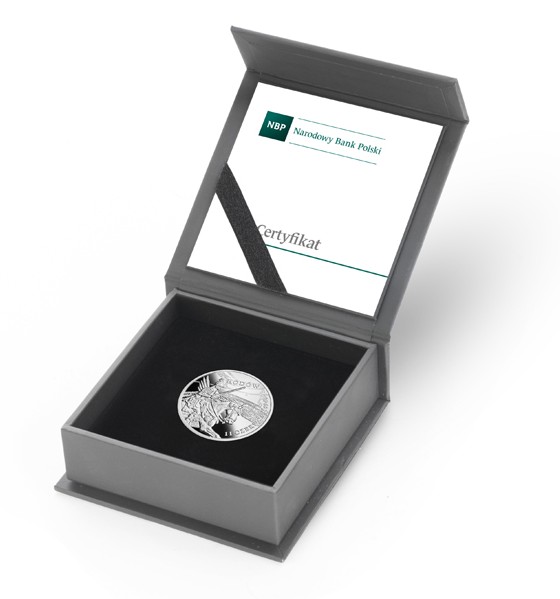 Each coin is encapsulated and presented in a custom branded case along with a numbered certificate of authenticity. For additional information of this coin and other collector, commemorative, and circulation coins issued by the National Bank of Poland, please visit their retail department website.