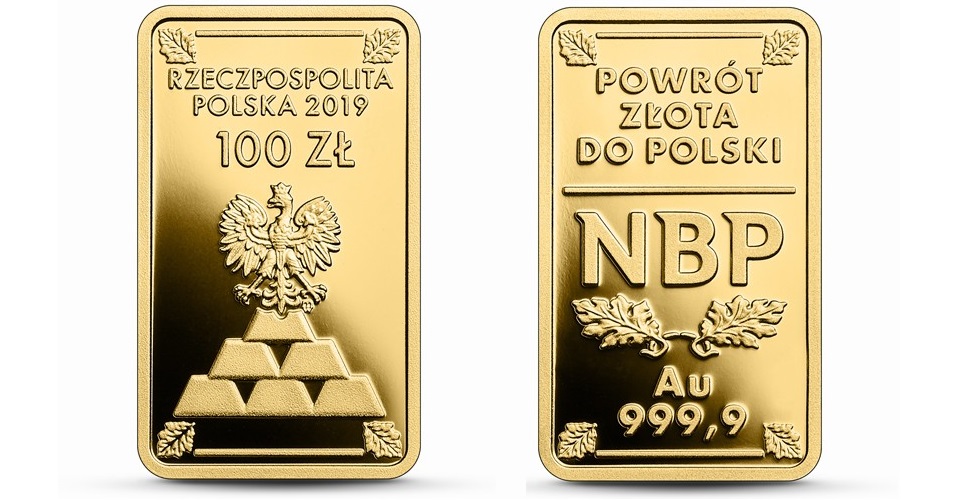 The National Bank of Poland has released (18th December) new gold collector coins which highlight the National Bank’s repatriation of their pre-war gold reserves back onto Polish soil. Stored in the vaults of the Bank of England since the end of the Second World War, the government of the day feared soldiers of the invading Third Reich would steal their reserves. In an attempt to thwart its annexation, it was strategically moved on more than one occasion when finally, it ended up in the vaults of the Bank of England — where it remained until November 2019.

The coins are produced by the Mint of Poland at their facilities in Warsaw on behalf of the National Bank of Poland and designed by Urszula Walerzak. The obverse side of these ingot-shaped coins depicts the initials of the Narodowy Banki Polski (NBP) with two oak leaves below. The text POROT ZLOTA DO POLSKI (“the return of Polish gold”) is placed above the initials with the fineness of the coin Au 999,9 seen just below the two oak leaves. The reverse side includes an image of six gold bars stacked with the Polish crowned eagle crest placed just above and the text RCEZCPOSPOLITA POLSKA 2019 is placed above the primary design. The denomination of 100 Zl is seen just above the crest. 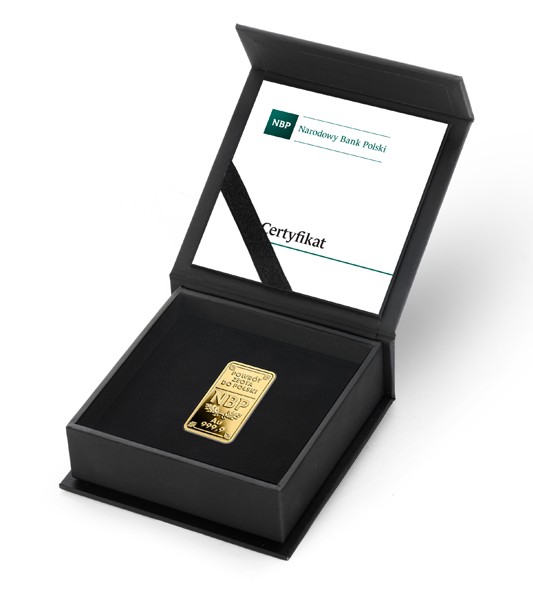 Each coin is encapsulated to accommodate its ingot-shape and is presented in a custom case, accompanied by a certificate of authenticity. For additional information about this coin and others issued by the National Bank of Poland, please visit their website.

The Daring Journey of Poland’s National Treasury, from Exodus in 1939 to Repatriation in 2019

The 1st of September 1939 is remembered in Poland as the catalyst of war in Europe leading to a world conflict, and it was evident at the time to many in government that Germany’s Third Reich would begin a brutal occupation of the country. On the pretense of an imminent Polish invasion across their shared border, Hitler ordered his troops to tear down the border posts and take part in “Blitzkrieg,” an all-out offensive against an army who could not stand up to the might of Germany. In just over five weeks, the Republic of Poland virtually disappeared from the map with Germany and the USSR sharing the spoils of war, dividing the country between them.

During this time, National Bank officials prepared a plan to move as much of the country’s national treasury in gold bullion as possible, which would be a monumental task. At the outbreak of the Second World War, Poland’s national bank held a reserve of around 80 tons of gold worth in 1939 at 90 million dollars. Today that would equate to just over one billion, 600 million dollars.

To prevent the country’s national treasure from being plundered by their invaders — both Germany and the USSR — emergency plans were put into effect to move the gold out of the country. Over the next five years, the gold would be shipped through a dozen countries and across four continents to keep it safe. Surprisingly, its first journey was to Romania, where a small deposit was left in their national bank before it was shipped to Turkey with the help of the British.

From neutral Turkey, it was loaded on to freight wagons and taken to French-mandated Syria, then on to Lebanon — all within one month. Another risky move saw the gold loaded onto ships and sailed across the Mediterranean to France, after assurances from Mussolini’s Italy, then an ally of Germany, that they would not attack the convoy. By October, one month after Germany’s invasion had been carried out, the gold had arrived in Paris and was deposited at the Nevers branch of the Banque de France, 240 kilometres (150 miles) south of Paris where it was hoped it would remain safely until the conclusion of the war. However, the following year, armies of the Third Reich invaded France, with Hitler making his first and only visit Paris to survey all he conquered. With France surrendering to the Nazis and occupation just a few weeks later, Poland’s gold was now effectively in German territory and under their control — something Polish officials had hoped to avoid at all costs.

As Germany’s occupation of part of France was a fait du complet, it would be necessary to move the gold again. Once again, Poland’s gold reserve was on the move, as a convoy of ships took the gold to Africa, this time to Dakar, the coastal capital of present-day Senegal. The consignment would then be moved to Fort Kay, Mali, which was part of French West Africa. Despite the efforts of Charles de Gaulle’s Free French Army to return the gold to Poland from Fort Kay, it would remain there until 1942 until the Allies were able to launch Operation Torch — the invasion of North Africa. As part of the operation, the responsibility of securing the safety of Poland’s gold was placed in the hands of Major Stefan Michalski, a director of Bank Polski SA, which was a private commercial entity within Poland. He was deployed on a special mission to find and recover the gold, or at least learn what happened to it. He later reported the same year that the gold was indeed still in West Africa, it was safe, and it was at this juncture that the free Polish government began negotiating for its release with an agreement signed in 1943.

In 1944, the gold was transported once again to the coastal city of Dakar, where the decision was made to ship it in its entirety to the Federal Reserve in New York and the United States — where it would be safe from any invasion army hostile to Poland. This was indeed a risky operation, but luckily for the government of Poland, it was completed by the end of March. Once in the U.S., the Polish government could make provisions for its safety and use, if needed. The gold was divided into three lots with one division to be kept at the Federal Reserve, one division would be transported to the Bank of Canada in Ottawa, and the third and largest share would be to be taken to the Bank of England in London. Between March and August 1944, the consignment heading for the Bank of England was shipped in small amounts as shipments contained in convoys carrying ammunition and war supplies, while being escorted by destroyers to keep it safe from German U-boats. With the British phase of the operation completed, the final share of the gold to be moved from the Federal Reserve was taken in three separate transports to Ottawa during September and October. As it stood, Poland’s gold reserves, now safely stored at the Bank of England, would eventually be consolidated into their own reserves — but of course still owned by the government of Poland — and only the Free Polish government could request its repatriation. Over time, the other two consignments were also deposited into the vaults of the Bank of England and combined into one single holding once more.

The request to repatriate Poland’s gold reserves was finally made 75 years later when the Polish government formally requested to transport much of their gold reserves back to Warsaw and to their custody. In November, an estimated four billion dollars’ worth of Polish gold was transported in a series of moves by air was carried out. In total, eight nighttime flights were made from an undisclosed London airport over the course of several months this year, which included the transporting of 8,000 gold bars weighing 100 tons to several locations in Poland. The final transport reportedly occurred on the 22nd of November, which saw armoured trucks take a total of 20 crates filled with bars from a facility in northwest London to a nearby airport.

With this repatriation of gold bullion, the National Bank of Poland report they are in possession of 228.6 tonnes of gold, of which 105 tonnes are stored in the bank’s own vaults. From 2018 and into 2019, the bank’s gold reserves were increased by 125.7 tonnes, with the National Bank having purchased an additional 25.7 tonnes. As a result of both the repatriation of Polish gold bullion left from the Second World War and their additional purchase, the National Bank of Poland’s ranking in terms of gold reserves now places them from 34th to 22nd among central banks worldwide. Their ranking in Europe sees them going from 15th to 11th, and, at the same time, their share of foreign exchange gold in official reserve assets increased to 9.1% from 3.8% at the end of 2017.