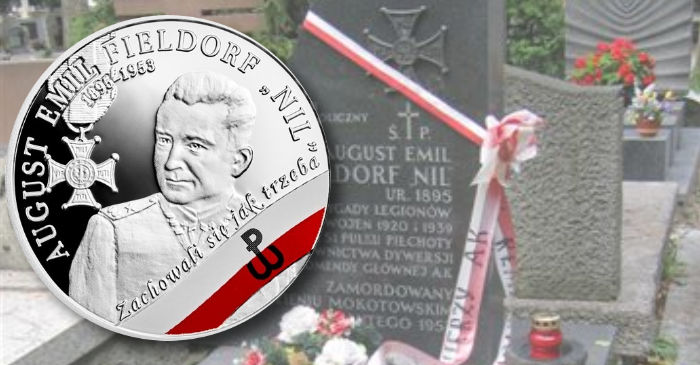 The Narodowy Bank Polski have issued (23rd February) collector coins which are part of the series “The Enduring Soldiers Persecuted by the Communists,” introduced last year, with the first coin dedicated to the memory of Danuta Siedzikówna (1928-1946). The latest and second coin in the series pays tribute to the national hero August Emil Fieldorf (1895–1953). 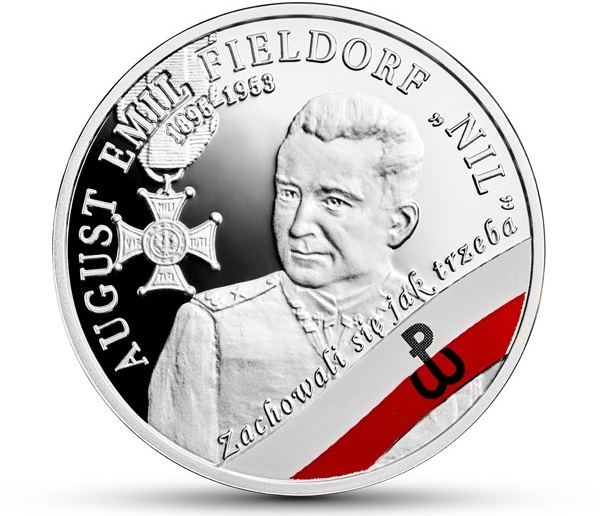 The coin is produced by the Mint of Poland at their facilities in Warsaw and is designed by Dobrochna Surajewska. The obverse side of the coin features an image of August “Nil” Emil Fieldorf. The Order of Virtuti Militari is placed next to Fieldorf’s portrait and a white-and-red flag with the inscription ZACHOWALI SIĘ JAK TRZEBA (“They acted as they should”) is placed in a diagonal direction from the right to the bottom edge. 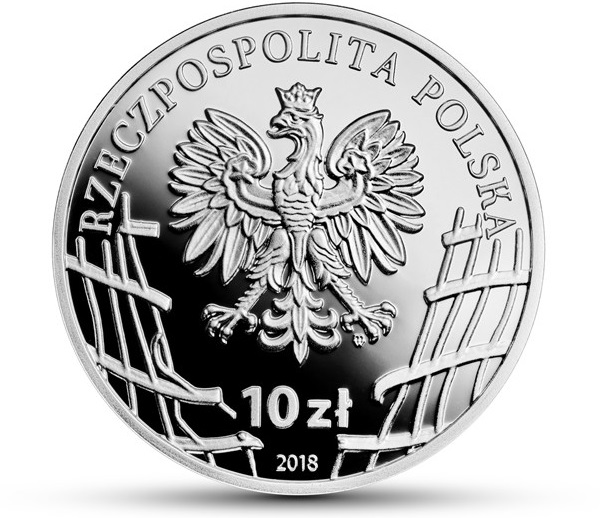 The reverse features the image of the crowned Polish eagle, which was established as the state emblem of the Republic of Poland. At the top is the semi-circular inscription RZECZPOSPOLITA POLSKA, while at the bottom are inscriptions of 10 ZŁ with the year of issue, 2018. In the lower portion of the design is a depiction of prison bars which are torn apart. 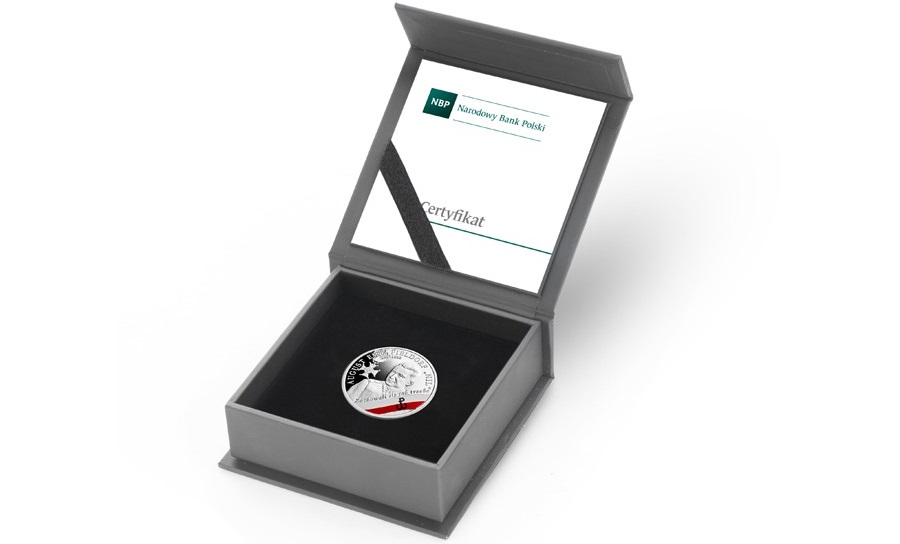 The fourth coin in this ongoing series is encapsulated and enclosed in a custom Mint of Poland branded presentation box along with a certificate of authenticity. For additional information on this coin and others issued by the National Bank of Poland, please visit their website. A second coin in the series is expected to be issued later in the year.


A Man of Integrity in the Face of Unfavourable Odds: General August Emil Fieldorf, 1895-1953 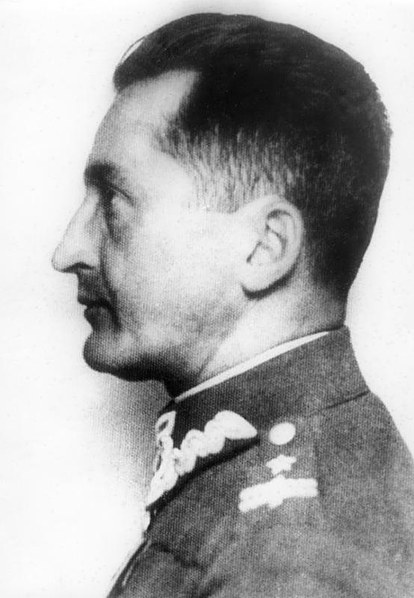 Born on 20 March 1895, in Kraków, August Emil Fieldorf graduated from the men’s college of St. Nicholas and later from a men’s seminary. In 1910, he joined the Sport and Gymnastic Society Strzelec (“Shooter”) where he finished the school for non-commissioned officers. On the 6th August 1914, Fieldorf volunteered to join the Polish Legions and set out for the Russian front, where he served as a deputy commander of an infantry platoon. By 1916, he was promoted to the rank of sergeant.

A year later, Fieldorf was sent to the officer’s training school and after the Polish oath crisis, he was forced to join the Austro-Hungarian Army and transferred to the Italian front. However, Fieldorf deserted and joined the Polish Military Organisation in his home city of Kraków in August 1918. After independence was declared and Poland was formed into a republic, Fieldorf served in the Polish Army from November 1918, first as a platoon commander then as a commander of the heavy machine gun company in the Polish Legion’s First Infantry Regiment.

During the years 1919-1920, as Lithuania had declared their independence in 1918, he participated in the campaign of Vilnius as a company commander in the Polish-Bolshevik War and then in the liberation of Dyneburg and Żytomierz, the expedition to Kiev, and the Battle of Białystok. After these campaigns, Fieldorf remained on active duty and was promoted to the rank of major and he was posted to the Polish Legion’s First Infantry Regiment as a battalion commander. In 1931, he became its second-in-command, and by 1932, he became a lieutenant colonel. Three years later, Fieldorf was transferred to the position of a commander of the “Troki” independent battalion of the Border Guard Corps (KOP) in the KOP’s “Wilno” Regiment. Continuing to move up the ranks, by 1936, Fieldorf was made the district commander of the Polish Riflemen’s Association in France.

With the prospect of another European continental war in the offing due to the increased militarisation of the Third Reich and aggression in the Sudetenland, Poland was becoming very concerned in terms of their geographic place on the map — literally sandwiched between Germany and Russia, former adversaries. In March 1938, Fieldorf became the commander of the 51st Giuseppe Garibaldi Riflemen’s Regiment in Brzeżany, in the eastern fringes of Poland, and was with the regiment for the whole military campaign during the Polish Defensive War of 1939. After the battle of Iłża, he reached his native Kraków but was stopped at the Slovak border during an attempt to get to the West to join the Polish Army under formation. As a result, he was interned but managed to escape from a camp and reached France, where he later completed staff courses and was promoted to full colonel on the 3rd May 1940.

With the capitulation of France after the Polish authorities and the army moved to the United Kingdom where the Free Polish Army was organised, he was appointed the first emissary of the Government-in-Exile and commander-in-chief to Poland. On the 17th July 1940, Fieldorf set out from London to Warsaw.

Fieldorf remained active in the Union of Armed Struggle in Warsaw. By 1942, he was appointed a commander of Kedyw (the directorate of underground sabotage operations) of the High Command of the Home Army. It was on Feildorf’s order that the German S.S. General Franz Kutschera was assassinated in Warsaw. In April 1944, with the tides turning against a perceived Nazi victory, Fieldorf started to form a highly secretive Niepodległość (NIE) organisation, which was designed to continue operations during the expected Soviet occupation of Poland. On the order of the Supreme Commander Kazimierz Sosnkowski, he was promoted to the rank of brigadier general on the 28th September 1944. The next month, he became the deputy commander-in-chief of the Home Army under General Leopold Okulicki, a post he kept until the 19th January 1945, when the Home Army was ordered to be disbanded.

Much of Fieldorf’s fate was sealed when on the 7th March 1945, he was arrested by the Soviet NKVD military authorities in the town of Milanówek under the false name of Walenty Gdanicki. Unrecognized as a general, and processed as “Nil,” he was transferred from the NKVD headquarters in Włochy to a camp in Rembertów. On the 21st March 1945, he was sent to the Soviet labour camps of Bieriozovka, Stupino, and Hudiakowo in the Ural Mountains. After serving his sentence, he was released and returned to Poland in October 1947. 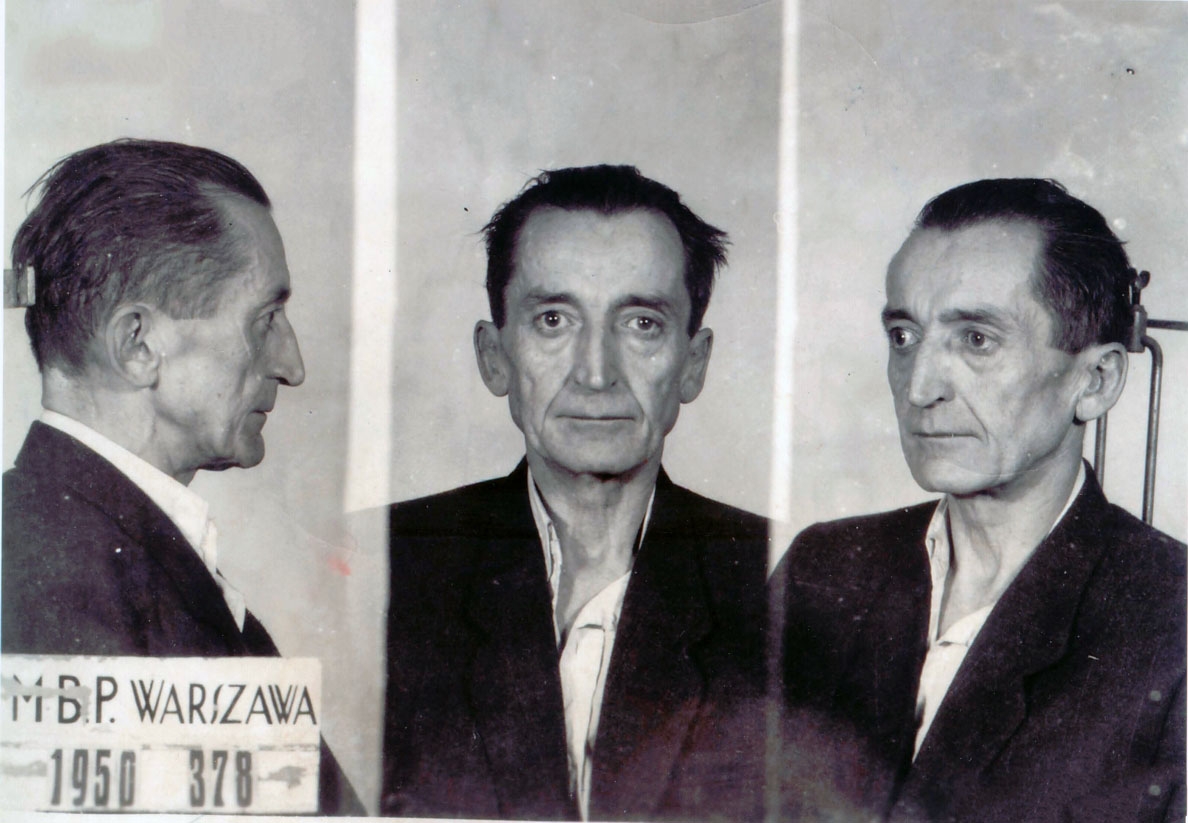 Emil Fieldorf after his arrest in 1950.

Under his assumed name, he settled in Biała Podlaska. Having abandoned his underground activities, with moves between Warsaw and Kraków, he finally settled in Łódź. On the 10th November 1950, he was arrested by the Communist Regional Military Replenishment Unit in Łódź under his actual name and transferred to Warsaw where he was placed under arrest in Rakowiecka Street. On the 16th April 1952, Fieldorf was sentenced to death as a “fascist-Hitlerite criminal” with the sentence being carried out by hanging on the 24th February 1953.

Despite the death sentence having been carried out, there was a continued investigation into the activities of Filedorf during the war and in July 1958, the Prosecutor’s Office decided that they would discontinue the investigation against General August Emil Fieldorf, citing lack of evidence of guilt. The reputation of Fieldorf would not be officially rehabilitated until March 1989 with the ultimate collapse of the communist government. It was found that “Fieldorf had not committed the crime he was accused of,” namely the charge of support of Hitler and fascist activity. General Fieldorf’s body was never returned to his family and remains buried in an unknown location to this day. In 2009, private investigations suggested that Fieldorf was buried in a mass grave in a Warsaw cemetery, together with the remains of 248 other murdered Polish patriots. However, in 1972, a statue was erected on his symbolic grave. In 2006, Polish President Lech Kaczyński posthumously awarded him the Order of the White Eagle, Poland’s highest order awarded to both civilians and the military for their merits.