The National Bank of Poland have issued (4th June) a series of collector coins in both gold and silver to mark the UEFA (Union of European Football Associations) football championship which “kicked” off on the 8th June when the team of the Host country (Poland) competed against Greece in Warsaw. The three-week tournament is being co-hosted by Poland and Ukraine with several venues located around both countries. The new coins, ranging from 500 Zlotych gold coins to 10 Zlotych silver coins include innovative designs and in the case of the silver coins, squared or – pendant shapes. 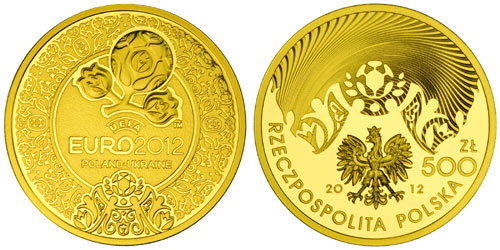 500 Zlotych:  The obverse includes the official UEFA logo along with a border of traditional ornamental filigree patterns. The text “UEFA EURO 2012 POLAND UKRAINE” is centered and in three lines. The reverse includes a field of wavy lines above the Polish national eagle crest and the text “RZECPOSPOLITA POLSKA” and the coin’s face value of 500 Zl. The year of issue, “2012” is placed in two digits on either side of the eagle. Struck in .999 fine gold and to proof quality, the coin weighs 62.2 grams (2 troy oz) and has a diameter of 40 mm. A total mintage of 1,000 pieces has been authorized. 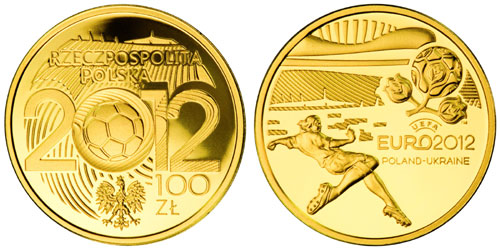 100 Zlotych: The obverse depicts a stylized image of the stadium in Warsaw with a player in action positioned to the lower lift corner. The official logo of the UEFA 2012 tournament is seen to the upper right half. The reverse includes a second stylized version of one of the main stadiums which will host the tournament which is above the main design of the year “2012” with an image of a soccer ball in the middle of the zero numeral. The coin’s face value of 100 Zl. is placed just to the lower right corner and the Polish eagle crest. Struck in .999 fine gold and to proof quality, the coin weighs 8 grams and has a diameter of 21 mm. A total mintage of 4,000 pieces has been authorized. 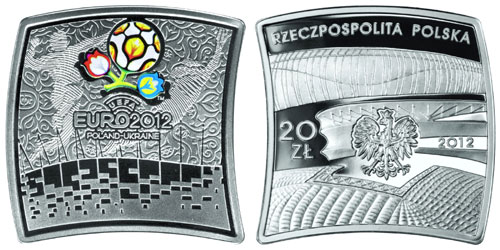 20 Zlotych: In the shape of a flying pendant, the obverse includes a color transformation application which depicts the official UEFA logo. In the background, images of two players in action are on either side of the logo. The reverse depicts the stylized images of the stadiums which will play host to the tournament. The face value of “20 ZL” is positioned to the left half with the year of issue “2012” on the right side of the national emblem which is centered. Struck in .925 sterling silver and to proof quality, the coin weighs 28 grams and has a diameter of 36.2 / 36.2 mm. A total mintage of 35,000 pieces has been authorized.

10 Zlotych:  Struck as a set of four coins, collectively, the design makes up one central depiction from both the obverse and reverse. Each corner, in the shape of a squared or flying pendant depicts action scenes of football being played. Each coin includes the commemorative text for the UEFA championships, the face value of 10 Zlotych and the text “RZECPOSPOLITA POLSKA” on each piece. The overall obverse design includes four players in motion and the reverse shows the top half of the UEFA trophy surrounded with scenes of action on the field. Struck in .925 sterling silver and to proof quality, each 10 Zl. coin weighs 14 grams and has a diameter of 28.8 / 28.8 mm. A total mintage of 15,000 pieces each has been authorized.

The coins are produced by the Mint of Poland who are also the official distributors for the coins. For more information on these and other coins issued from the National Bank of Poland, please visit their website at: http://nbp.pl/homen.aspx?f=/en/banknoty/kolekcjonerskie/2012.html#08