The National Bank of Poland have issued (7th December) two new coins in their ongoing and popular coin series entitled “The Treasures of Stanislaw August” which highlights the succeeding monarchs of the Polish state from the year 992 and the reign of King Bolesław Chrobry to the last Polish King Stanisław August Poniatowski, whose reign came to an end in 1795.

The 13th coin of this popular and continuing series focuses on Sigismund II Augustus (also known as Zygmunt II August), son of Zygmunt I and Bona Sforza d’Aragona, who was the last independent grand duke of Lithuania from 1529, and king of Poland. He was crowned formally in 1530 and ruled from 1548 after the death of his father. He was the last King of the Jagiellonian Dynasty and was recognised as the fief of Livonia, king of Poland, and grand duke of a united Lithuania. His rule was distinguished by a tolerant attitude in matters such as faith, showing a strong interest in the prestige of the state and becoming a keen patron of culture. During his lifetime, Zygmunt August was married three times, marrying first in 1543 with Elizabeth Hapsburg of Austria, who died 1545. He married for the second time in 1547, and against the wishes of his parents, to Barbara Radziwiłłówna, who was crowned as queen in 1550 and died in 1551. King Zygmunt II August married for the third time in 1553 to Catherine Hapsburg of Austria, but this marriage ended in separation in 1563. As a result of the wars with Russia, in 1561 he joined together the Polish Commonwealth and his fief of Livonia along with the secular Duchy of Courland and Semigale, which Prince Gotthard Kettler was the last great master of the Order of the Knight’s Cavalry. He also started the creation of the Polish naval fleet as well as carrying out many other military and economic duties. The latter of which included increased trade reforms, the assets and taxation of which were restored to the treasury.

Zygmunt II August’s most important political act during his rule was the Lublin Union in 1569, which resulted in the Polish-Lithuanian Commonwealth, a common foreign policy, a parliamentary chamber or diet and a uniform currency. Previously, the two entities had maintained separate laws, treasuries, civil servant offices, and armies — though under one ruler. King Zygmunt II August died in the city of Knyszyn at the age of 52 without a designated heir of his own in 1572, despite three marriages, the king remained childless. He was buried in Wawel Cathedral in Krakow, and, according to the system of the free elective monarchy continued by Zygmunt II August, in 1573, Henry III of Valois was elected king of the Polish–Lithuanian Commonwealth. He reigned only for a few months and then returned to France where he was crowned King Henry III of France. Shortly thereafter, the late king’s sister Anna of Poland married Stefan Batory, and they ruled as king and queen of Poland. 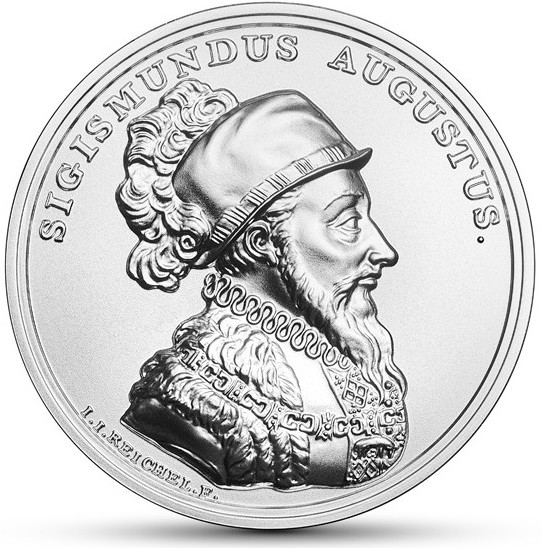 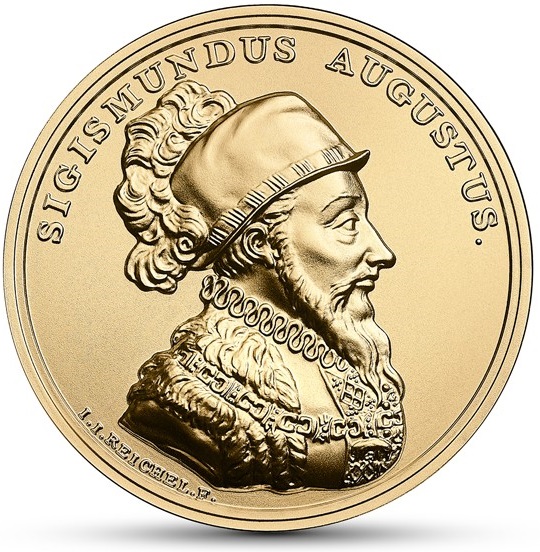 The coins, both the gold and silver versions, are produced by the Mint of Poland in Warsaw on behalf of the National Bank of Poland and are designed by artists Anna Wątróbska-Wdowiarska (reverse) and Robert Kotowicz (obverse). The reverse motif depicts a centrally, stylised image, or bust, of Zygmunt II August in profile and hat with ostrich feathers along with a coat with a fur collar. The profile was originally created and referenced from the painting by Marcello Bacciarelli. On his neck is the chain with the Order of the Golden Fleece. At the top, in a semi-circular inscription, is the text SIGISMUNDUS AUGUSTUS ending with a dot. At the bottom of the portrait, which is based on a previously produced medal, is the signature IIREICHEL.F which ends with a dot. 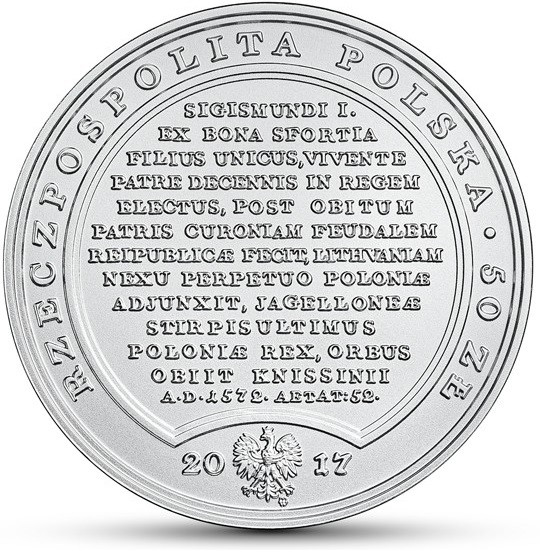 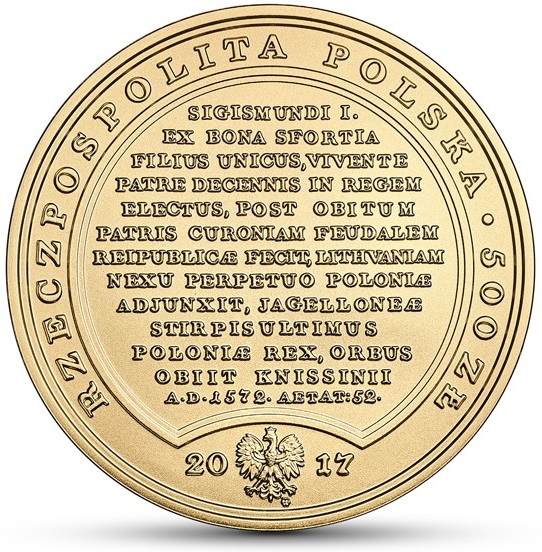 The obverse side at the bottom is an image of the Polish national eagle, which was established as the state emblem of the Republic of Poland. On each side of the eagle are two numerals indicating the year of issue, 2017. Along the rim is an inscription: RZECZPOSPOLITA POLSKA and a rhombic dot separating the text 500 ZŁ. Centrally positioned is the historic inscription SIGISMUNDI I. / EX BONA SFORTIA / FILIUS UNICUS, VIVENTE / PATRE DECENNIS IN REGEM / ELECTUS, POST OBITUM / PATRIS CURONIAM FEUDALEM / REIPUBLICÆ FECIT, LITHVANIAM / NEXU PERPETUO POLONIÆ / ADJUNXIT, JAGELLONEÆ / STIRPIS ULTIMUS / POLONIÆ REX, ORBUS / OBIIT KNISSINII / AD 1572. AETAT: 52. The translation of the inscription, which is abbreviated from Latin, reads:

The only son of Zygmunt I and Bona Sforza, at the age of ten, he was elected king. After the death of his father, he made Kurlandia a fiefdom of the Polish-Lithuanian Commonwealth, Lithuania. He joined with an eternal knot to Poland, the last king of Poland from the Jagiellon family. Childless, he died in the year 1572, in Knyszyn, at the age of 52 on July 18. 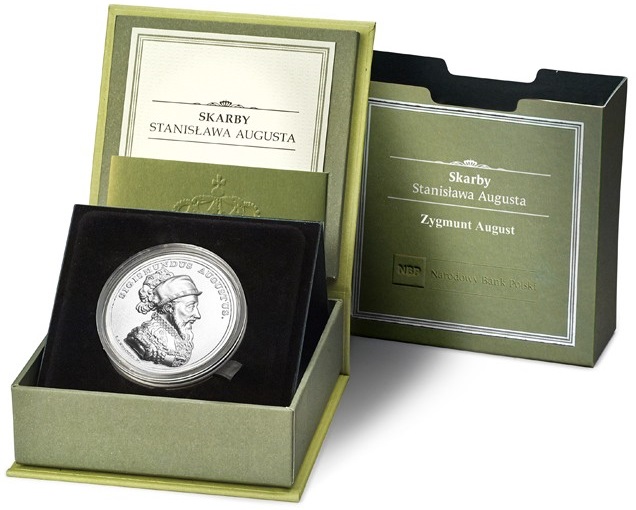 This is the 13th coin in the series of 24 planned issues which commenced in 2013. The 12th coin in the series, issued this year, was made to honour King Zygmunt I Stary (1506-1548) and was released in July. The coins are struck with a medallic effect using a deep or high relief process and are housed in a custom presentation case with certificate of authenticity. For additional information on these and other coins issued by the National Bank, please visit their website.