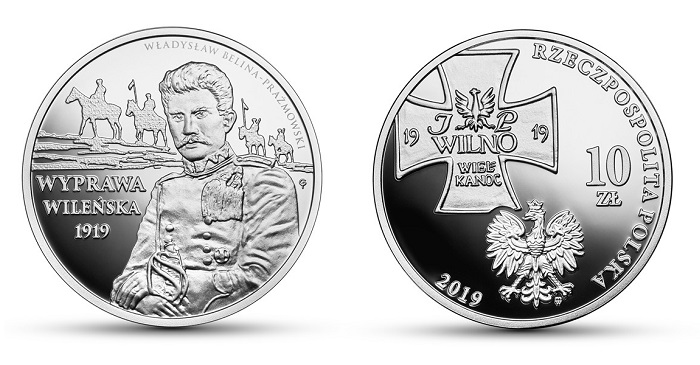 The National Bank of Poland has issued (21st March) new collector coins which remember the centenary anniversary of a particular battle that would help make permanent Polish statehood a reality after the Great War. As the Polish State emerged from the ruins of three defeated and collapsed empires: German, Austro-Hungarian, and Russian, further fighting with Soviet Bolsheviks threatened to derail the newly claimed territory once part of a greater Polish-Lithuanian Grand Duchy.

Known as the Vilnius operation, it was planned and launched by Józef Piłsudski (1867–1935), a Polish statesman who served as the Chief of State and First Marshal of Poland and was considered the de facto leader of the Second Polish Republic as the Minister of Military Affairs. The offensive was planned in April 1919, in contradiction to the opinion held by the Polish and French military staff, who foretold its failure. The commander-in-chief hoped to forestall the expected offensive by the Bolsheviks, who were concentrating their troops beyond the Neman — a major Eastern European river. The Bolsheviks were readying themselves to hit the Polish state, which was only just organising itself from the remnants of European-wide war, in an attempt to transform it into a Soviet republic.

Part of the newly organised Polish fighting forces attacked the towns of Navahrudak, Baranavichy, and Lida — thus catching the attention of the enemy. Under this distraction, a group made up of a cavalry brigade commanded by Lieutenant Colonel Władysław Belina-Prażmowski and several infantry battalions led by General Edward RydzŚmigły advanced on Lithuania’s capital city of Vilnius on the 16th April. The Baltic state was itself seeking independence from the former Russian Empire and the occupation by the Bolsheviks also threatened their bid for national freedom.

Belina-Prażmowski’s cavalry overtook the infantry, and, moving through the woods, caught the strong Bolshevik garrison in Vilnius by surprise at dawn on the 19th April. With support from the locals, part of the city was seized. The enemy recovered from the surprise, and heavy street fighting broke out, but by evening, when the cavalry was running out of ammunition, a battalion of the 1st Infantry Regiment of the Polish Legions arrived in Vilnius on a captured train. Victory was finally assured with the arrival of the main forces of the Polish infantry on the night of the 20th-21st April, and by noon that day, the entire city was captured. For the Bolsheviks, losing Vilnius was a great loss in terms of both propaganda and military purposes. In Poland, the news of the city’s liberation triggered spontaneous outpourings of national celebration. The success was seen as a promise of future victories in the war against Bolshevik Russia and the belief that Poland could successfully defend their new republic, especially against aggression emanating from the east. The campaign of Belina-Prażmowski’s cavalry to Vilnius was considered one of the most perfectly executed actions of the Polish cavalry in the wars of 1919−1920. 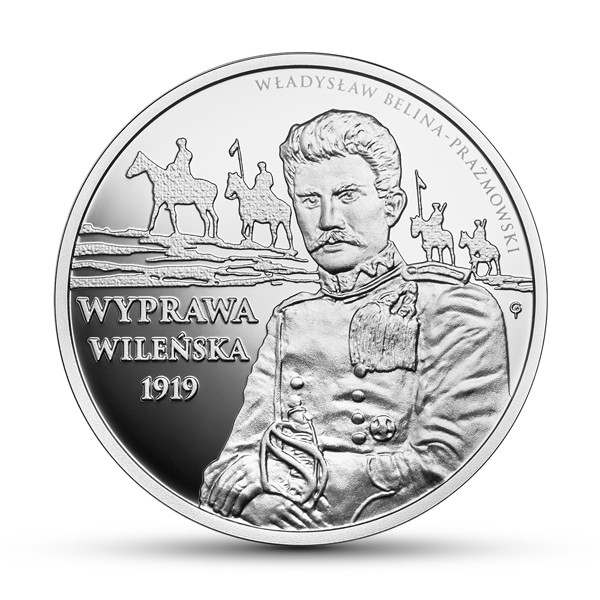 The coins are produced by the Mint of Poland at their facilities in Warsaw, on behalf of the National Bank, and are designed by Grzegorz Pfeifer. The obverse side includes an image of Władysław Belina-Prażmowski, which is based on a photograph taken from the collection of the National Digital Archives. In the background is a depiction of the cavalry marching to Vilnius. To the left of the image of Belina-Prażmowski is the text WYPRAWA WILEŃSKA 1919 (Vilnius Offensive), and along the upper-right edge of the coin is the text WŁADYSŁAW BELINA-PRAŻMOWSKI. 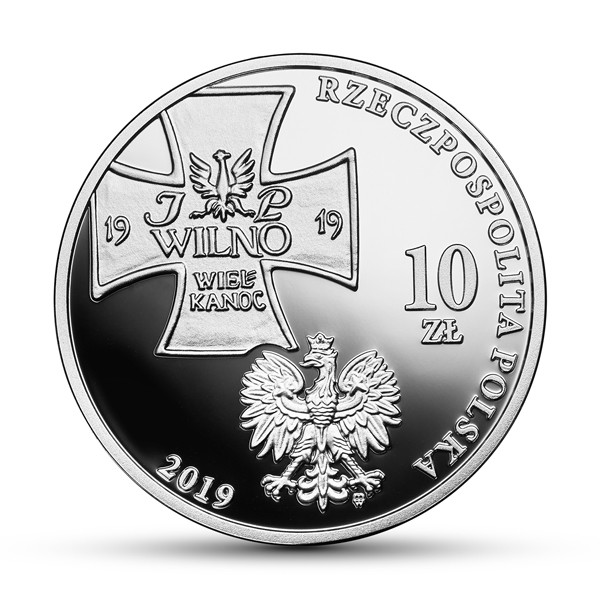 The reverse side includes an image of the military commemorative badge awarded to the participants of the Vilnius expedition in the interwar period. Also depicted is an eagle, the state emblem of Poland, the coin’s denomination of 10 ZŁ, and the text RZECZPOSPOLITA POLSKA. 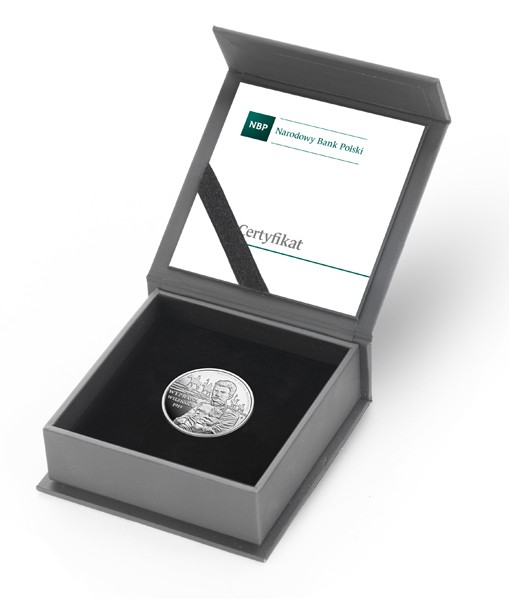 Poland: New silver and colour glass Proof coins released to mark the 700th anniversary of the consecration of St. Mary’s Basilica in Kraków