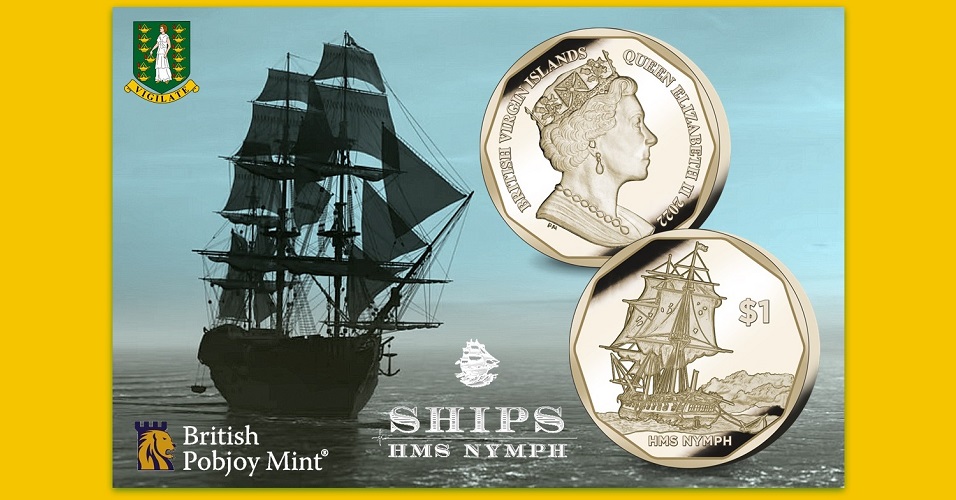 The treasury of the British Virgin Islands has released (10th March) the fifth coin in their current collector’s series entitled “Tall Ships,” featuring many of the ships that during their lifetime were connected to the British Virgin Islands. The latest coin in the collection features Royal Navy ship HMS Nymph, a 14-gun swan-class sloop of the British Royal Navy. Commissioned in May 1778 under Commander William Denne, she served in the English Channel under Commander John Blankett in January 1779. The Nymph then sailed for the East Indies on 8 March that year to join Vice-Admiral Sir Edward Hughes’ East India fleet. In this capacity, her role was to protect English interests and island inhabitants from French and American privateers. Her duties also included protecting interests in Calcutta, Bombay, and Madras, as well as serving as an escort to East India merchant convoys.

The $1 coins are produced by the Pobjoy Mint at their facilities in Surrey, England, on behalf of the treasury of the British Virgin Islands. Struck in virenium, this is Pobjoy Mint’s patented base metal alloy of light golden colour in appearance comprised of 81% copper, 10% zinc, and 9% nickel. The design on the reverse side of the coins features an artist’s depiction of the ship before it sank. The text HMS NYMPH is placed just under the primary design with the denomination $1 seen in the upper-right half. The obverse of the coin features an effigy of HM Queen Elizabeth II created by the Pobjoy Mint and is an exclusive design. The authorised year of issue 2022 is part of the legend surrounding the Queen’s likeness.

Each coin is encapsulated and presented in a Pobjoy Mint-branded micro-fibre protective pouch. A special Collector’s Album to house all coins in this series is available as a separate item. For additional information about this coin and the first coin in the series, please visit the Pobjoy Mint’s website.