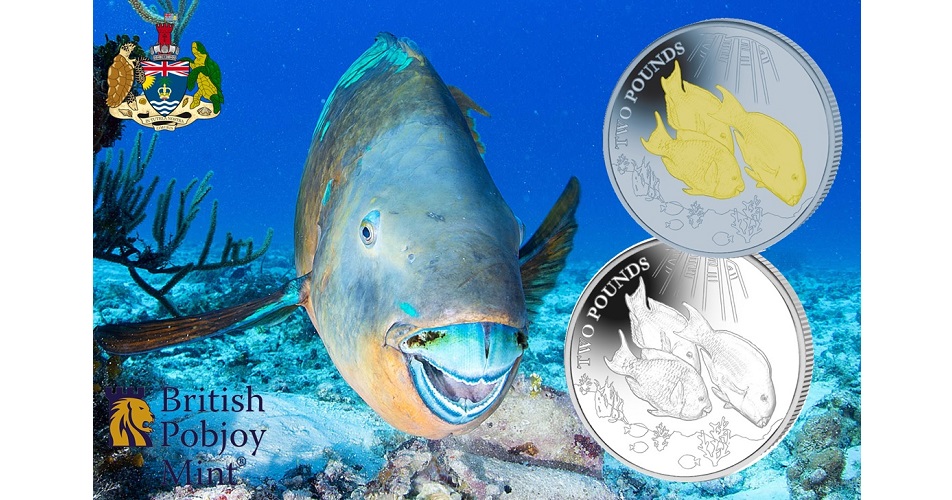 The government of the British Indian Ocean Territory has released (3rd March) their latest collector coins struck in both cupro-nickel and bi-colour titanium. Featured on these coins is an extraordinary species of fish known as “parrotfish” — so-called due to their unusual physical trait. Another unusual characteristic of this particular species is they start their life as females but then undergo a metamorphosis and change into males during their lifespan. Parrotfish are also adept at camouflage, as they can change colour to suit their immediate surroundings.

Their ideal habitat is the clear waters and relatively shallow tropical and subtropical coral reefs of the British Indian Ocean Territory, providing the perfect setting for a wide range of fish, including the parrotfish. Because of the area’s diverse and ideal conditions, this allows the parrotfish to thrive as one of the largest species in the Indo-Pacific.

The coins are produced by the Pobjoy Mint at their facilities in Surrey, England, on behalf of the British Indian Ocean Territory’s treasury. The reverse side of the coins features three parrotfish amongst the corals in tropical waters on both versions.

The titanium versions depict the parrotfish, which are cleverly highlighted in pale green within a blue background. The coins’ denomination of TWO POUNDS is seen to the upper-left of the primary design and along the edge.

The obverse of the coin features an elegant effigy of HM Queen Elizabeth II, which is an exclusive design of the Pobjoy Mint. The issuing authority BRITISH INDIAN OCEAN TERRITORY is placed around the Queen’s likeness, as the coin’s legend with the year of issue 2021 included.

Because of the technical complexity of striking titanium coins and the fact that titanium reacts differently with every strike, each parrotfish coin is technically different from all others. There is also a lined or trait effect present on the coins that is unique to this metal. Each titanium coin is protected by an acrylic capsule and presented in a custom red case, and includes a certificate of authenticity.

The Brilliant Uncirculated cupro-nickel coin is shipped in a micro-fibre protective cloth pouch. For additional information about these coins and others released by the British Indian Ocean Territory, please visit the website of the Pobjoy Mint.