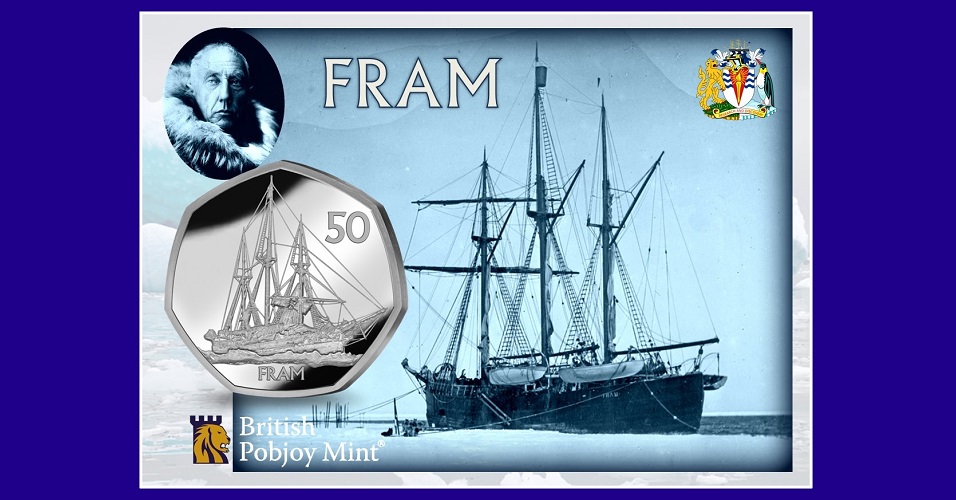 The Treasury of the British Antarctic Territory has launched (28th February) new 50-pence commemorative coins to celebrate the 150th anniversary of the birth of Norwegian explorer Roald Amundsen (1872–1928). The coins’ theme is part of a wider series featuring historical ship designs issued by various treasuries that are part of the British Overseas Territories. This is the eighth coin issued thus far, with an additional two that will complete the series.

The coins are produced by the Pobjoy Mint at their facilities in Surrey, England, on behalf of the treasury of the British Antarctic Territory. The design on the coin features the Fram, a three-masted schooner that was designed to withstand the freezing waters of the Arctic and Antarctic regions. Below the primary design is the text FRAM with the numeral 50 placed just to the upper-right. The obverse of the coin features an effigy of Her Majesty Queen Elizabeth II, which is an exclusive design of the Pobjoy Mint.

The base metal Brilliant Uncirculated diamond finish examples are presented in a blister-card type holder while the sterling silver Proof examples are encapsulated and presented in a custom Perspex display frame accompanied by a certificate of authenticity. For additional information about these and other coins released by the British Antarctic Territory, please visit the website of the Pobjoy Mint.