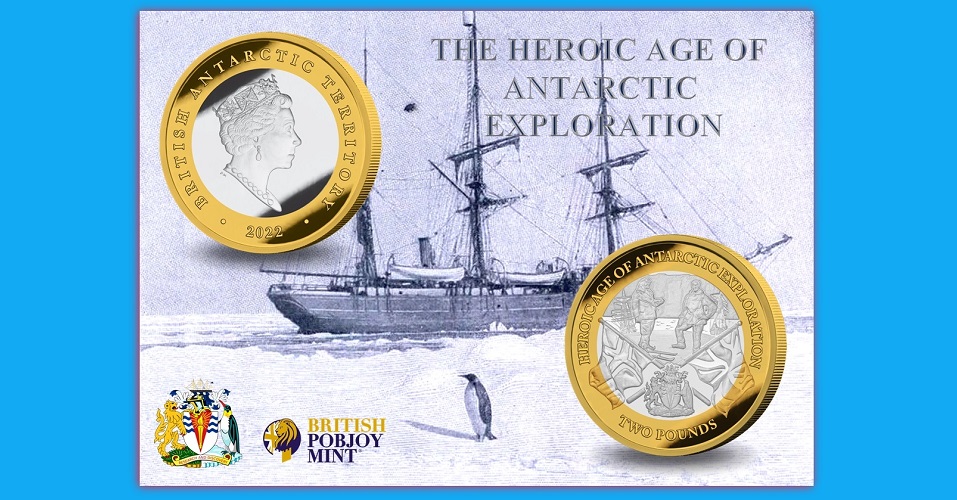 The treasury of the British Antarctic Territory has launched the first coin in a new £2 series which celebrates and remembers the golden age of heroic Antarctic exploration and the one hundred years since the last expedition was launched.

The new £2 coins are produced by the Pobjoy Mint at their facilities in Surrey, England, on behalf of the treasury of the British Antarctic Territory. The design shown on the reverse side features Carsten Borchgrevnik with the Southern Cross on the left and Ernest Shackleton with the Quest on the right. An iceberg is shown in the background along with the Norwegian flag and the Union Flag appearing below the explorers. The coat of arms of the British Antarctic Territory also features below the flags. Above the primary design is the text HEROIC AGE OF ANTARCTIC EXPLORATION with the denomination TWO POUNDS placed below along the edge. The obverse of the coin features an effigy of Her Majesty Queen Elizabeth II, which is an exclusive design of the Pobjoy Mint. The year of issue 2022 is shown below the Queen’s likeness.

Available from the 5th May, the Brilliant Uncirculated diamond finish bi-metallic coins are presented in a blister-pak type folder with illustrations and informative text. The silver Proof coins are encapsulated and presented in a custom case accompanied by a certificate of authenticity. For additional information about these and other coins issued by the treasury of the British Antarctic Territory, please click here. Coins will be dispatched from the 17th May.