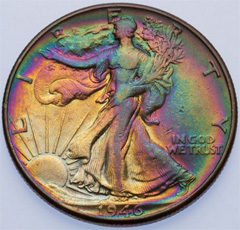 “This is a complex issue, but we needed to have a concise definition to help combat the deliberative and unacceptable alteration of coins in an effort to deceive.  More than 50 PNG member-dealers attended the meeting, and only one voted against the definition,” said PNG President Jeffrey Bernberg.

“We’ve been working on this for over two years with Numismatic Guaranty Corporation and Professional Coin Grading Service as well as a committee of dealers and collectors to formulate an industry-acceptable definition,” said PNG Executive Director Robert Brueggeman. “I told our members at the meeting that the numismatic world is watching us.  We need to take a vote.  We need to make a decision now on adopting a definition.”

Here is the wording of the definition as approved by the PNG Board of Directors and PNG member-dealers attending the meeting in the Chicago suburb of Schaumburg, Illinois on the eve of the Central States Numismatic Society convention.

Coin doctoring refers to the alteration of any portion of a coin, when that process includes any of the following:

1)  Movement, addition to, or otherwise altering of metal, so that a coin appears to be in a better state of preservation, or more valuable than it otherwise would be.  A few examples are plugging, whizzing, polishing, engraving, “lasering” and adding or removing mint marks.

2)  Addition of any substance to a coin so that it appears to be in a better state of preservation or more valuable than it otherwise would be.  The use of solvents and/or commercially available dilute acids, such as Jeweluster, by qualified professionals is not considered coin doctoring.

3)  Intentional exposure of a coin to any chemicals, substances, or processes which impart toning, such that the coin appears to be in a better state of preservation or more valuable than it otherwise would be.  Naturally occurring toning imparted during long-term storage using established/traditional methods, such as coin albums, rolls, flips, or envelopes, does not constitute coin doctoring.

In July 2010, the PNG Board of Directors in partnership with NGC and PCGS adopted a definition of coin doctoring.  However, it subsequently was rejected by PNG members in January 2011.

“The PNG By-Laws provide the general membership with the opportunity to override decisions made by the Board.  In this particular case, the membership voted overwhelmingly in early 2011 to keep the previous PNG Code of Ethics definition in place and not adopt a more-substantive new wording specifically about coin doctoring until the issue could be more clearly defined,” said Brueggeman.

“We then formed a committee headed by John Albanese and composed of PNG members and non-members, dealers and collectors, to research and draft an industry-acceptable definition of coin doctoring. It frankly took longer than some of us expected or wanted to get something substantive finally approved, but the overwhelmingly vote now by PNG members to support a specific coin doctoring definition is an important, major step for the hobby and the profession.  It needed to be done.”

Founded in 1955, the PNG is a nonprofit organization composed of the country’s top rare coin and paper money dealers who must adhere to a strict Code of Ethics in the buying and selling of numismatic merchandise. For additional information, contact the PNG at (951) 587- 8300 or visit online at www.PNGdealers.com