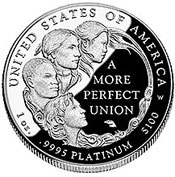 Sales of the 2009 Proof Platinum Eagle opened surprisingly strong with 7,207 coins sold during the four days covered by the sales reporting period. The maximum authorized mintage for the coins has been set at 8,000 coins, suggesting that a sell out is likely to occur in the coming days.

The Margaret Taylor First Spouse Coin debuted at 1,791 proof coins and 1,048 uncirculated coins. These opening sales are slightly higher than for the prior release featuring Sarah Polk, despite being priced $100 higher.