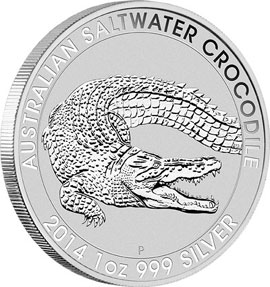 In the latest available figures, Perth Mint gold and silver bullion sales rebounded from the low levels of the prior month. Silver sales seem to have been buoyed by the release of the Australian Saltwater Crocodile 1 oz Silver Bullion Coins.

For the month of May 2014, sales of silver sold as coins and minted bars reached 630,349 troy ounces. This represented a strong gain from the prior month when sales had reached 361,988. It was also up compared to the year ago period when sales measured 587,455 ounces.

During the month, the Perth Mint had released the Australian Saltwater Crocodile 1 oz Silver Coins, adding to the other animal themed bullion coins available. A maximum mintage of 1 million pieces was established for the release, with the coins packaged in protective tubes containing a new tamper evident security seal.

The issue received a warm reception from precious metals investors and collectors, with the Perth Mint indicating the receipt of committed orders for the full mintage in less than three weeks. A portion of the mintage is still pending manufacture and delivery.

Sales of gold as coins and minted bars reached 36,127 ounces for May 2014. This represented a gain from the prior month when sales dipped to a low of 23,461 ounces. The latest monthly sales remain far below the sales level of 86,983 from the year ago period of May 2013.