The Perth Mint has released the second coin within the “Gods of Olympus” series featuring Poseidon, who was worshiped as the God of the Sea.

It was believed that Poseidon was responsible for countless shipwrecks and the drowning of many souls, yet he also held the power to grant a ship a successful voyage and to save those in danger. Sailors prayed to Poseidon for a safe voyage, sometimes drowning horses as a sacrifice. Historically, Poseidon has been portrayed as a mature man with a fully grown beard and equipped with a trident, which he used to shake the earth, shatter rocks, and create storms.

Poseidon was one of six children and the second of three brothers, Zeus, Poseidon and Hades, born to Rhea and Cronus, the ruler of the Titans.  Having overthrown their father, the three brothers divided the universe between them. Zeus took control of the heavens, Poseidon the sea, and Hades the underworld. 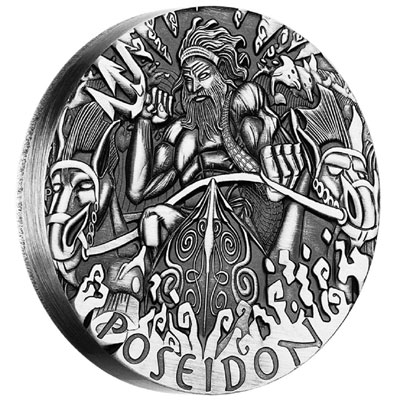 The reverse design of the coin features a depiction of Poseidon riding the waves on his chariot pulled by two sea horses, known as hippocampi. He holds his trident and two dolphins are shown porpoising in the background. The rimless coin is struck in high relief with an antique finish. This format provides a unique appearance and serves to capture the depth and detail of the design. 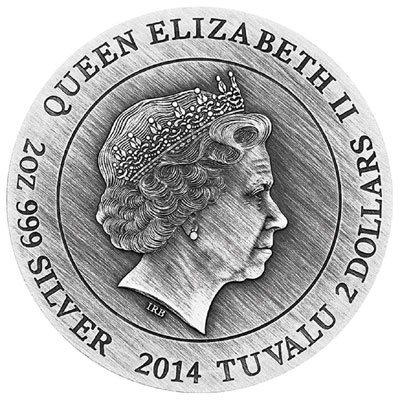 The obverse carries the Ian Rank-Broadley effigy of Queen Elizabeth II. The coins are issued as legal tender under the authority of the Government of Tuvalu with a face value of 2 dollars.

Packaging consists of a round wooden display case and illustrated shipper. Each coin is accompanied by a certificate of authenticity.