The Perth Mint of Australia has recently released the second coin in their series featuring five Great Composers. The one ounce silver coin features  Frédéric Chopin. The coin is issued on the 200th anniversary of the birth of the celebrated piano genius. 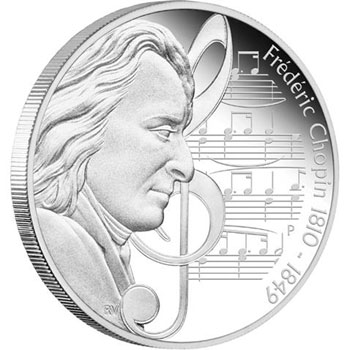 The coin’s reverse depicts a profile of Frédéric Chopin with a treble clef and music notes in the background.  An inscription along the right edge of the coin reads “Frédéric Chopin 1810 – 1849”. The Perth Mint “P” mint mark also appears. The obverse of the coin depicts the Raphael Maklouf effigy of Queen Elizabeth II with the date “2010”.

Each coin contains one ounce of 99.9% silver struck in proof quality. The mintage of the coin is limited to 5,000. Each coin will come in a presentation case with a numbered certificate of authenticity. The offering is priced at AUS $81.36.

The previous release in the five coin series featured Felix Mendelssohn. Upcoming releases will celebrate the births of Robert Schumann, Gustav Mahler, and Franz Liszt. The coins will be released in May 2010, September 2010, and March 2011.