The Perth Mint of Australia has issued a range of gold proof coins to mark the 25th anniversary of the iconic red kangaroo design. The limited mintage coins are available through two individual options as well as a five coin collection containing the entire range.

The red kangaroo design by Dr. Stuart Devlin AO CMG, goldsmith and jeweller to Queen Elizabeth II, was originally introduced as the new theme for the 1989 proof issue of the Australian Nugget gold coin program. The design has appeared annually on the 1 kilo size release of the Australian Kangaroo series for the past 25 years. In 2011, the design was used to grace the 1 tonne Gold Kangaroo coin, recognised by Guinness World Records as the world’s largest coin. Earlier this year, the Perth Mint honored the design by issuing 25th Anniversary Gold Kangaroo bullion tribute coins, which were limited to a mintage of 65,000. 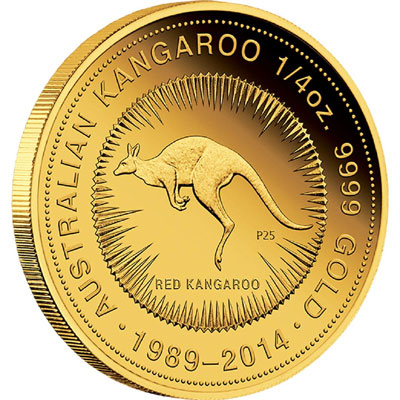 The 2014 25th Anniversary Australian Kangaroo Gold Proof Coins commemorate the iconic design which features a bounding red kangaroo surrounded by stylized rays of sunlight. The design is bordered by the inscription “Australian Kangaroo”, the weight, “9999 Gold”, and the dates “1989-2014”. A special mint mark “P25” appears to recognize the special anniversary.

The obverse design of each coin features the Ian Rank-Broadley effigy of Queen Elizabeth II with inscriptions indicating the monetary denomination and “2014” date.