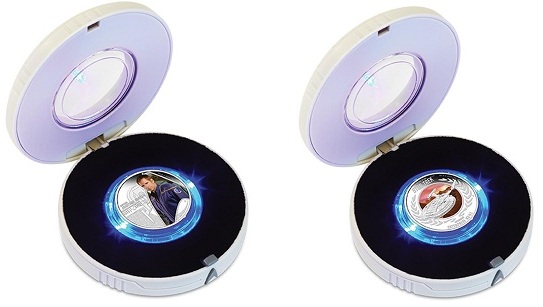 The latest coins in the Perth Mint’s Star Trek series feature Captain Jonathan Archer and his ship, the Enterprise NX-01, from the most recent Star Trek television series, Star Trek: Enterprise. The coins are composed of one ounce of silver that is 99.9% pure and have individual issue limits of 5,000 pieces. Each coin costs $115.00 AUD, with a two-coin set including both issues available for $230.00.

The 2015 Star Trek: Enterprise Captain Jonathan Archer 1 oz. Silver Proof Coin has a reverse bearing a color image of Scott Bakula as Captain Johnathan Archer, with a depiction of the Enterprise NX-01 beside him in silver. Inscribed within the design are CAPTAIN JONATHAN ARCHER, 1 oz 999 SILVER, and the Perth Mint’s “P” mint mark. 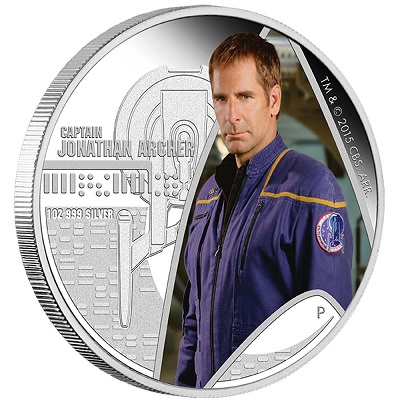 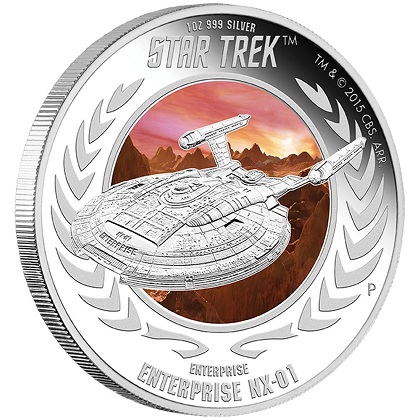 The coins share a common obverse, featuring Ian Rank-Broadley’s portrait of Queen Elizabeth II, the 1 DOLLAR denomination, 2015, and TUVALU, the country of issue. The diameter for each piece measures 40.60 mm, and the thickness is 4 mm. 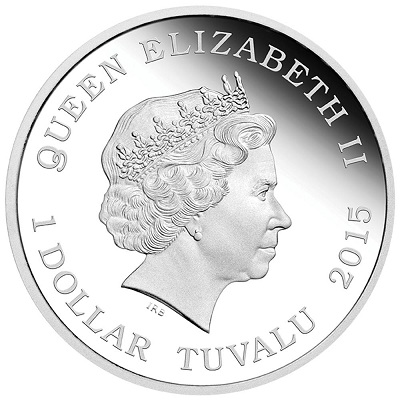 As pictured above, the coins come packaged in a distinctive case that lights up when opened. The two-coin set comes in a larger case that houses both issues and has an issue limit of 1,500 sets. All previous two-coin sets in this series have sold out.

For information on new issues from the Perth Mint, please visit the “Recent Releases” page on its Web site.