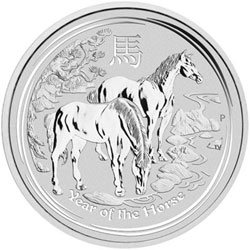 As opposed to the United States Mint, the Perth Mint of Australia does not tend to experience as significant a jump in sales for the first month of the year. This is due to the fact that the majority of 2014-dated bullion coins are first made available for sale in September of the preceding year. Across the available monthly sales data, this is when the seasonal spikes in demand have tended to take place.

Silver bullion sales may have been positively impacted by the initial release of the 2014 Australian Lunar Year of the Horse 5oz Silver Bullion Coins during the month. The other sizes for the issue had been released in September 2013, however the release of the 5oz size had been reportedly delayed due to a surge in demand for large bullion coins.