The Perth Mint of Australia has started accepting orders for a half gram sized gold coin featuring the Kookaburra. This completes a trio of diminutive gold coins featuring iconic Australian animals. 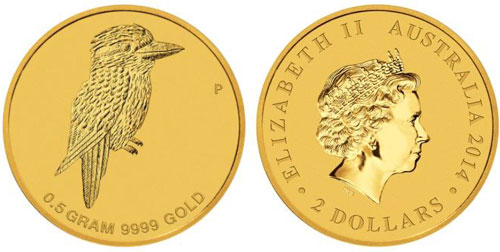 The new 2014 Mini Kookaburra features the image of the iconic Australian bird in a resting pose. The inscription below indicates “0.5 gram 999 gold” with the Perth Mint’s “P” mint mark in the right field.

The obverse design features the Ian Rank-Broadley effigy of Queen Elizabeth II with inscriptions indicating the “2014 date and the “2 Dollars” legal tender denomination.

The button sized coins have a diameter of 11.60 mm and maximum thickness of 0.70 mm. The coins come housed in a protective acrylic capsule mounted on a wallet sized card. There is an unlimited mintage for the issue.