The Perth Mint of Australia has introduced the 2013 Mini Koala, a button-sized 99.99% pure gold coin that weighs just half a gram. The product is positioned as an affordable opportunity for collectors to add a pure gold coin to their collections.

This represents the Perth Mint’s second foray into gold coins with a weight of just 0.5 grams. In 2010, they had introduced the Mini Roo, which sold 15,713 units in its inaugural release. The offering has been repeated in each subsequent year with a new design featuring the iconic Australian marsupial. Sales reached 14,852 and 18,002 for 2011 and 2012, respectively. The 2013-dated release went on sale earlier this year. 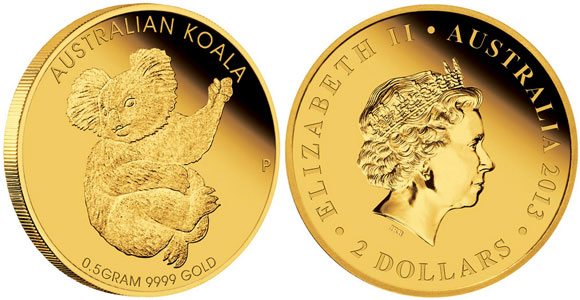 Each coin has a diameter of 11.60 mm and thickness of 0.70 grams. The gold content measures 0.016 troy ounces, which equates to an intrinsic value of just under $20 based on the current market price of gold.

Each coin comes housed in a protective acrylic capsule and is presented on an illustrated wallet sized card. For additional information or to place an order, please visit the Perth Mint product page.