The Perth Mint of Australia has introduced the “Mini Roo” which contains just 0.5 grams of 99.99% pure gold (0.016 troy ounces). The diminutive coin has been introduced as a way allowing more people to have the opportunity for gold ownership by providing a very low price point. 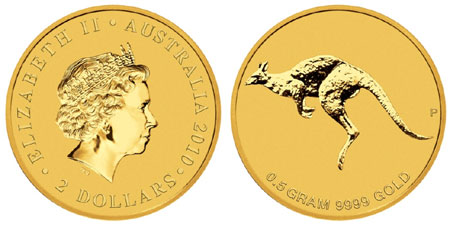 The reverse of each coin contains the image of a kangaroo that will change every year of release. This year’s design portrays a kangaroo in a bounding pose. An inscription below indicates “0.5 GRAM 9999 GOLD” and the Perth Mint’s “P” mint mark appears to the left.

The obverse of the coin features the Ian Rank-Broadley effigy of Queen Elizabeth II with inscriptions “ELIZABETH II”, “AUSTRALIA 2010”, and the legal tender face value “2 DOLLARS”.

The new Mini Roo gold coins have a diameter of 11.60 mm and thickness of 0.70 mm. Coins purchased from the Perth Mint come in a protective acrylic capsule. The coins were first released on May 4, 2010 and will have an unlimited mintage.