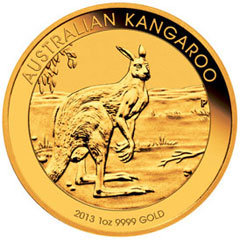 The Perth Mint of Australia has released the latest monthly sales figures indicating the total ounces of gold and silver sold as coins and minted bars. While silver sales weakened during March, gold showed an increase from the prior month and the year ago period.

For the entire first quarter of 2013, gold sales were 160,088.49 ounces. The Perth Mint has indicated that during the first quarter buyers purchased 48% more ounces of Australian Kangaroo and Australian Lunar Gold Coins compared to the same period in the prior year.

In reaction to the recent declines in precious metals prices, the Perth Mint indicated an increased activity level on their bullion website, which recorded its highest daily turnover of the year and one of the best days of the past twelve months.