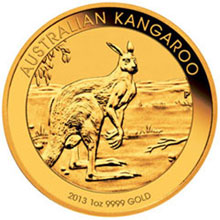 The situation is similar to what was seen at the United States Mint during the month. Sales of their flagship American Gold Eagle bullion coins fell to a six year low, while silver bullion sales remained robust. The drop in gold sales was attributed to seasonality and the impact of several large liquidations on the secondary market.

Perth Mint sales of silver as coins and minted products reached 691,258.63 troy ounces during the month. This was down slightly from the prior month, but more than double the monthly sales from the year ago period. In August 2012, silver sales were 338,945.22 ounces.

For the year to date, silver sales have reached more than 5 million ounces.

In September, sales will likely see a boost from the release of the 2014-dated coins for the Australian Lunar series gold and silver coins and the Australian Kookaburra silver coins. Purchasers are typically eager to obtain the newly designed bullion coins, particularly those which are subject to limited mintages.