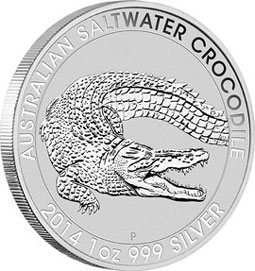 The Perth Mint of Australia has released their monthly figures indicating the amount of gold and silver sold as coins and minted products. The latest monthly sales totals were mixed compared to the prior month, with silver seeing a slight loss and gold seeing a slight gain.

In June, sales of silver as coins and minted bars reached 586,358 troy ounces. This compared to sales of 630,349 ounces in the prior month and 588,630 ounces in the year ago period. A significant contributor to sales likely continues to be the Australian Saltwater Crocodile 1 oz Silver Bullion Coins. Following the launch of the coins in mid-May, the Perth Mint had announced the commitment of orders for the full mintage of one million coins in less than three weeks.