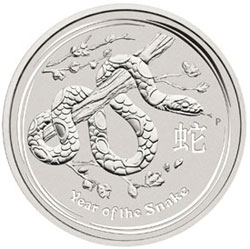 The Perth Mint of Australia has released the latest monthly figures for the total ounces of gold and silver sold as coins and minted bars. While the sales totals declined from the record highs experienced in April, they measured strong gains compared the year ago period.

The Perth Mint gold bullion series include the Australian Kangaroo and Lunar coins along with offerings of minted bars, which are all available across a variety of different sizes.

Sales of silver as coins and minted bars reached 587,454.82 troy ounces for May 2013. This was down sharply from the prior month when sales have surged to more than one million ounces. The latest monthly total does represent an increase of 34.20% compared to the year ago period of May 2012 when sales were 437,759.34 ounces.

The Perth Mint silver bullion series include the Australian Koala, Kookaburra, and Lunar coins as well as minted bars, all available across a variety of different sizes.

In April, the Perth Mint had suspended production of all but three silver bullion coins in an effort to satisfy demand for the most popular products as effectively as popular. Production for the suspended products was recently resumed on June 11, 2013.