The Perth Mint and Australia Post recently introduced a new series of stamp and coin covers featuring Australian baby animals. The first issue for the “Australian Bush Babies” series featuring the Koala was released on July 1, 2011.

The aluminum bronze coin features a baby koala with its eyes bright and alert. The animal is set against a background of golden wattle, waratah, and flowering gums, with a cicada in the right field. The obverse of the coin features the Ian Rank-Broadley effigy of Queen Elizabeth II, with inscriptions indicating the legal tender face value and the year 2011.

The design by Elise Martinson was previously featured on the series of Bush Baby Silver Proof Coins. These one-half ounce .999 fine silver coins featured baby animals with Australian flora in the background. The animals portrayed were the koala, dingo, bilby, sugar glider, and kangaroo. The same line up of animals will appear on the new stamp and coin cover series. 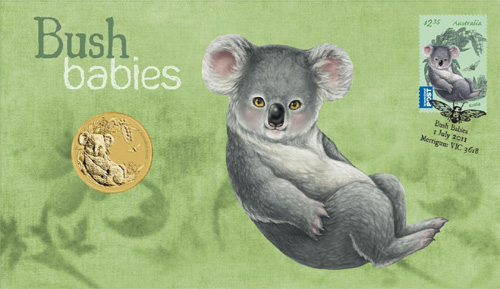 For each release, the uncirculated aluminum bronze coin is displayed within a circular window of an illustrated envelope. A postage stamp is affixed with a post mark for the first day of issue with Australia Post’s Seal of Authenticity and official number.