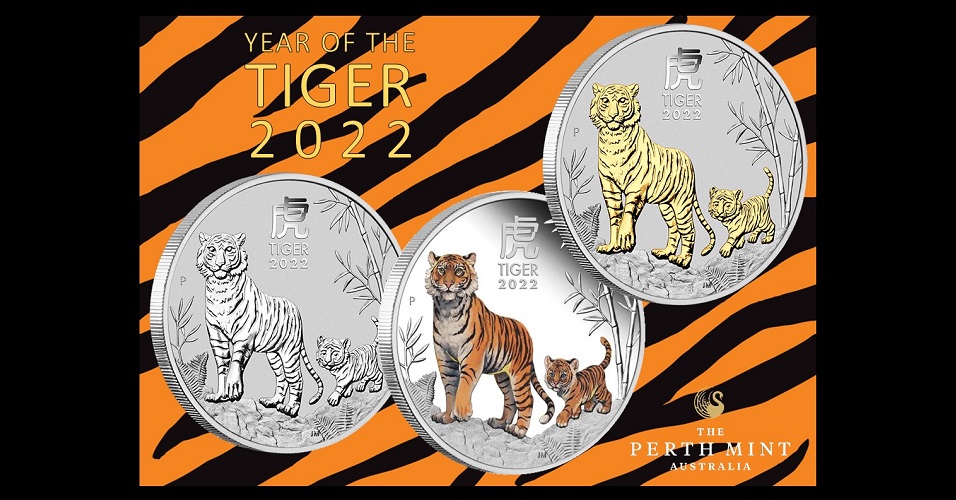 Perth Mint has released their latest collection of lunar year bullion and collector coin range with a selection of finishes that include gold-plating and colour. First issued in 1996 and now featuring a third series of designs, the long-running Australian Lunar Coin Series celebrates the 12 animals of the lunar zodiac with a sequence of annual designs portraying the mouse, ox, tiger, rabbit, dragon, snake, horse, goat, monkey, rooster, dog, and pig. The 2022-dated coins celebrate the Year of the Tiger, whose rule over every third year in the 12-year lunar calendar is said to bestow courage, confidence, and charm for people born under its influence during years such as 1950, 1962, 1974, 1986, 1998, 2010, and 2022. The particular design series, which is in its third year, focuses on the lunar animal along with their young, in the case of the 2022-dated coins, a mother tiger is trailed by one of her cubs. The three Proof examples include the traditional strike, a 24-carat plating of the tiger and cub, and a version including vivid colour highlighting the tiger and cub.

Designed by graphic artist Jennifer McKenna, her depiction features a tiger cub following its proud and protective parent across a rocky terrain. Also included are representations of bamboo and ferns along with the Chinese character for “tiger” and the inscription TIGER 2022. To the left near the edge is the Perth Mint’s P mintmark. 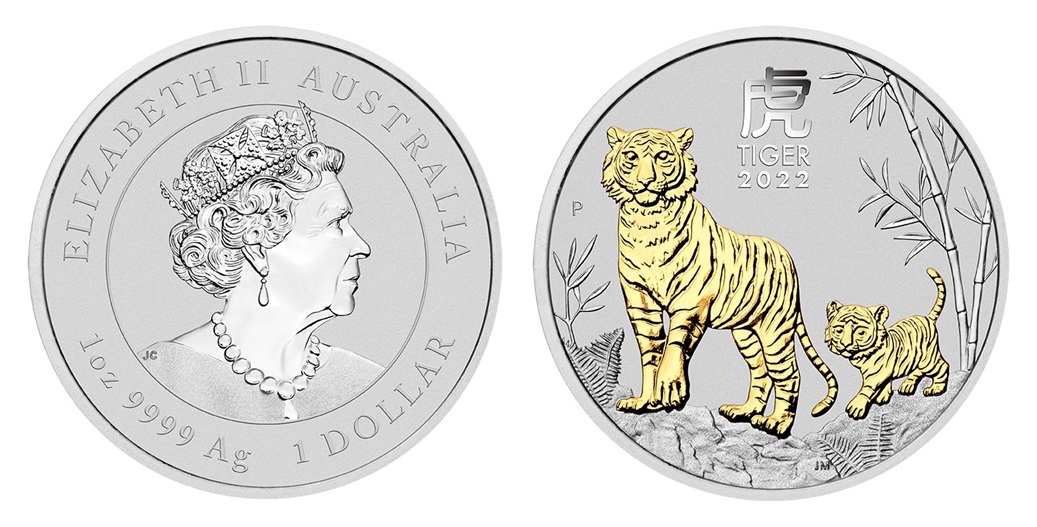 The obverse side includes the Commonwealth effigy of HM Queen Elizabeth II created by Jody Clark and seen on Australian coinage since 2019. The denomination of 1 DOLLAR is placed below the Queen’s likeness. 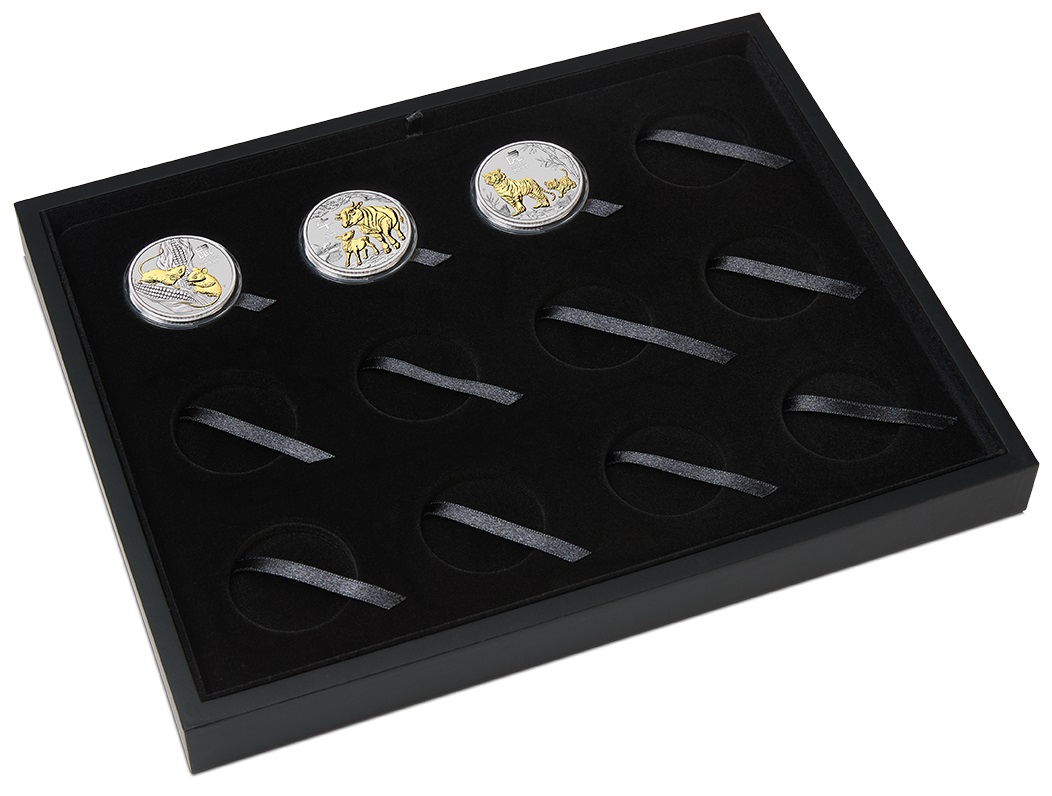 Accompanied by a numbered certificate of authenticity, each option is presented in a classic display case with a clear lid and an illustrated protective box. When aligned with the boxes from the other 11 coins in the series, the resulting diorama cleverly depicts all 12 animals participating in The Great Race, a traditional story about the creation of the lunar calendar. 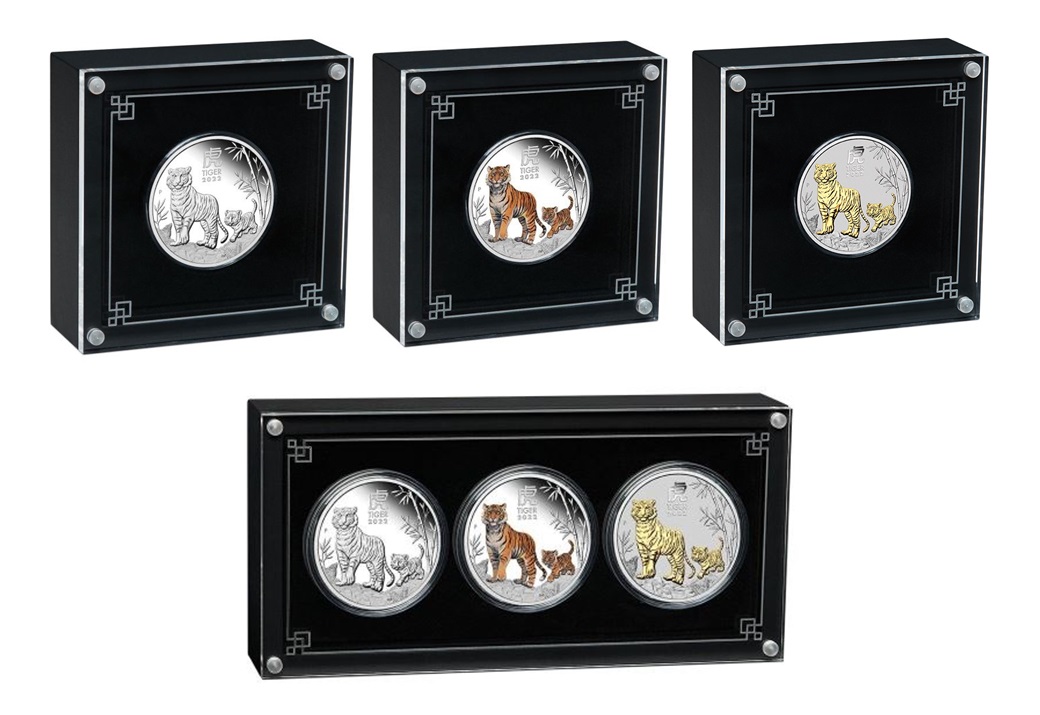 Each version is available separately or as part of a three-coin set. For subscribers of the 24-carat gold selective plating coins, a specially designed collector case is available. For additional information about all options for the 2022-dated lunar zodiac, please visit the website of the Perth Mint.