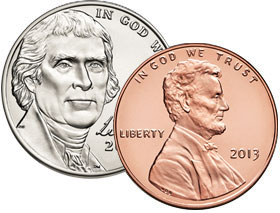 President Obama recently submitted his proposed Budget for Fiscal Year 2015 to Congress. For another year, the Budget raised the issue of potential changes to circulating coinage, although there were some key differences from prior years.

In the Budget for Fiscal Year 2011 the case was made for providing the Department of the Treasury with greater flexibility in coin composition to reduce the production costs associated with volatile metal prices and reduce the losses associated with the production of the cent and nickel. Specifically, the budget proposed providing the Treasury Department with the authority to explore less expensive materials for all circulating coins and the authority to approve alternative coinage compositions and weights for the penny, nickel, dime, quarter, and half dollar.

Subsequently, the Secretary of the Treasury was granted the authority to perform research and development activities with regards to alternative metallic coinage materials under the Coin Modernization, Oversight, and Continuity Act of 2010. However, the authority to approve any changes in coin compositions and weights remained with Congress.

The Budgets for Fiscal Year 2013 and 2014 each proposed legislation to provide the Secretary of the Treasury with direct authority to alter coin compositions. So far, no such legislation has been passed.

The recently submitted Budget for 2015 takes a different approach than prior years. It does not request Treasury Department authority to change coin compositions, but only describes research studies being conducted. Also, the penny and nickel are singled for the development of alternative options.

The full text from the 2015 Budget related to coin composition is as follows:

Assesses the Future of Currency, Including the Penny. The production and circulation of currency in the United States have been largely unchanged for decades, despite the growth in electronic financial transactions. Treasury is undertaking a comprehensive review of U.S. currency, including a review of both the production and use of coins, in order to efficiently promote commerce in the 21st Century. These studies will analyze alternative metals, the United States Mint facilities, and consumer behavior and preferences, and will result in the development of alternative options for the penny and the nickel.

Under the Coin Modernization, Oversight, and Continuity Act of 2010, the Secretary of the Treasury is required to submit biennial reports to Congress on potential new metallic materials for circulating coins and provide recommendations for any changes to the metallic content of circulating coins. The first such report was delivered in December 2012 and offered no recommendations, indicating that additional research was necessary. The next report is required to be delivered to Congress in December 2014.