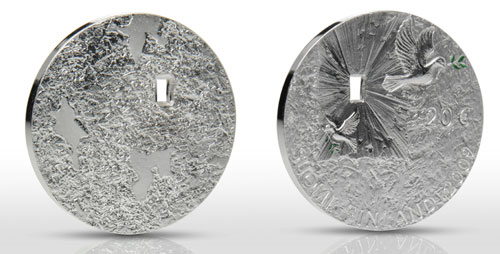 The Ethical Collector Coins are inspired by themes related to topical issues and phenomena of the moment. Themes for each coin are chosen by the Collector Coin committee set by the Finnish Ministry of Finance. The collector coin “Peace and Security” was designed by sculptor Tapio Kettunen whose proposal won the public design competition.

President Martti Ahtisaari carried out the first strike for the new coin to be produced. He has also signed the certificate of authenticity, which includes the most important message from his speech at the Oslo Nobel Peace Prize ceremony: “Peace is a matter of will.”

Maarit Aarni-Sirviö, the CEO of the Mint of Finland said, “Peace and security is always a topical theme and suitable for launching a new coin set.  We are glad that president Ahtisaari who is globally known to have led difficult peace negotiations is willing to appreciate this first strike of a coin that conveys such an important message. The Norwegian unit of our company was given the honor to produce the Nobel Peace Prize along with the medals that accompany it.”