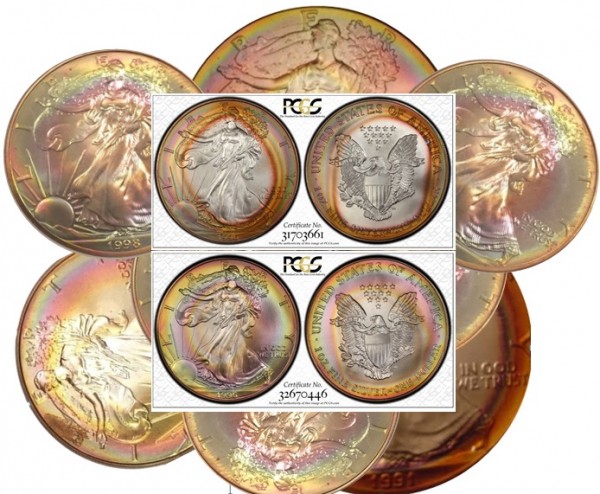 I began collecting PCI-slabbed American Silver Eagles about four years ago. I saw an entire set (1886-1999) being offered via Capitol Coin Auction on Proxibid, and I bid high on each of them, about $75 each, and won about two-thirds of the lots. Some of these had spectacular toning in Green PCI labels marked “100% white.” Here’s an example: 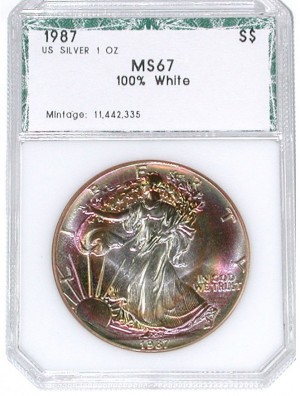 I sent the coins to PCGS, and they all slabbed, primarily because PCGS considers crossovers from any slabbing company and NGC does not. That is why, to this day, it is rare to see a PCI-rainbowed coin in an NGC holder. If you spot one marked as “artificial toning,” buy it, break it out, and send it to PCGS for slabbing. (Note: Without the 100% white holder, sometimes PCI coins come back as “questionable” from PCGS; that said, I’ve always had good luck with PCGS on natural toning because the graders there are aware of the patterns, which will be discussed more below.)

Recently I have fielded requests from well-established coin companies to sell my collection. That’s because people are paying ridiculous prices for these coins, upward of $5,000. I have a set now from 1986-2005 from mostly green-label (and some gold-label) PCI coins. All crossed over to PCGS from MS-66 to MS-69. Coins like mine are among the most vivid, most beautiful, most captivating coins ever slabbed. Show one to anyone–non-hobbyist relative to professional coin dealer–and they marvel at the natural rainbow patterns.

Here’s an example from my collection: 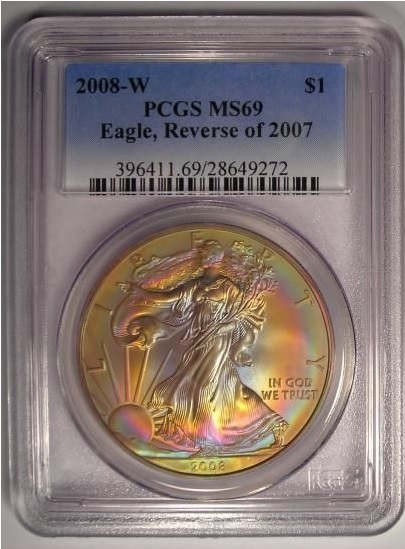 Of course, the “natural” rainbow coloring here is a patina, and a patina is, technically, a chemically-reactive contaminant on the surface of a metal. I look at it this way: Nature’s contaminants outshine man’s artificial ones, although coin doctors are getting better at their trade in mirroring the PCI rainbows. This eBay seller is being honest in letting everyone know the lots are AT. He’s perfecting his art, is all, using 2015 American Silver Eagles.

Here’s another artificially toned ASE capturing the color but not the pattern, using an older date with outlined remnants of chemical strips, responsible for the toning, on the reverse: 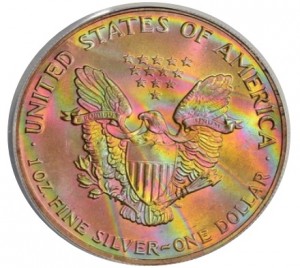 ANACS caught this one, marking it MS-60 Artificial Toning.

Before showcasing the various PCI-toned American Silver Eagles on eBay and Proxibid, let’s define the colors and then the three main patina patterns.

This is the most common target toned pastel (example from my collection): 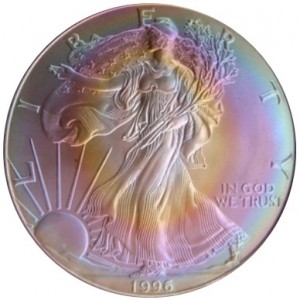 Some PCI rainbows have more defined targets, like this one, again from my collection: 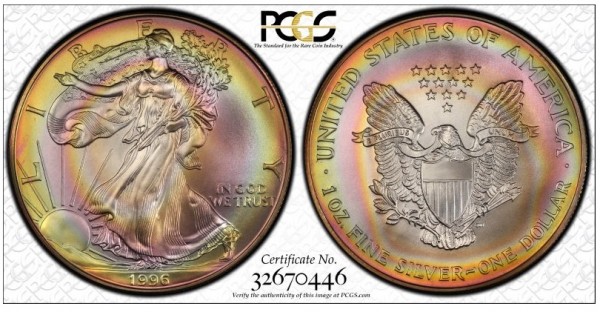 Some PCI-rainbows have outlined circles, as if an artist was drawing a “radar” pattern: 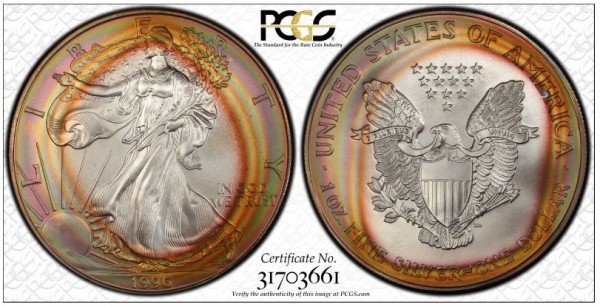 Some combine the pastel target colors with radar outlines: 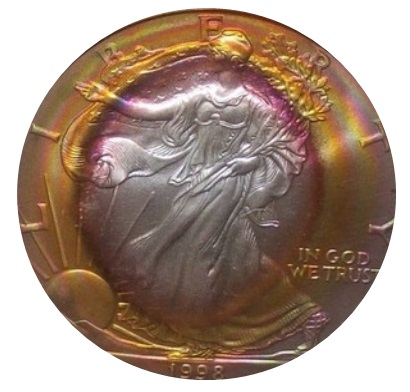 In many ways, this last example above is the most-coveted pattern.

Because dozens if not hundreds of such coins have crossed over recently to PCGS, prices for PCI-rainbowed Eagles continue to rise. Some doctored coins occasionally fool the graders. This one attempts to capture PCI coins whose entire surface is toned. For some reason it was slabbed MS-69 by PCGS: 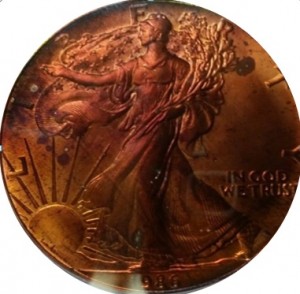 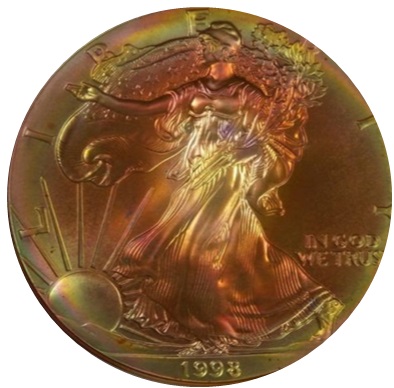 These filled-patterned PCI coins used to sell for about $300. Now they are going for $600-plus.

Common pastel-colored PCI coins used to sell for about $75. Here’s an example from my collection: 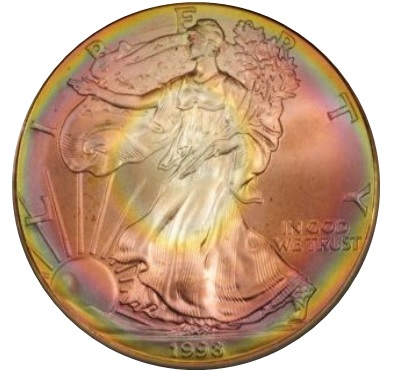 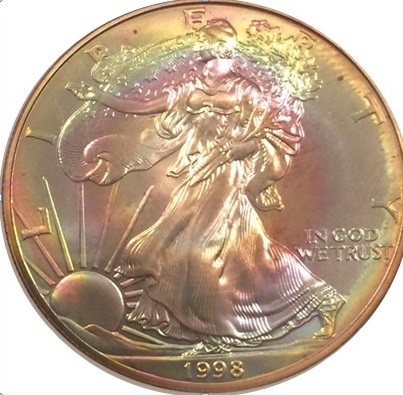 Not all PCI-toned coins, even in PCGS holders, are worth the money. To understand why, you have to comprehend patinas. Seamless toning is a combination of the green PCI label interacting with the impurities of the silver in a perfect balance. When that happens, there is little spotting, as in my $75 coin above.

When the impurities of the metal interact at higher levels than the chemicals of the label, the results diminish the worth of the coin, although sellers (and buyers) seem obvious of that fact. Here’s an example with a distracting silver contaminant on the B of LIBERTY: 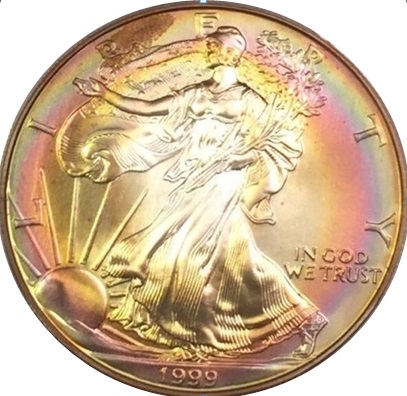 Sometimes the label interacts poorly with the silver, as in this example below, leaving residue on the rising sun and between some of the sun’s rays, as well as near the R of LIBERTY: 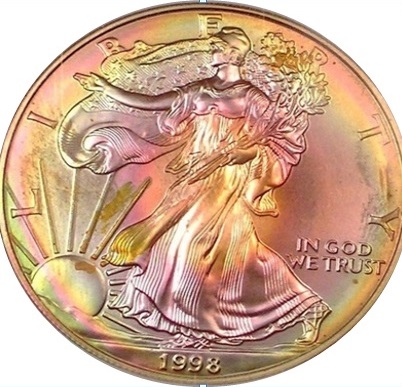 These are far less desirable for the serious buyer and collector of PCI-toned Silver Eagles.

In conclusion, here are other factors associated with PCI-labeled coins.

For starters, the later gold labels in PCI holders usually react more subtly than the older green labels, although I have seen banded radar ones, too, rivaling that of green-labeled holders. Here’s a typical gold label example of toning: 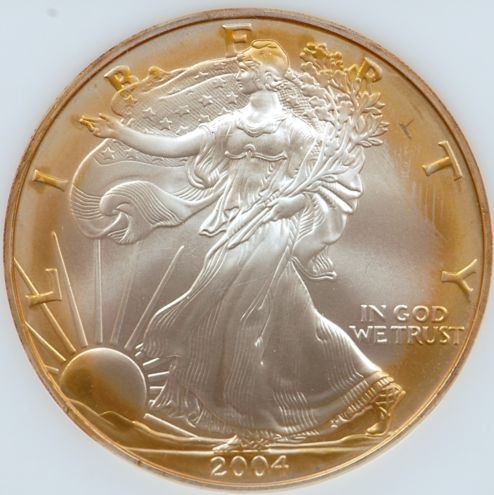 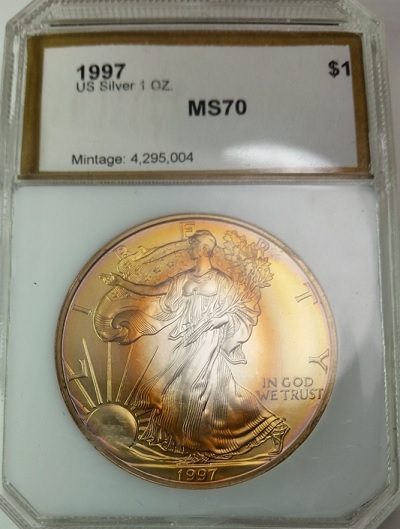 Not all PCI-slabbed coins tone well, so don’t believe the hype by sellers that their coins have fantastic toning. Here’s a typical mediocre example: 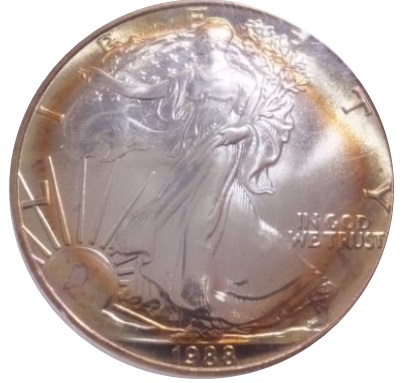 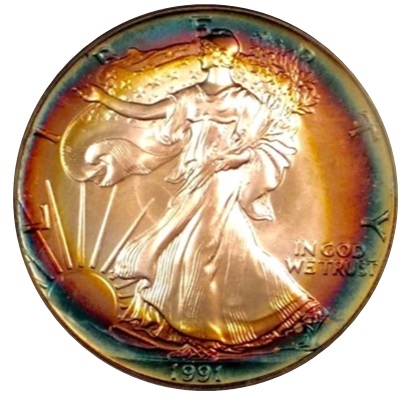 The most coveted PCI-toned coins are Uncirculated and not Proofs, which tend to tone more subtly with less defined markings: 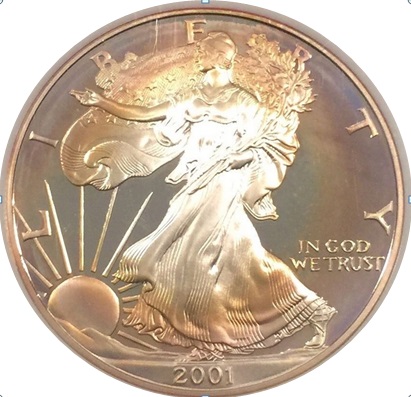 Keep your eye out for Morgan dollars in green PCI slabs. I just won this one for $184. If it slabs PCGS MS-64, I’ll have a coin worth much more than that, given the high prices people are paying for toned Morgans in GreatCollections and Heritage auctions. 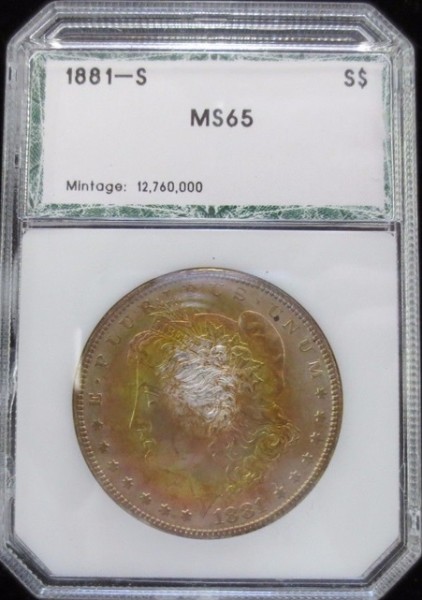 The best place to find reasonably priced PCI-toned Eagles, Morgans, and other coins in green labels are at coin shows and coin shops. Typically, some dealers are not yet wise to the competition for these on the Internet.

Also, you can expect to pay a higher premium for PCI-toned coins in years other than 1998 and 1999. Those are most common (and often the most spectacular) PCI-toned coins because of impurities in those batches of planchets.

Do you have a PCI-toned coin in your collection? If so, share the story behind it.