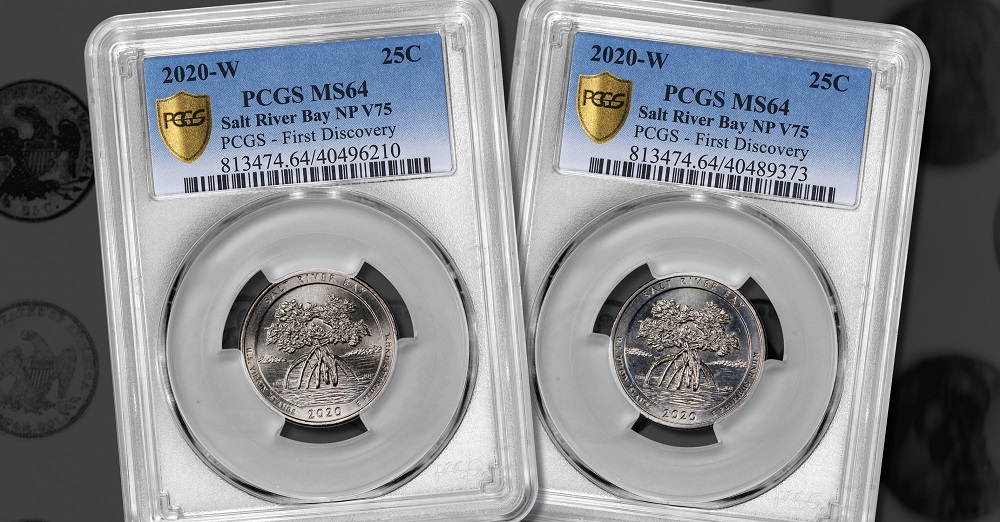 (Santa Ana, California) August 7, 2020 — The PCGS 2020 Quarter Quest continues at Professional Coin Grading Service (PCGS) with the release of the 2020-W U.S. Virgin Islands Salt River Bay National Historical Park and Ecological Preserve Quarter, which was released by the United States Mint on June 1. The 2020-W U.S. Virgins Islands Salt River Bay Quarter is the 53rd coin issued in the long-running American the Beautiful Quarter series that began in 2010 and ends next year.

In 2019, the U.S. Mint began striking a limited run of circulating quarters at the West Point Mint bearing the “W” mintmark. Mintages of these scarce “W” mint quarters have been capped at just two million specimens per design so far, and these special “W” Quarters have been released only in circulation; they can’t be bought in U.S. Mint Uncirculated Sets, Proof Sets, or any other numismatic offerings. Instead, U.S. Mint officials have been filtering these West Point quarters into circulation by peppering the scarce coins into rolls and bags of quarters originating from the Philadelphia and Denver Mints.

To help raise awareness of these special coins and entice more individuals to get involved in coin collecting, PCGS launched Quarter Quest. This initiative, now in its second year, offers an array of bounties and other special incentives for those who discover each of the different W-Mint quarters as they are released.

“The U.S. Mint has really helped spark a lot of interest in numismatics with these circulating rarities,” says PCGS President Brett Charville. “We want collectors to realize the value of these and other coins in circulation with PCGS Quarter Quest. Since 2019, PCGS Quarter Quest has awarded some $20,000 in bounties and other rewards to collectors around the United States and also offered a variety of limited pedigrees and special labels.”

For the 2020-W U.S. Virgin Islands Salt River Bay National Historical Park and Ecological Preserve Quarter, PCGS received two quarters qualifying for the cash prize and the coveted PCGS First Discovery pedigree. PCGS is splitting the 2020 Quarter Quest $2,000 prize for this coin between two winners, both of whose 2020-W quarters received a grade of MS-64.

Anthony F. of Nevada says this 2020-W quarter has been the find of his lifetime. “I’ve been collecting coins since 1967, when my grandfather brought home rolls of pennies from the bank for me to look through.” The five-year PCGS Collectors Club member says he began looking for “W” quarters since their release in 2019 but had come up dry until a fortuitous stop at a filtered water dispenser. “My wife and I were going to make a pot of coffee and needed some ‘good’ water,” says Anthony.

He drove to the nearest filtered water machine but was initially dismayed to find a short line of people there ahead of him. “Now, I’m an impatient person normally, but I decided to wait in my car and was the third person in line. I go up, order a jug of water for 35 cents, put a dollar in, and get 65 cents back in change — two quarters, a dime, and nickel.” Both quarters appeared really “shiny” to Anthony, causing him to inspect them closer. “Sure enough, one was a ‘W.’ I was floored. I went online to see what they were selling for and went to the PCGS site and found out more about The PCGS Quarter Quest there.”

He says he was a little surprised that the bounty was still out for the Salt River Bay quarter, which had been released in June. So, he and his wife sent their 2020-W quarter to PCGS with the hopes of being the first to submit one of that design. Anthony was thrilled when he learned that his quarter was tied among first place. “I want to put the coin up in a special frame on the mantle with a wreath around it,” he laughs. “This is the coin I’ve been waiting my whole life to find.” Adds Anthony, “It goes to show you don’t always have to search rolls to find good coins — you can still find them in ordinary circulation.”

While Anthony is correct — that you can find scarce and valuable coins in otherwise common pocket change — there are also many amazing finds to be made through roll searching. And that’s how Kenny R. of Arkansas found his 2020-W Salt River Bay quarter. But finding a 2020-W quarter that qualified for the grand prize and a PCGS First Discovery pedigree didn’t necessarily come easily for him.

The longtime coin artist had ventured into coin collecting over the past year or two. “I became a silver hunter,” he says, looking through bankrolls of dimes, quarters, and half dollars for any made from silver. “I go to the bank and get a couple grand in rolls at a time.” Over the past year, he has landed many rolls worth of W-Mint quarters, each worth $15 to $20 or more due to their scarcity.

“Then last week I found the 2020-W [Salt River Bay] quarter and started looking up information to see what the coin was worth,” he remarks. “My 18-year-old son then told me to send the coin in for the PCGS Quarter Quest, saying ‘Dad, you gotta do it.’” So, he did, becoming a PCGS Collectors Club member at the same time. And, sure enough, he was glad he did. Kenny exclaims, “It was definitely worth it!”

Professional Coin Grading Service (PCGS) is a premier third-party coin and banknote grading company that was launched in 1986. Over nearly 35 years, PCGS has examined and certified some 44.2 million U.S. and world coins, banknotes, medals, and tokens with a combined value of more than $41.3 billion. For more information about PCGS products and services, including how to submit your coins for authentication and grading, please click here or call PCGS Customer Service at (800) 447-8848.