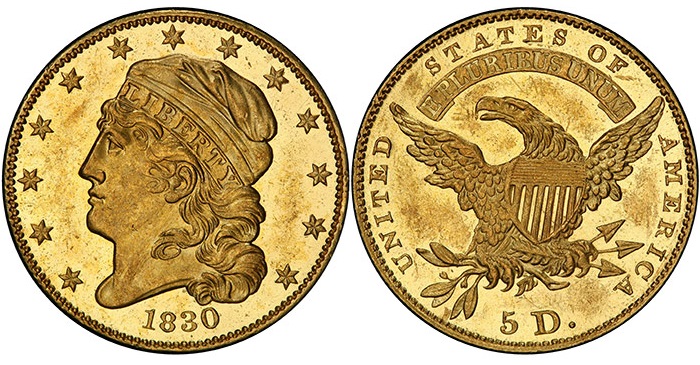 Rare coins are stars in their own right, but the 1830 Proof $5 gold half eagle is in a class all by itself. With a mintage of only three coins, the 1830 $5 Proof is one of the most elusive of all half eagles. It dates to a period when Proof coinage was struck in minimal numbers, often at the behest of wealthy coin collectors or for presentation to certain government officials and dignitaries. At the time, such Proofs would have been struck on specially polished planchets by polished dies on medal presses.

There are two varieties of 1830 Proof half eagles, one exhibiting a large “D” representing the denomination, and the other featuring a small “D.” In 2019, PCGS certified the only known Proof example of the Large “D” JD-1 (BD-1) as PR-62, and the coin resides in a prestigious Gold Shield holder. Meanwhile, two examples of the counterpart 1830 Small “D” JD-2 (BD-2) are known; one example belongs to the Durham Museum in Nebraska while the other has passed through various famous hands, including Louis Eliasberg, John H. Clapp, Charles G. Wright, Byron Reed, and Buddy Ebson — yes, that Buddy Ebson.

The famous actor, who portrayed Jed Clampett on the long-running CBS sitcom The Beverly Hillbillies, was one of the most famous of Hollywood’s numismatists. Upon selling his 1830 Small “D” half eagle and other coins at a Superior auction in 1987, Ebson told the press that “coins are loaded with history. When you hold something made 600 years before Jesus was born, you think of all the people who touched it over the years — that’s what makes coin collecting an exciting growth experience.”

Few coins are as exceptionally rare as the 1830 Large “D” Proof half eagle. Not only is this coin unique in Proof, but the 1830 Large “D” is also scarce even in business-strike format, with but a tiny handful of specimens known. Thus, these 1830 half eagles garner huge bids when any examples are offered for sale. The 1830 Large “D” Proof half eagle has a colorful history, once believed to have resided in a Midwest collection before selling to legendary coin collector Virgil Brand in 1906 for $33. Over the next century, the coin passed through several hands before realizing $229,125 in a 2014 Heritage Auctions event. It most recently appeared at the Heritage Auctions event held concurrently with the 2019 American Numismatic Association World’s Fair of Money Show in Rosemont, Illinois, where the unique half eagle commanded $300,027.60.

Any collector would be proud to own the Proof 1830 Large “D” half eagle, a piece that serves as a plate coin in the Encyclopedia of U.S. Gold Coins by Jeff Garrett and Ron Guth. The coin is a gorgeous representative of an early Proof half eagle, with fully struck stars and squared-off rims. Its warm yellow-gold surfaces have very light hairlines and minor marks in the field, and there are slight weaknesses in the centers of the coin’s two sides. But overall it is an excellent Proof specimen with lightly frosted devices hinting of cameo contrast against fully mirrored fields. The inscriptions LIBERTY and E PLURIBUS UNUM are reflective but offer lightly frosted glaze. Interestingly, the reverse die used to strike this specimen was used for striking a small number of 1829 Small Diameter half eagles and exhibits some die lapping or mint-made abrasion lines but otherwise is absent of any other die issues, including die cracks.

There’s a reason that many collectors seek not just rare, early Proof half eagles but all pre-1933 $5 gold coinage in general. Half eagles are a cornerstone of high-end coin collections in part because they represent one of the only gold denominations struck by the United States Mint year in, year out. Unlike quarter eagles, eagles, and double eagles — the latter minted for circulation beginning only in 1850 — the half eagle was produced almost every year since its inception in 1795 right up through the early 1930s, when the last circulating United States gold coinage was struck. So, collectors with deep pockets and a desire to build a large set of gold coins can potentially assemble a collection spanning more than 130 years by building a comprehensive run of half eagles.

Those wanting a truly complete set of half eagles also include Proofs, and the linchpin 1830 Large “D” Proof looms large on collectors’ want lists. Its extreme rarity also makes it among the most challenging pieces to acquire. But it is a necessary addition to any collection of Proof half eagles and a key coin for which registry set collectors vie. The coin’s elusiveness influences fierce bidding wars for the 1830 Large “D” half eagle on the seldom occasion it surfaces on the auction floor. In more than a century, this piece has been offered for sale only a handful of times. For the few collectors who have had the fortunate chance to acquire it, such an occasion may be the opportunity that knocks but once in a lifetime.