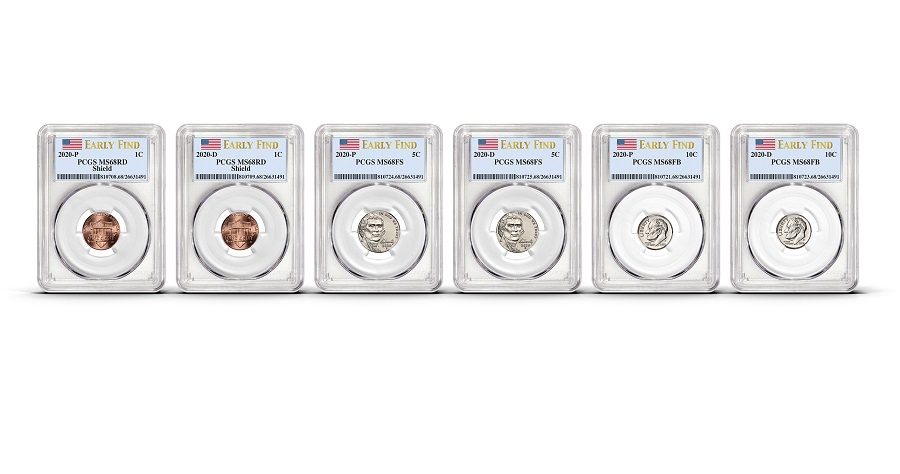 (Santa Ana, California, May 30, 2020) — The Professional Coin Grading Service (PCGS) Coin Quest 2020 has come to an exciting end with the recognition of two winners! The quest, which kicked off early in the year, challenged collectors to find circulating examples of 2020 Philadelphia and Denver cents, nickels, and dimes and to be among the first to submit them to PCGS for a coveted PCGS Early Find label.

Collectors were then tasked with completing the six-coin set in the PCGS Set Registry for a chance to win up to $2,500. The official deadline was May 15, 2020, and two skilled collectors were notified of their victories.

PCGS Coin Quest 2020 had two available prizes: $2,500 to the collector with the top-ranked set and another $2,000 to a lucky random collector who completed the set before the deadline. The two winners wished to stay anonymous but shared the story of their journeys in coin collecting.

The winner of the highest-ranking complete set was an anonymous Northern California resident who has been a collector for about 55 years. The collector, known as “Branzo99” on the PCGS Set Registry, started their adventure when their aunt, who is an avid collector, taught them about silver coinage.

“She thought they would be valuable in the future and was, obviously, quite right,” Bronzo99 shared. “I inherited our joint collection and have expanded it over the years. My interest in graded coins has been piqued recently when trying to collect additional coins of interest… Since rarity and condition are such inherent contributors to value, I figured I could search for how rare certain coins were, but buying them ‘sight unseen,’ or with poor photographs, would be very risky financially. In addition, I found some unusual coins in my own collection and wanted to have them verified. Thus, my recent increase in interest in numismatics came through this combination of factors.” The most incredible part about Branzo99’s winning set is that all of the coins entered their hands by way of coin roll hunting!

The second winner of the PCGS Coin Quest 2020 competition, a Set Registry member who asked to be identified as Kamcoins, has been a collector for 28 years and was inspired by their great grandmother. “In 1992, my great grandmother was searching for pennies that had rotated dies, which she claimed were worth lots of money. I tried to find information about the occurrence of die rotation from a local coin dealer and was directed to ‘The Red Book’ (A Guide Book of United States Coins), where I discovered there were other varieties to search for, like the 1955 and 1972 (Lincoln cent) doubled dies. Shortly after, my other grandmother noticed I was reading my coin book all the time and decided to give me a collection of coins she had received from her father. One coin in that collection, a beautiful EF example of a 1798 Large cent, sparked my interest [in] numismatics.”

While PCGS Coin Quest 2020 has come to a close, the PCGS 2020 Quarter Quest is in full swing with two of the five 2020-W America the Beautiful quarters already in circulation and another to be released in early June. Collectors looking to participate can find more information on our website.

Professional Coin Grading Service (PCGS) is a third-party coin and banknote grading company that was launched in 1986. Over nearly 35 years, PCGS has examined and certified some 43.7 million U.S. and world coins, medals, and tokens with a combined value of more than $38.5 billion. For more information about PCGS products and services, including how to submit your coins for authentication and grading, please visit here or call PCGS Customer Service at (800) 447-8848.

Inside the Mint: Privy marks on coins