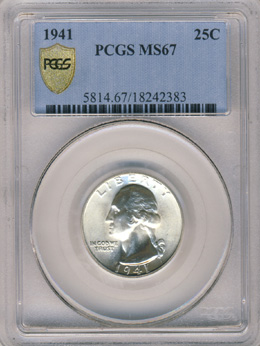 Editor’s Note: Coingrader Capsule columnist Michael Bugeja published a commentary in the April 18 issue of Coin World questioning a PCGS policy banning “plus” designations at the Economy service level and an NGC policy banning CrossOver coins from all grading companies, except PCGS. He also followed up on that commentary, reporting for Coin Update News in this post. Bugeja and Coin Update also were among the first to criticize pricing aspects of PCGS Secure Plus in posts in March 2010.

PCGS is to be applauded for a series of “exciting new developments” concerning coin submissions, and this time we agree, primarily because the company is responding to collector needs rather than to marketing considerations.

We just received an email from President Don Willis, who discusses changes in Plus grades, Secure Plus and other policy changes sure to advance PCGS’s reputation as the top coin-holdering company. And what’s more, Willis solicits feedback in an open, responsive manner.

We’re fully supportive of these changes and fee schedules for these reasons:

In other words, PCGS not only is advancing numismatics by discarding pricey marketing advice–during a recession, no less; it is walking the walk about coin doctoring and counterfeiting rather than talking the talk (again, as marketers typically do).

As evidence, consider another change that PCGS is instituting, in Willis’ own words:

“All Chinese coins must be submitted through the Secure Plus service. As part of Secure Plus each coin is scanned, photographed, sniffed and undergoes a metal composition analysis. The metal testing is very helpful in detecting counterfeits. The availability of a photograph is also very effective in deterring counterfeiting. All valid certification numbers can be checked on our website. If there is a photograph (which is always the case for Secure Plus coins) the photograph will be displayed next to the coin information. We believe this change will go a long way towards combating Chinese counterfeits.”

These changes come as competitor NGC (often out in front of competitors concerning customer service) takes a backward step by banning CrossOver grading from other companies (including ANACS and ICG) while allowing only PCGS for this service–a suggestion by Customer Service due to too many complaints. See our discussion about that by clicking here. This is the type of marketing advice that NGC should have rejected outright in the name of numismatics rather than sales.

NGC also is charging an $8 handling fee (as does PCGS) without supplying dealers and Collector Society members with free boxes and submission materials (such as pre-glued cardboard mailer sheets) as PCGS does.

As this post documents, PCGS has taken a big step forward with these new policies in establishing itself as the premier coin holdering company. NGC may be a close second, but ANACS is making big gains at the moment by putting customers first, as in 10 silver coins graded at $11.90 each with free return shipping–graded between 22-30 days.

Enhancing service while advancing numismatics will be the name of the holdering game during the recession and beyond. We’ll be monitoring policies to ensure that collectors rather than their pocketbooks come first.