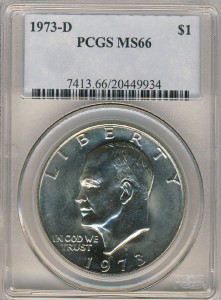 PCGS’s New Year’s Resolutions for 2013 are simpler, more efficient services, including reconsideration, restoration and the promise of optional inclusion of the company’s coin numbers on submission forms.

Fees will go up modestly, however, beginning next year.

In an email blast under President Don Willis’ name, he noted that PCGS hasn’t raised fees “for many years. After the financial crisis of 2009, the last thing the coin market needed was higher grading service fees. So we held the line on prices. Now we want to add services and improve things so we have instituted a small price increase for 2013 submission fees.”

Current fees for modern coins now are $14 per coin, modern; $18, economy; and $30, regular. Each of those prices jump $2 per coin in January. Likewise, Priority Mail postage for submissions also will rise $2 in each category, not mentioned in the email blast.

Beginning on Jan. 1, 2013, the company will launch its reconsideration service. This reportedly is “a direct response” to all who asked for a regrade service in which PCGS does not break a coin out of its old holder unless the grade will go up. The new service sets the benchmark for cracking out the coin at one full point. In other words, the original holder will not be destroyed if the coin grades “a plus” within the same grade level–an MS65 grading MS65+.

Presumably, that means no plus grades will be awarded within the same grade level, even if the coin merits that plus upgrade.

I concur with that, by the way. I wouldn’t want my Old Green, Doily or Regency Holder cracked out for a plus. Other alternatives seem problematic: The company would have to add the plus in its databanks, but not on the label, essentially only upgrading the certification online. But then the label and cert wouldn’t match. And I would not want a sticker indicating the “plus” upgrade. 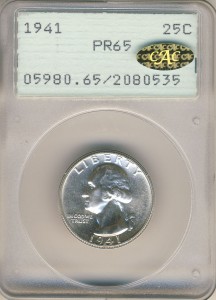 Speaking of stickers, this new PCGS service should get a lot of business. Club members and dealers have told me that they hesitated to send PCGS coins in original holders, preferring to send them to Certified Acceptance Corporation (CAC). I, for one, refuse to send in some of my PCGS green and short-lived holder designs for regrading, even though they might be worth the re-inspection. I’d rather have an OGH with a CAC sticker than a blue PCGS holder with a plus within the same grade.

As such, this new service addresses that issue and should result in more customer satisfaction for club members and dealers.

The fee for reconsideration will be the usual regrade fee plus “1% of value (based on PCGS Price Guide or the declared value whichever is higher),” the company said in its release. The 1% seems reasonable because of the company’s “Guarantee Premium” associated with increased liability on an upgraded coin. (Click here for more information on the PCGS Guarantee.)

PCGS coin restoration also begins Jan. 1, 2013. PCGS dealers and club members have wondered why the company didn’t offer this as NGC does with its Numismatic Conservation Service.

Willis states that the service “will be provided only for those coins which we believe have problems that can be alleviated by professional restoration, basically mild cleaning. It is extremely important to note that this isn’t a service to arbitrarily clean every coin in existence and make them all ‘white.'”

Willis adds: “There are certain practices that are accepted in the numismatic community (‘dipping’ silver coins being a prime example) and those are the only things we will do for you. So for example, if you have a silver coin with problem spots or some ugly toning areas, we will professionally ‘dip’ the coin for you if we think the coin will benefit, but we won’t ‘dip’ a coin with nice natural toning.”

The restoration service is offered for PCGS and uncertified coins only.

I can see the utility of this. For instance, I have a PCGS-holdered Morgan graded at MS65 with ugly black toning that sometimes develops. So this might be a candidate for dipping. I wouldn’t want to crack out that coin by myself and dip it, even though I might be able to do that “professionally”; then I would have to resubmit the coin to PCGS as raw. Meanwhile, I have lost the PCGS Guarantee by this process.

So this service also is a “plus” for coins that fall in that category.

Here are criteria for restoration:

He stated that “filling in the PCGS coin number” would be optional. “And you’ll note on the new submission form we have combined last year’s ‘Ultra Rarity’ and ‘Rarity’ services into one submission line, and the two types of reholder services into one service. These are just the first few of many things we will be doing during the next 12 months to make it as simple as possible to use our services.”

The company also plans to improve its turnaround times and customer service. “We have added one new dealer liaison person, and we are beefing up our operations staff.”