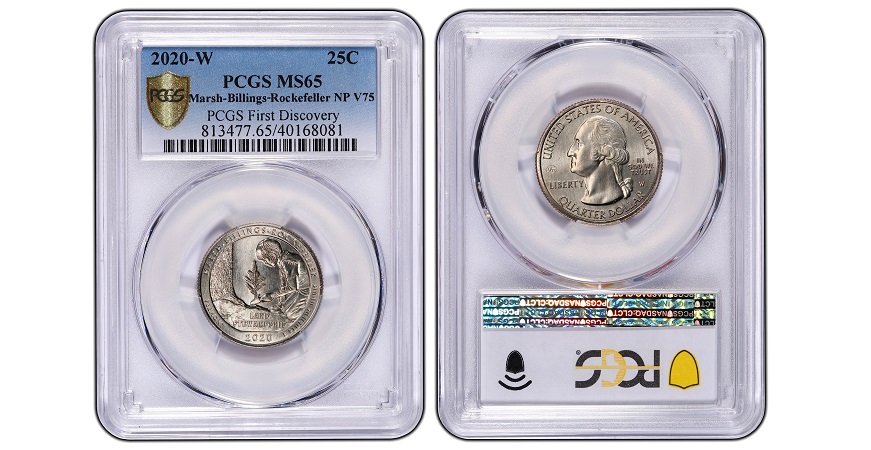 (Santa Ana, California — September 29, 2020) — The Professional Coin Grading Service (PCGS) Quarter Quest 2020 recently yielded two more winners with the release of the 2020-W Vermont Marsh-Billings-Rockefeller National Historical Park Quarter, released by the United States Mint August 31, 2020. The coin, which has a mintage of just two million pieces and bears a “W” mint mark from the West Point Mint, was sprinkled in rolls of new 2020 quarters from the Philadelphia and Denver Mints and distributed throughout the United States. The coins are not offered in any Proof Sets, Uncirculated Sets, or other United States Mint products and can only be found in circulation.

The 54th quarter issued in the America the Beautiful quarter series launched in 2010, the 2020-W Vermont Marsh-Billings-Rockefeller National Historical Park quarter features a special one-year-only “V75” privy mark honoring the 75th anniversary of the Allied victory in World War II. The privy mark is included on all 2020-W Quarters, which total 10 million and honor National Park of American Samoa in American Samoa, Weir Farm National Historic Site in Connecticut, Salt River Bay National Historical Park, and Ecological Preserve in the U.S. Virgin Islands, and Tallgrass Prairie National Preserve in Kansas, the latter of which will be released on November 16, 2020.

“The 2020-W quarters have generated so much new interest in coin collecting,” remarks PCGS Director of Marketing Heather Boyd. “We wanted to help promote the joy and excitement of the hobby by launching the PCGS Quarter Quest. Since 2019, we’ve awarded more than $20,000 in prizes to coin collectors around the United States and are also offering special pedigrees and labels for a limited time.”

The most recent winners of Quarter Quest 2020 are Karl P. of Maryland and John B. of the southern United States, whose 2020-W Marsh-Billings-Rockefeller quarters grade MS-65 and MS-66, respectively. The winners are splitting a grand prize of $2,000.

“I felt like a fish out of water,” says John of the excitement he felt in finding the 2020-W Vermont quarter. “The adrenaline, excitement, the wait, the rush, the anxiety, anticipation, the joy, and disbelief — all at the same time!” He was a long time waiting for the moment, as he is a long-time collector. A fan of Standing Liberty quarters, error coins, and other pieces, he works in the food industry, though his job affords him much time to travel and also search through rolls. “Whenever I visit my banks, I always ask for rolls and boxes to take back home and search.” He picked up three boxes of quarters during a 72-hour span in Florida, Mississippi, and Alabama the weekend before his discovery.

“They say, things happen when you aren´t looking, and in this case, I wasn´t looking for the [2020-W] Marsh-Billings-Rockefeller quarter — I was still looking for the elusive Salt River Bay quarter and everything in between, especially with the [PCGS] countdown for the Early Find Label submission. When I got home I didn´t really open the boxes until Monday, and when I opened the second box and [it] was full of new [2020] Marsh-Billing-Rockefeller quarters and saw a ‘W’ ender [a W-mint marked specimen at the end of one of the rolls], that’s when everything turned upside down.”

His next thoughts? “How many are there? What to do now? And then it was ‘ohhh, I need to send them…” And send one he did — to PCGS as a 2020 Quarter Quest submission. “One little detail in the commotion was that I never marked the quarter boxes, and thus I believe the box I got in Florida was the one with the 2020 Marsh-Billings-Rockefeller National Historical Park quarters.” The Tom Hanks fan who loves the widely acclaimed 1994 movie Forrest Gump, in which the actor stars sums up his numismatic experience this way: “The hobby is like a box of chocolates… You never know what you are going to get — and that’s all I have to say about that!”

Karl didn’t know what he was going to find searching through bank rolls, but he kept his eyes on the prize — that being a 2020-W quarter. “It has been a crazy year for coin roll hunting!” he says. “COVID-19 regulations here in Maryland have resulted in most bank lobbies being closed and therefore [it’s] impossible to obtain quarter boxes. In addition, the Federal Reserve declaring a coin shortage a few months ago throughout the U.S.A. has made it difficult to pay cash for purchases making it extremely difficult to obtain any coins let alone the coveted 2020-W quarters.”

However, there was one bank near him that kept its lobby open, allowing Karl to purchase and swap boxes of quarters. “Most of the boxes are old quarters, which still yield an occasional 2019-W quarter, and to date, I haven’t gotten any 2020 [American Samoa] ‘Bat’ or [Connecticut] ‘Weir’ Quarters. However, recently I have gotten a total of six 2020 Salt River Bay [National Historical Park and Ecological Preserve] Quarter boxes, but none of them had any W Quarters.” He adds, “I was getting extremely discouraged; however, I kept at it and never gave up the search.”

Fortunately, Karl struck it rich — ironically, not via a roll of quarters. “Luckily, I was able to find a 2020-W Marsh-Billings-Rockefeller [National Historical Park] quarter last week, and it came from a local convenience store! I couldn’t believe it, and I submitted the quarter expecting to be just a little late for it to qualify as a First Discovery quarter. I figured the worst-case scenario was that I would get the First Week of Discovery label. Imagine my surprise when I was informed that, in fact, I was one of two lucky winners!”

“I really appreciate PCGS offering this contest for everyone to participate. As a two-time winner, I can tell you that I began my coin collecting hobby just last year because of the Quarter Quest, and it has been a blast!” says the co-winner of the 2019 PCGS Quarter Quest, when he submitted the First Discovery 2019-W Frank Church River of No Return Wilderness quarter. “I have been hooked ever since my first find, which was a 2019-W Northern Mariana American Memorial National Park quarter.”

Karl attended his first coin show last year, and he says the highlight of that experience — visiting the Whitman Expo in Baltimore — was attending the PCGS Luncheon. “PCGS is a first-class company with a tremendous reputation and offers collectors the best value for graded coins.”

Professional Coin Grading Service (PCGS) is a premier third-party coin and banknote grading company that was launched in 1986. Over nearly 35 years, PCGS has examined and certified some 44.7 million U.S. and world coins, banknotes, medals, and tokens with a combined value of more than $41.8 billion. For more information about PCGS products and services, including how to submit your coins for authentication and grading, please click here or call PCGS Customer Service at (800) 447-8848.