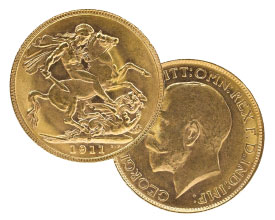 The fear running through the Greek populace is that the nation’s government may default on some of its debts.

Since 1965, the Greek government has imposed restrictions on trading British Sovereign gold coins (gold content .2354 oz).  Despite those restrictions, the Bank of Greece reports that it is selling an average of more than 700 coins per day to worried Greeks.

In the first four months of 2010, the Greek central bank sold more than 50,000 sovereigns at its main downtown Athens office.  Bank officials estimate that at least 100,000 other coins changed hands on the black market.  The Bank of Greece has received as much as $409 per coin, which works out to a price of more than $1,700 per ounce of gold!  Prices paid on the black market are reckoned to be even higher.  A popular spot for street vendors to sell their coins is near the Athens Stock Exchange.  There the traders wait for citizens to bring payments received from unloading their paper assets like stocks and bonds.

The US government and some state governments such as California are in financial straits as bad as or even worse than Greece.  How long will it take before American buyers will have to wait in lines to pay outrageous premiums for what are now bullion-priced gold and silver coins?  More than one analyst thinks those days will come within a few months or sooner.

Where does the US government and its trading partners get their hands on enough physical gold to help suppress gold prices?  Reg Howe, an analyst who writes at www.goldensextant.com, once sued the Federal Reserve, other central banks and official agencies, and major bullion banks.  He scrutinizes the twice yearly report on derivatives issued by the Bank for International Settlements.  The December 31, 2009 report was released two weeks ago.

Howe thinks he can trace one means by which physical gold is being leaked onto the market without any apparent source.  A central bank can lend gold to a major bank.  Under IMF rules, the central bank is able to continue to report loaned gold as still being in its vaults.  The bank then can sell its gold to the GLD exchange traded fund in return for shares of GLD.  This way, the bank theoretically has about netted its gold position.  Then GLD can lease the gold, which is authorized under GLD’s operating documents, which means that GLD can still claim to have all of its gold liabilities covered.  It would be the lessee of the gold that would sell it onto the physical market, thereby putting some downward pressure on prices.  In theory, the central bank, the bank, and GLD all have their positions covered.  However, if the lessee is unable to repay the gold someday, and rising gold prices increase the risk just such an occurrence, then there could potentially be a domino effect of multiple parties suddenly finding out they are in default of their liabilities to produce the physical gold they have reported as being an asset.

As each day passes, the risk is growing that owning any form of “paper gold” could turn out to be as worthless as the paper currencies used to purchase it.  While you still can, you should protect yourself by converting such “assets” into real physical gold.