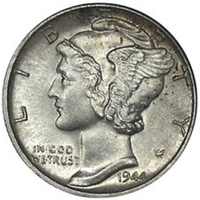 The prospects for the US Mint issuing American Palladium Eagles just got better. A bill introduced by Rep. Denny Rehberg of Montana seeking to authorize the coins was passed in the House of Representatives on September 29, 2010.

H.R. 6166 American Eagle Palladium Bullion Coin Act of 2010 would authorize a new series of one ounce .9995 palladium bullion coins struck by the United States Mint. The coins would bear designs based on the work of famed coin designed and medallic artist Adolph A. Weinman. Specifically, the obverse design would be based on the Winged Liberty or Mercury Dime, struck for circulation from 1916 to 1945, and the reverse would feature a design from the 1907 American Institute of Architects Medal. Both would be rendered in high relief.

Authorization is also included for the production of proof and uncirculated versions of the Palladium Eagles. An interesting requirement of the collector coins is that, to the greatest extent possible, “the surface treatment of each year’s proof or uncirculated version differs in some material way from that of the preceding year.”

One small amendment was made to the original text of the bill. Rather than production beginning “not more than 6 months” after the submission of a required marketing study on palladium bullion coins, the time line has been extended to “not more than 1 year.”

The bill must next pass the Senate and then receive the President’s signature in order to become law.