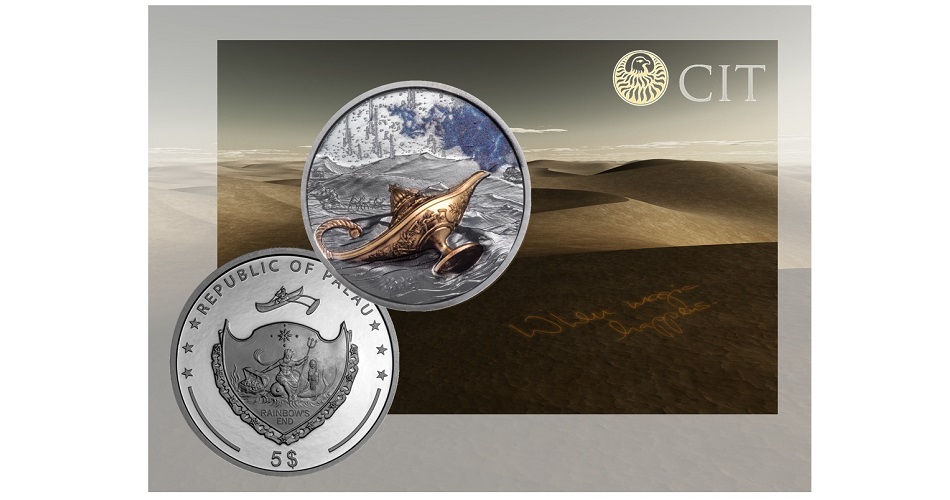 The Republic of Palau’s treasury has issued new silver coins that feature the exquisitely detailed magic lamp that is the focus of the tale of Aladdin and its discovery, which grants him three wishes. The tales of One Thousand and One Nights is a collection of Middle Eastern and Indian stories, whose original authorship has become unclear or obscured over time. However, these tales still fascinate the listener with fairy tales, romances, legends, fables, legends, anecdotes, and adventures — real or imagined — but undoubtedly exotic.

One of the most famous stories is Aladdin and his wonderful, magical lamp, which he discovers in an abandoned cave and is ultimately granted three wishes, thanks to a genie living in the lamp. Finally, after a series of misfortunes and treachery, the young man ends up married to the powerful sultan’s daughter and becomes sultan himself, again thanks to the magic of the genie who lives in the lamp. Before the lamp was found in the cave, it was somewhere strewn on the sands of the desert where it had been cast away by a more powerful sorcerer who was intent on punishing and trapping the genie. 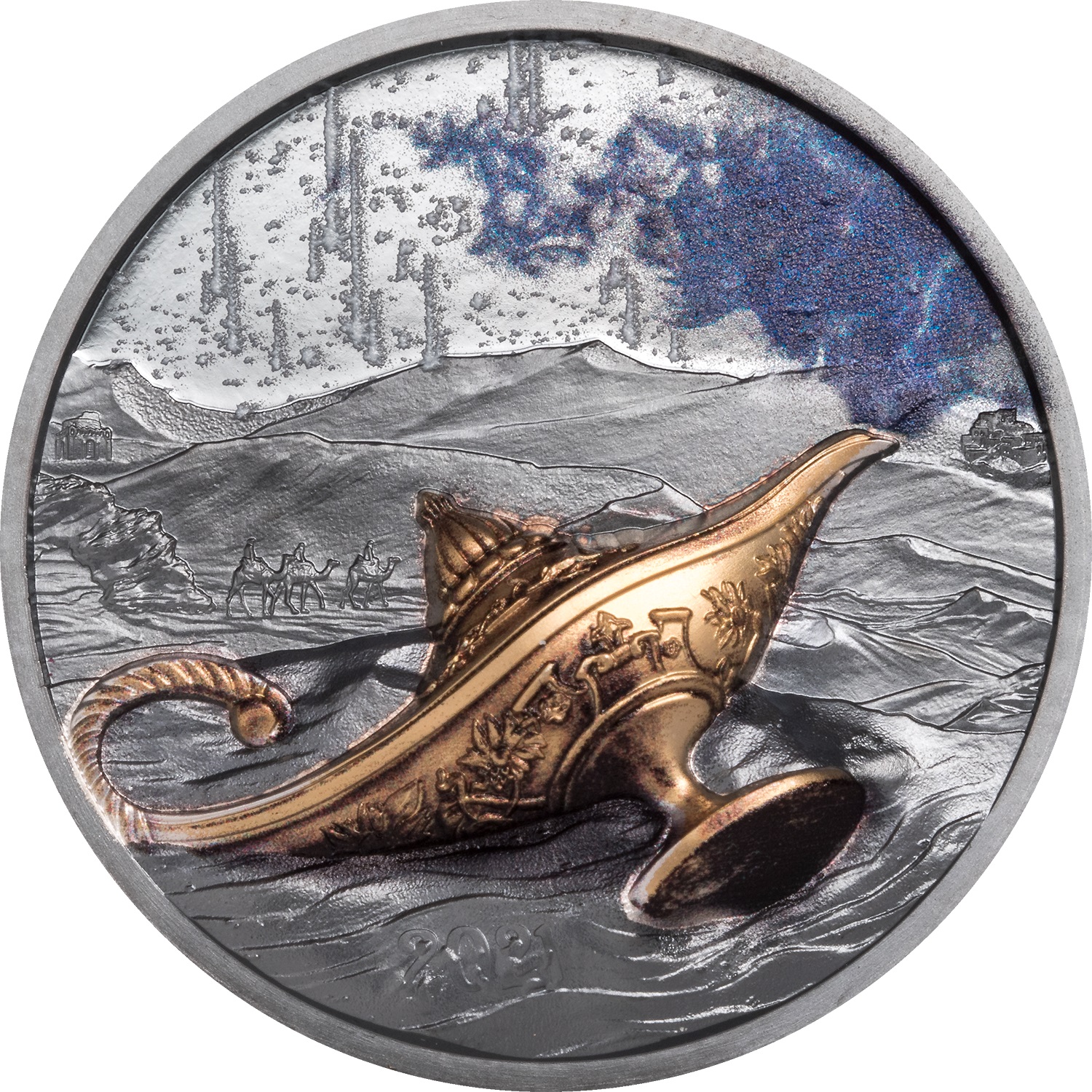 Commissioned by the Coin Invest Trust (CIT) of Liechtenstein, the coins are produced by B.H. Mayer’s Kunstprageanstalt GmbH at their facilities in Munich, on behalf of the treasury of the Republic of Palau. The obverse side depicts this special magic lamp as it has never been seen before on a coin. Utilising a smartminting technique, the lamp can be seen lying upon the sand with the dunes in the background against a canvas of a starry night sky. Note the detail of the three desert travellers and their camels to the left of the lamp. The lamp itself is minted to very high relief and toned with a different colour of metal using a spot-plating process. Additional colour is added to highlight the mystical smoke emanating from the lamp, which would occur before the genie emerges from captivity. The black Proof finish creates an ancient but also modern look which is an impressive contrast to the gilded lamp.

The reverse side depicts the crest of the Republic of Palau, which includes images of a kayak symbolising the migration of Palau’s population three millennia past. In the centre is Neptune and trident with a chest of treasures to his right and a mermaid to his left. Below is the motto RAINBOW’S END. Above the crest is the text REPUBLIC OF PALAU with the denomination of 5$ shown below.

A gold version of the magic lamp is available in a 1/2-gram gold Proof coin that is struck in the lamp’s unique shape. 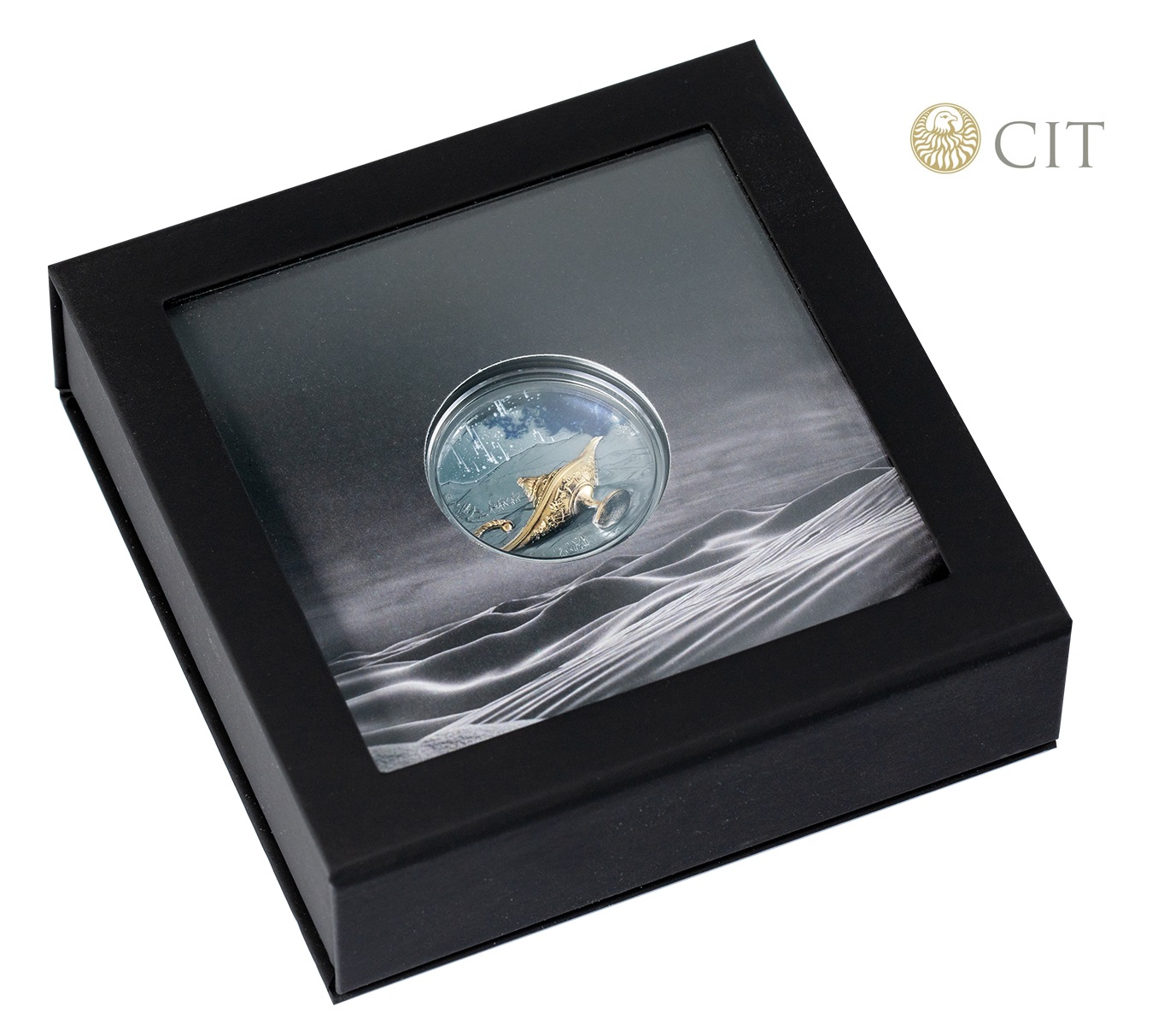 The coins are encapsulated and presented in a custom windowed case, accompanied by a certificate of authenticity. For additional information about these coins and others commissioned by Coin Invest Trust (CIT), please visit their website.