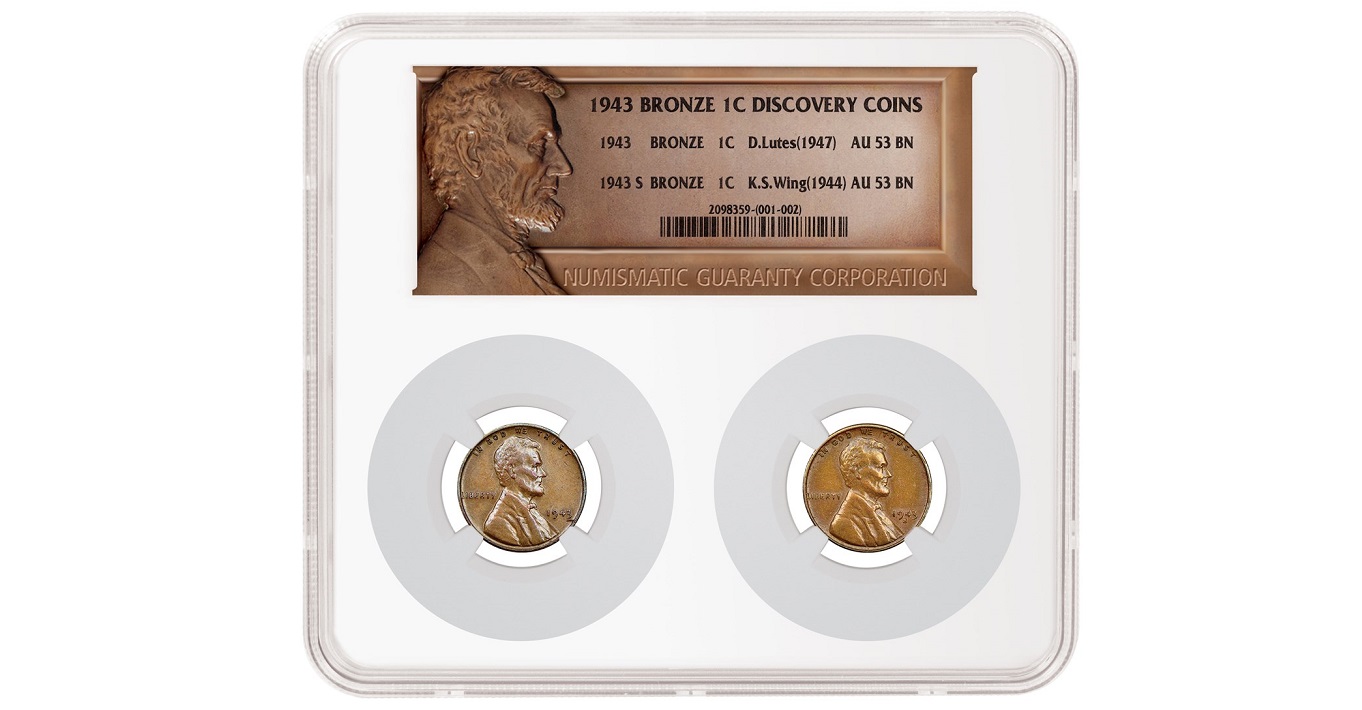 Two of the rarest and most famous U.S. coins have been brought together under a single owner.

The 76-year-old coins look like regular Lincoln cents from the era — bronze with the 16th president on one side, wheat ears on the other. Yet they were not supposed to exist. For years, U.S. Mint officials claimed that they didn’t.

The teenaged boys who found them in the 1940s, one on the West Coast, one on the East, struggled to have them declared genuine and kept them their whole lives. The coins were sold after their deaths for more than $200,000 — each.

What makes such ordinary-looking coins so valuable? As in most things, it’s their rarity. Some 1.1 billion Lincoln cents were minted in 1943. But all of them were supposed to be struck in steel because the copper that normally made up 95% of the one-cent coins was needed to make ammunition during World War II.

Yet rumors quickly began circulating that a very few 1943 Lincoln Cents had been made of bronze blanks left over from the previous year and that they were very valuable if you could find one. One rumor said Ford Motor Co. had offered a new car for one. That rumor proved to be untrue, though it was so widely spread that Ford and the U.S. Mint were hard-put to answer the flood of mailed-in inquiries about it.

The Don Lutes Jr. 1943 Philadelphia bronze Lincoln cent and the Kenneth S. Wing Jr. 1943 San Francisco bronze Lincoln cent, each named for the teenaged boys who found them more than 70 years ago, were both certified as authentic by Numismatic Guaranty Corporation (NGC), a leading third-party authentication and grading service for collectible coins. NGC graded them both AU-53 separately. Now the two coins are displayed together in a single tamper-evident NGC holder.

To the man who brought them together, Concord, Massachusetts, coin dealer Tom Caldwell, the coins’ rarity, well-known stories, and common-man appeal are what make them so attractive.

“These are coins that your neighbor knows about, not just hard-core collectors,” said the owner of Northeast Numismatics, for 40 years.

“People love provenance, and the stories of these two coins are so well known.”

Only around 40 1943 copper–alloy cents are known to exist.

“The 1943 bronze cent is by far the most famous U.S. Mint error,” says Mark Salzberg, NGC chairman and grading finalizer. “Examples are extremely rare and highly coveted by collectors.”

The Wing and Lutes coins both are what’s known among coin collectors as “discovery coins” — the first of their kind ever found and made known. One was minted in San Francisco, as indicated by an “S” mint mark. The other one does not have a mint mark, which indicates it was struck in Philadelphia.

But what of the discoverers? Wing was 14 when he found one in Long Beach, California, in 1944. His parents had been buying him rolls of one-cent coins because he was collecting sets of them.

Lutes was 16 when he found his among change he received from buying lunch at his high school in Pittsfield, Massachusetts.

The young men spent years trying to get the U.S. Mint to acknowledge that the coins were genuine. Wing finally succeeded in having his authenticated by Smithsonian Institution experts in 1957; Lutes’ was declared genuine by well-known numismatist Walter Breen in 1959.

“We’d just sold a ’43 bronze cent of a slightly lower grade, so we had some idea of the market,” he said. “We were not expecting to buy it but were fortunate that we could get it at a reasonable price.”

Then the cent, once owned by Wing, who died in 1996, was offered at auction in August 2019. “We bought it, again pretty reasonably, and put the two together in a single NGC holder,” Caldwell said. He paid $216,000 for the Wing coin.

The stories of how the coins were found were appealing. The sums for which they were sold this year caused them to receive coverage from the news media — even the non-numismatic ones — with headlines like “Coin found in lunch change fetches a pretty penny.”

The sales, particularly of the Lutes coin, were the subject of feature stories done by CNN, the New York Post, the Boston Globe, USA Today, and Newsweek and Fortune magazines, among other news outlets.

Now that the two coins are displayed in the same holder, Caldwell said he plans to display them at a few regional shows, then at the FUN show in Orlando in January and the Long Beach Expo show in California in February.

The pair will be sold eventually, Caldwell said. Now that they are together, he will not split them up.