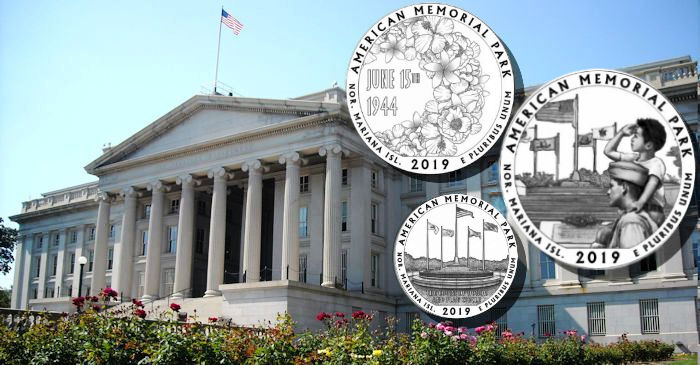 My late-morning flight from Atlanta to the September 19, 2017, Citizens Coinage Advisory Committee meeting in Washington was quick and easy—no delays, no bad weather or turbulence. It’s an hour-and-a-half trip from The Big Peach to our nation’s capital. Convenient travel is one of the advantages of living in Atlanta, home to the busiest airport in the United States. I’m well aware that other CCAC members sometimes have to fly in at the crack of dawn, or take trains that might or might not be delayed.

At Hartsfield-Jackson International Airport I received in change two bright, freshly minted 2017 America the Beautiful quarters—one Ellis Island, and one Frederick Douglass. Their designs illustrate the amount of fine detail that can fit on the small canvas of a quarter dollar. There’s a difference between busyness in a composition and detail in its execution.

The second portfolio of designs we reviewed in our meeting was for American Memorial Park on Saipan, the largest of the Northern Mariana Islands.

This park honors the American and Marianas people who gave their lives during the Marianas Campaign of World War II. There are 5,204 names inscribed on a memorial that was dedicated during the 50th anniversary of the Invasion of Saipan. 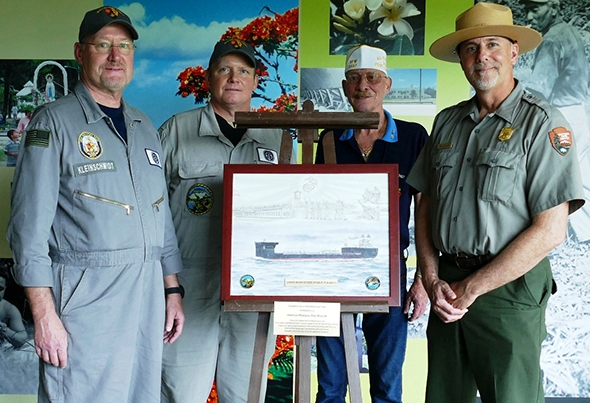 Acting Superintendent Paul Scolari of American Memorial Park (right) joined us by phone for our CCAC meeting—even though it was 1:00 in the morning on Guam! (Photo by U.S. Navy First Assistant Engineer Mike Long.)

We were joined by Paul Scolari, acting superintendent of the park, who was calling in from Guam (where it was 1:00 in the morning). Mr. Scolari described American Memorial Park: It’s an urban setting of about 130 acres, a commemorative park and a memorial landscape that was established coincident with the creation of the Commonwealth of the Northern Mariana Islands. People use it as a living park, for recreation, Scolari said, and it’s an important part of the community in that sense. But its main focal point is the Memorial Court of Honor and Flag Circle, and its intent is to honor the war dead.

As I reviewed the design portfolio, I kept in mind the definition of a memorial: a monument or structure established to remind people of a person or event; especially to remember someone who has died; from the Latin word for memory. Although the physical beauty of American Memorial Park is an appealing attraction, I remember the words of Superintendent Jim Richardson in our March 2017 CCAC meeting: “World War II is the critical reason for the park’s being.” 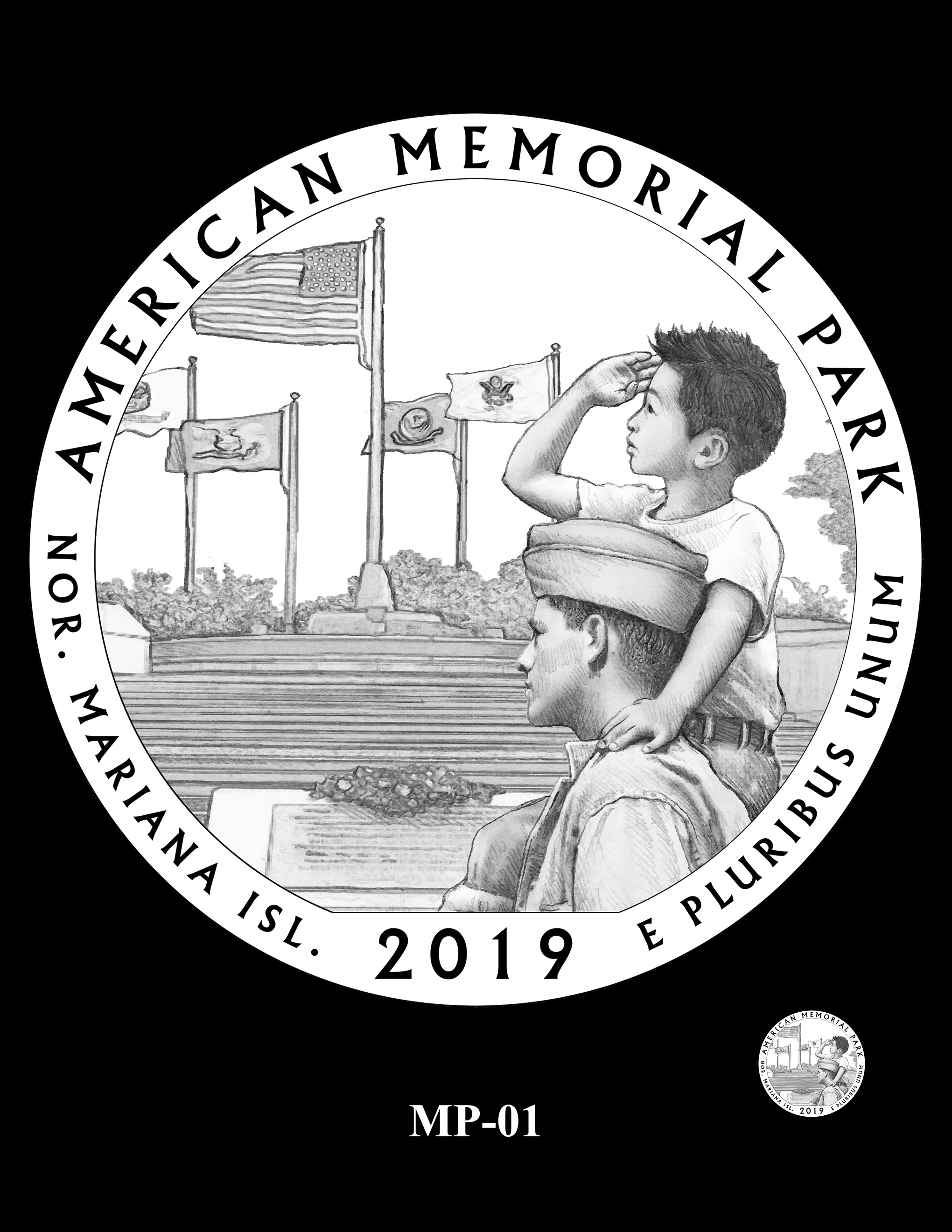 To me, the hands-down winning design in this portfolio is MP-01. It shows a boy on the shoulder of a serviceman, saluting the Court of Honor and Flag Circle. The boy is specifically Chamorro—one of the indigenous people of the Mariana Islands. (The soldier could be Chamorro, or he could be continental American.) To me, it’s important to show the Chamorro culture and ethnicity—not only for the significance of local participation in the Marianas Campaign, but for the sake of young Asian Americans, so they can see themselves on a circulating U.S. coin. (There are about 20 million Asian Americans living in the United States and its territories.) The “brand promise” of the United States Mint is “Connecting America Through Coins,” and this design offers a unique opportunity to do just that without weakening its connection to the memorial park.

Another strong aspect of MP-01 is the boy’s salute. This physical act is a universal symbol of respect. A salute is immediately recognizable whether you’re a civilian or military. It transcends language. To me, this quietly but eloquently tells the story and the purpose of American Memorial Park.

I was pleased that Acting Superintendent Scolari agreed with my analysis of the coin design, and he indicated that MP-01 was also the preferred design of the National Park Service. 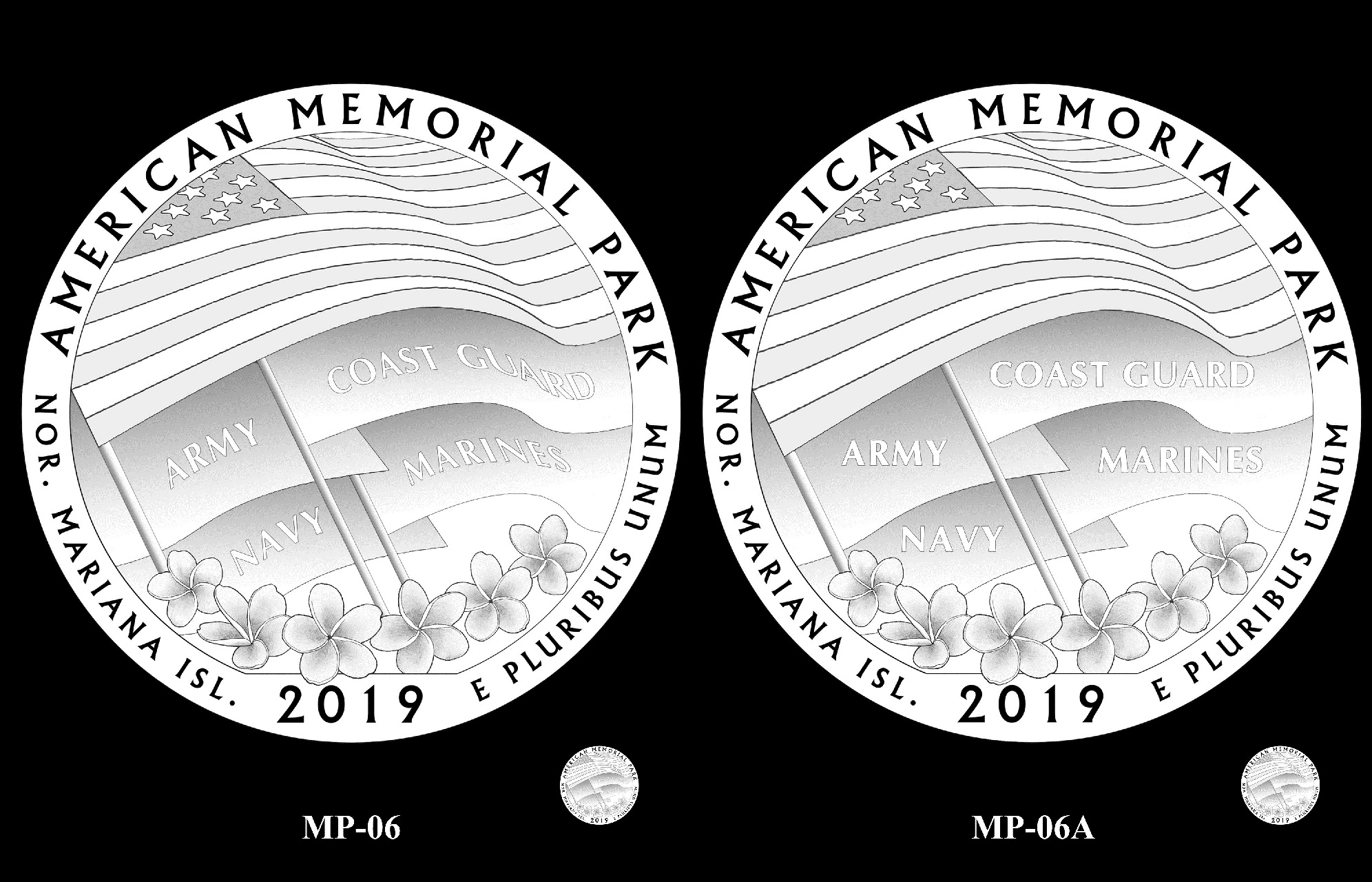 Other CCAC members spoke to the appeal of other designs. Acting Chairman Donald Scarinci found MP-06 and 06A to be “the most aesthetically pleasing.” 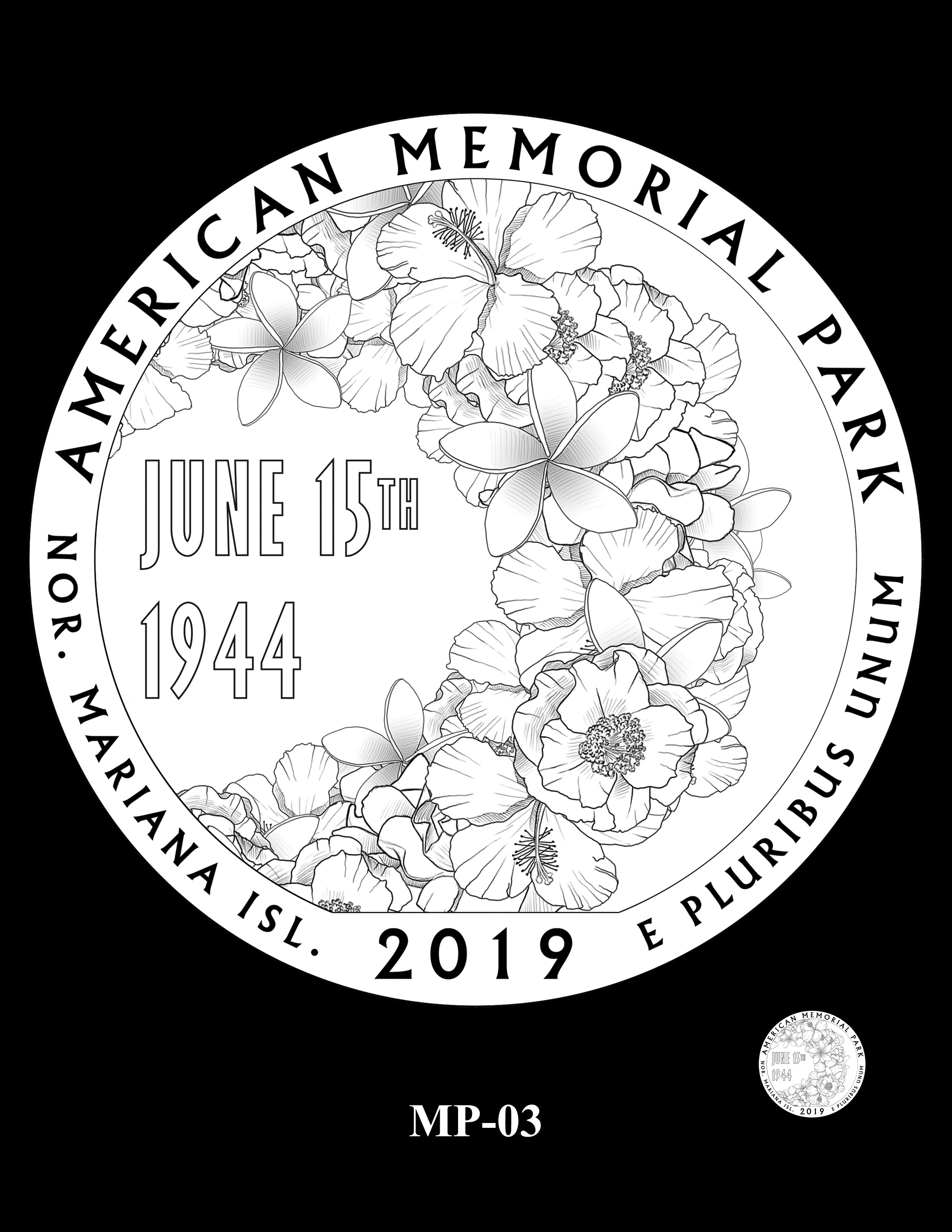 Former chair Mary Lannin referred to the delicacy of the flowers on MP-03, calling it a “beautiful design that should strike well.” She also was attracted to MP-06 and 06A, especially with the curvature of the wavy typography on 06. Ronald Harrigal, the Mint’s acting quality manager, who was present at the meeting, confirmed that the wavy effect is technically achievable, with the Mint’s artists able to craft the lettering to give the illusion of it being on a flag, even though they’re constrained by the small surface area of a quarter dollar. 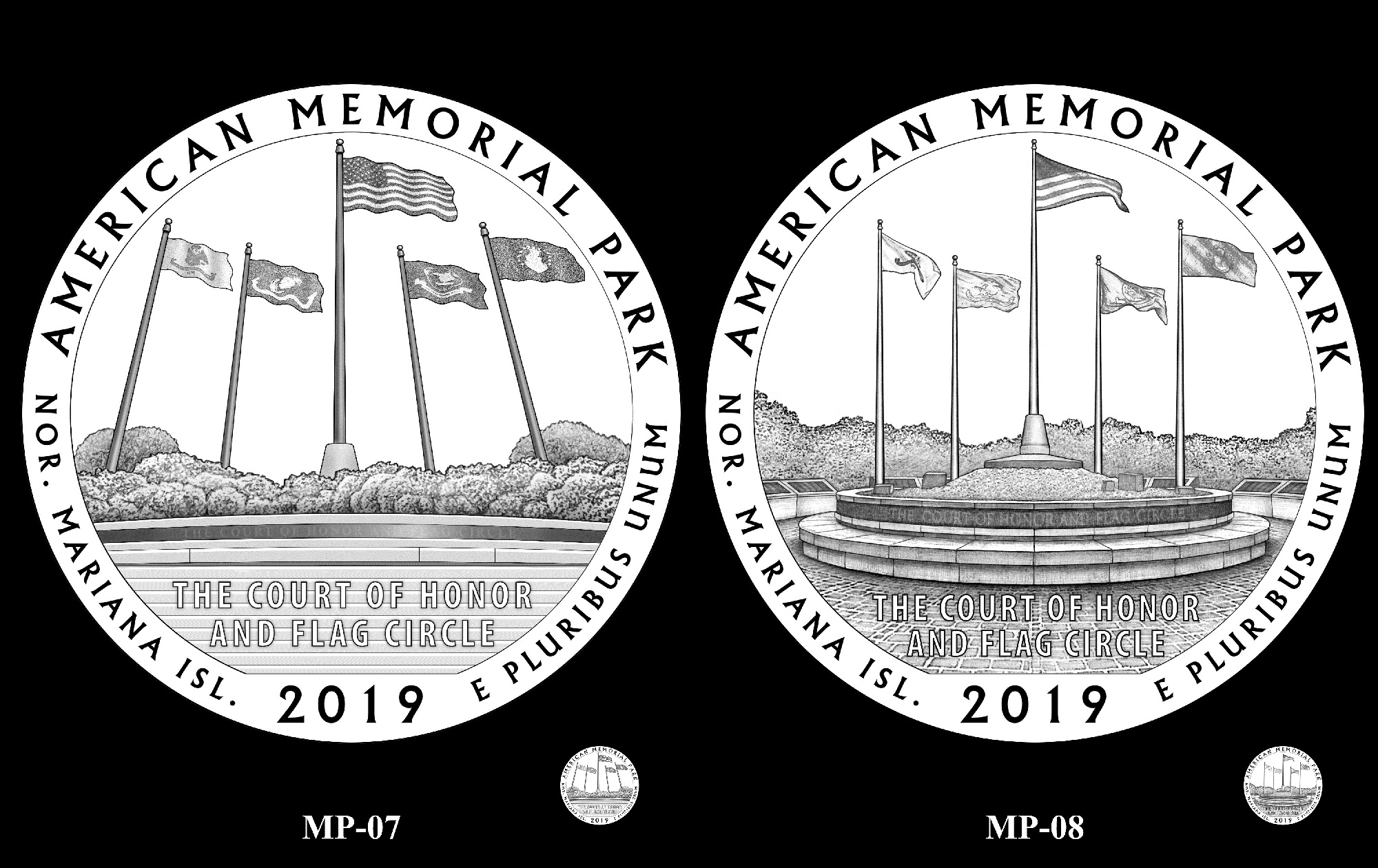 Member Tom Uram (who was recently elected to the Board of Governors of the American Numismatic Association) called attention to the designs that feature the words THE COURT OF HONOR AND FLAG CIRCLE, including MP-07 and 08.

Member Heidi Wastweet, a sculptural artist based in California, called MP-01 “a lovely drawing” and noted its appeal, but she opined that it wouldn’t work well on a quarter-sized coin. The design would be too shallow, she said, and the layering would be a challenge for whomever is assigned its sculpt. MP-03 she felt would read well as a quarter dollar, with emotion conveyed in its combination of simplicity and detail. She found MP-06 and 06A to be too crowded, without enough negative space; and in MP-07 she found the perspective of the flags interesting (as did I and several other committee members). MP-08 she described as attractive, with symmetry, “though perhaps unimaginative.”

Member Erik Jansen, a scientist and businessman from Washington State and a lifelong coin collector, called the designs all utilitarian. He also gave a reminder to the artists who submit potential coin designs: “Grayscale is different from coin engraving.” He offered MP-06 as an example, noting that the toning in the drawing would not translate into sculpted metal.

Member Mike Moran, a natural-resources industrialist by trade and also an award-winning numismatic author, said he was “troubled” by MP-03, noting that it doesn’t capture the memorial park’s Court of Honor. I agree this is a detraction for the design, even though I find the artist’s work beautiful and I think it would make an attractive coin or medal. To me the flowers are too generic of a memorial symbol; they could represent any grieving commemoration, public or private, and don’t speak specifically to American Memorial Park. MP-06 and 06A, Moran said, wouldn’t coin well, and he said 07 and 08 are “okay”—not very creative, “but how many ways can you show a circle of flags?” 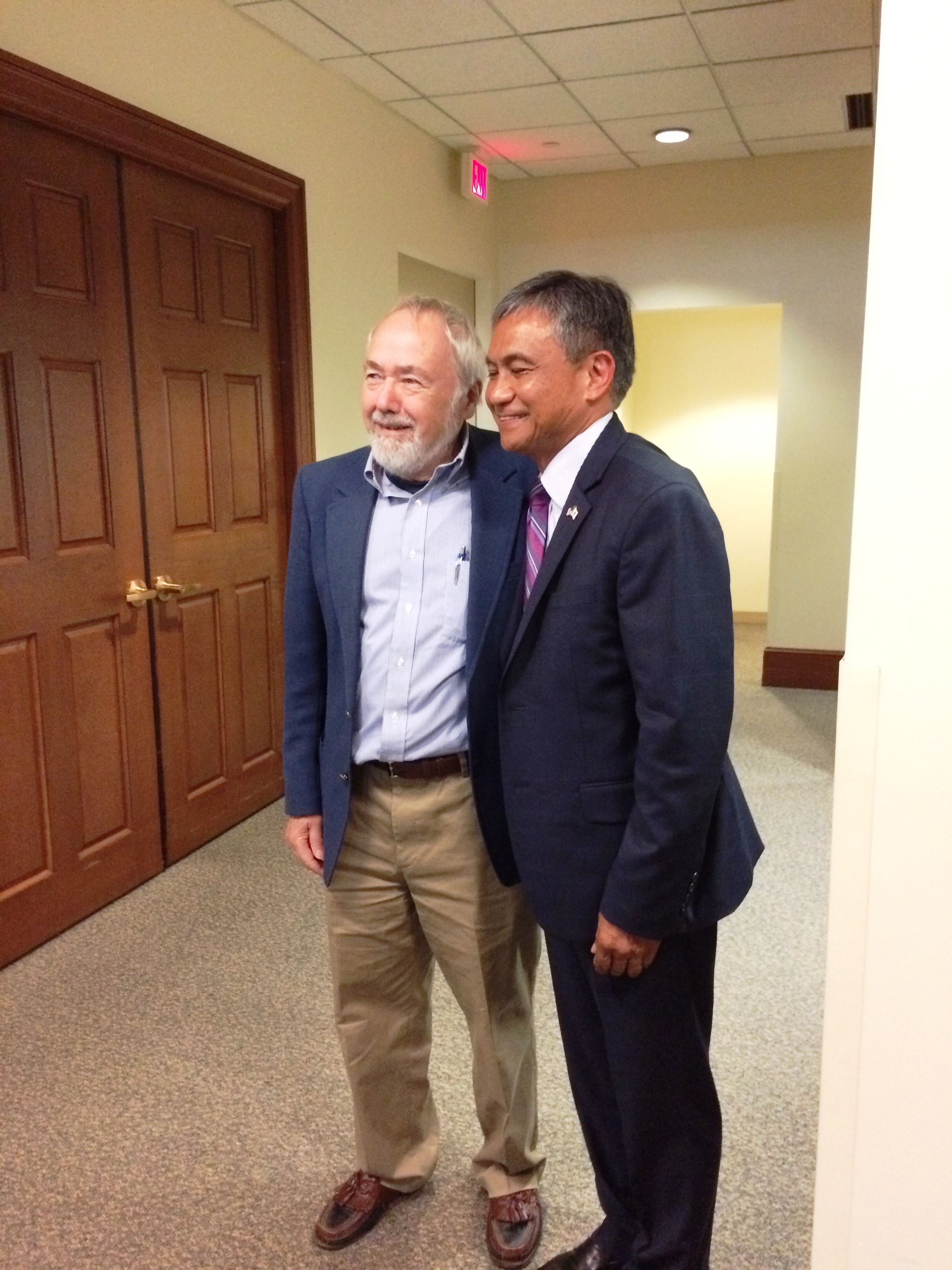 Member Dr. Herman Viola, a curator emeritus at the Smithsonian Institution, called this coin “a tough design,” but gave his support to MP-08.

Member Jeanne Stevens-Sollman, a Pennsylvania-based sculptor and president of the American Medallic Sculpture Association, commented on the difficulty of this portfolio. The flags in MP-07 and 08, scaled down to coin size, would be too small, she said. MP-06 was her preference; she praised its quality, but also wondered aloud if it would strike well. 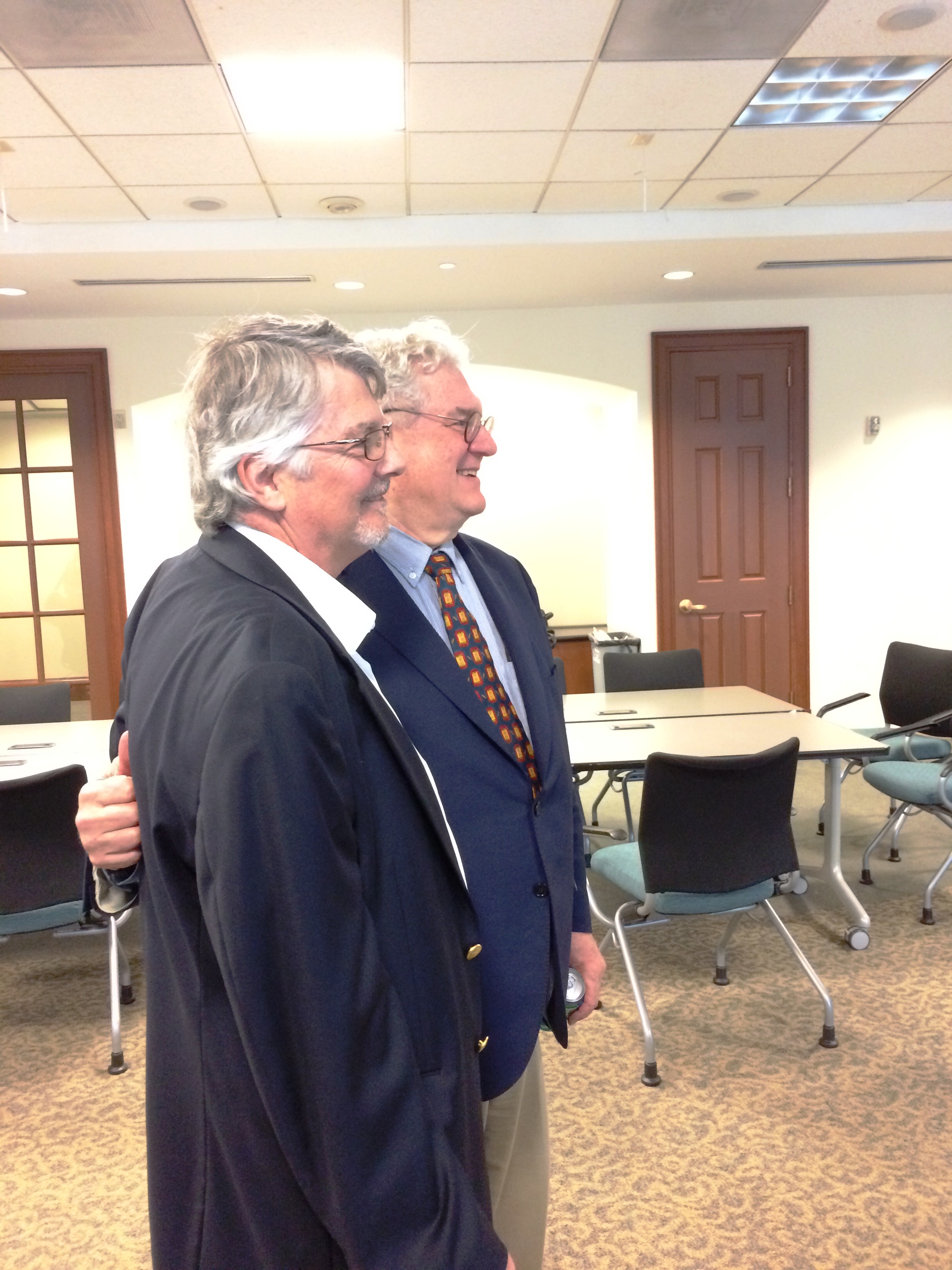 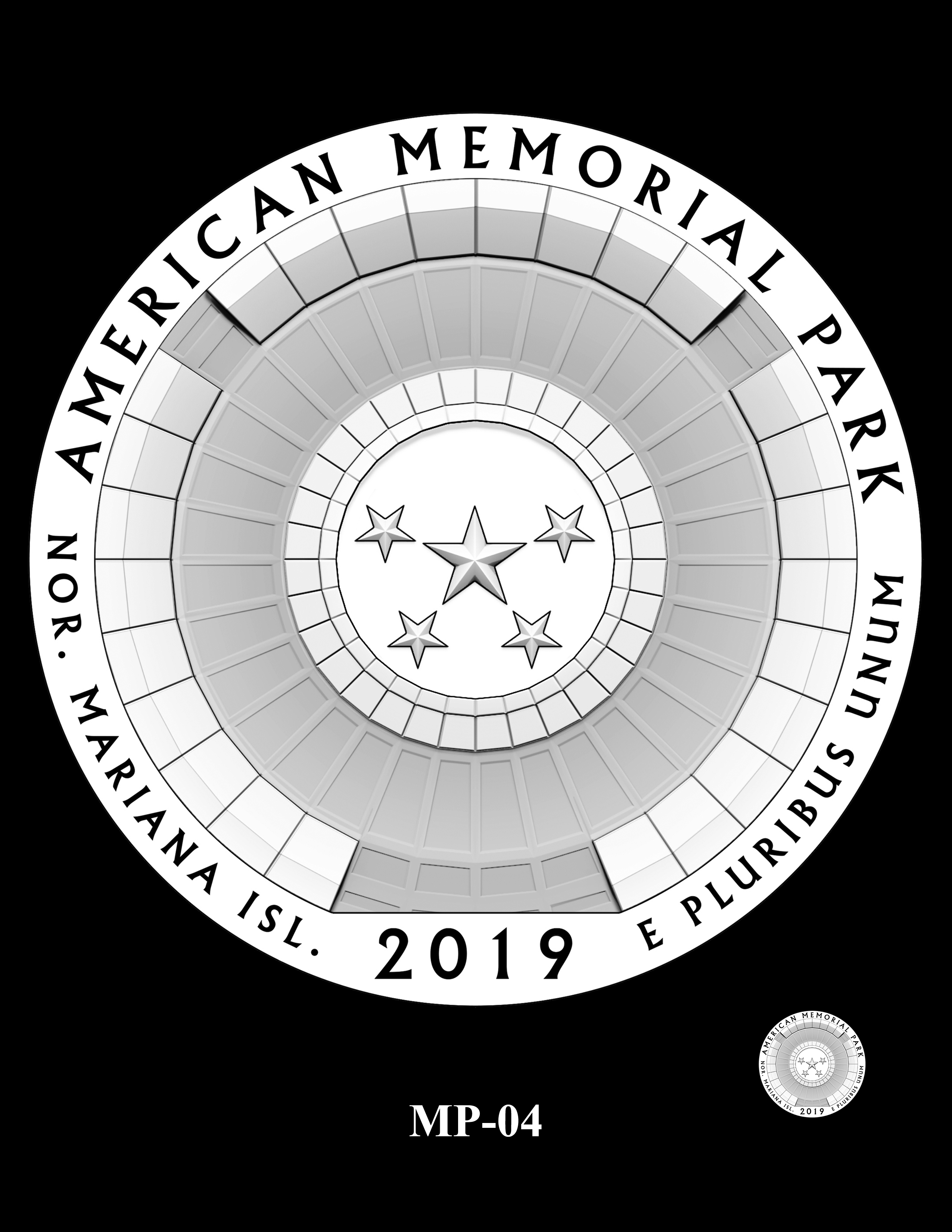 He brought attention to MP-04: “It does show the park, though in a very stylized manner.” His favorite among the designs was MP-03, and he noted the significance of the date, June 15th, 1944, observing that the coin’s year of issue, 2019, makes it a 75-year commemorative of the arrival of American troops on Saipan.

Ron Harrigal discussed some of the technical challenges of depicting long, straight lines, such as flag poles, on coins, especially in Proof format. He said the Mint’s artists and technicians would have to make multiple versions of the tooling to get it right. We also discussed with Ron and with April Stafford, director of the Mint’s Office of Design Management, the feasibility of changing the peripheral legend of NOR. MARIANA ISL. to N. MARIANA ISLANDS. They assured us that the possibilities had already been discussed with the National Park Service, and the wording and lettering had been experimented with, and the current legend was what worked.

Our Vote for American Memorial Park, and Our Recommendation to the Treasury

The Citizens Coinage Advisory Committee was established by Congress to advise the Secretary of the Treasury on theme and design proposals relating to circulating coinage, bullion coinage, Congressional Gold Medals, and national and other medals.

The CCAC doesn’t “decide what goes on coins.” We give our studied, reasoned advice to the Treasury secretary, and he makes the final decisions.

Part of our process in coming to a recommendation for any given coin is to take a vote after we discuss and analyze each design proposal. In our voting for the American Memorial Park coin, each design candidate could earn up to 30 points. (10 members were present, and each could assign 1, 2, or 3 points to each design.) This is how our voting went: 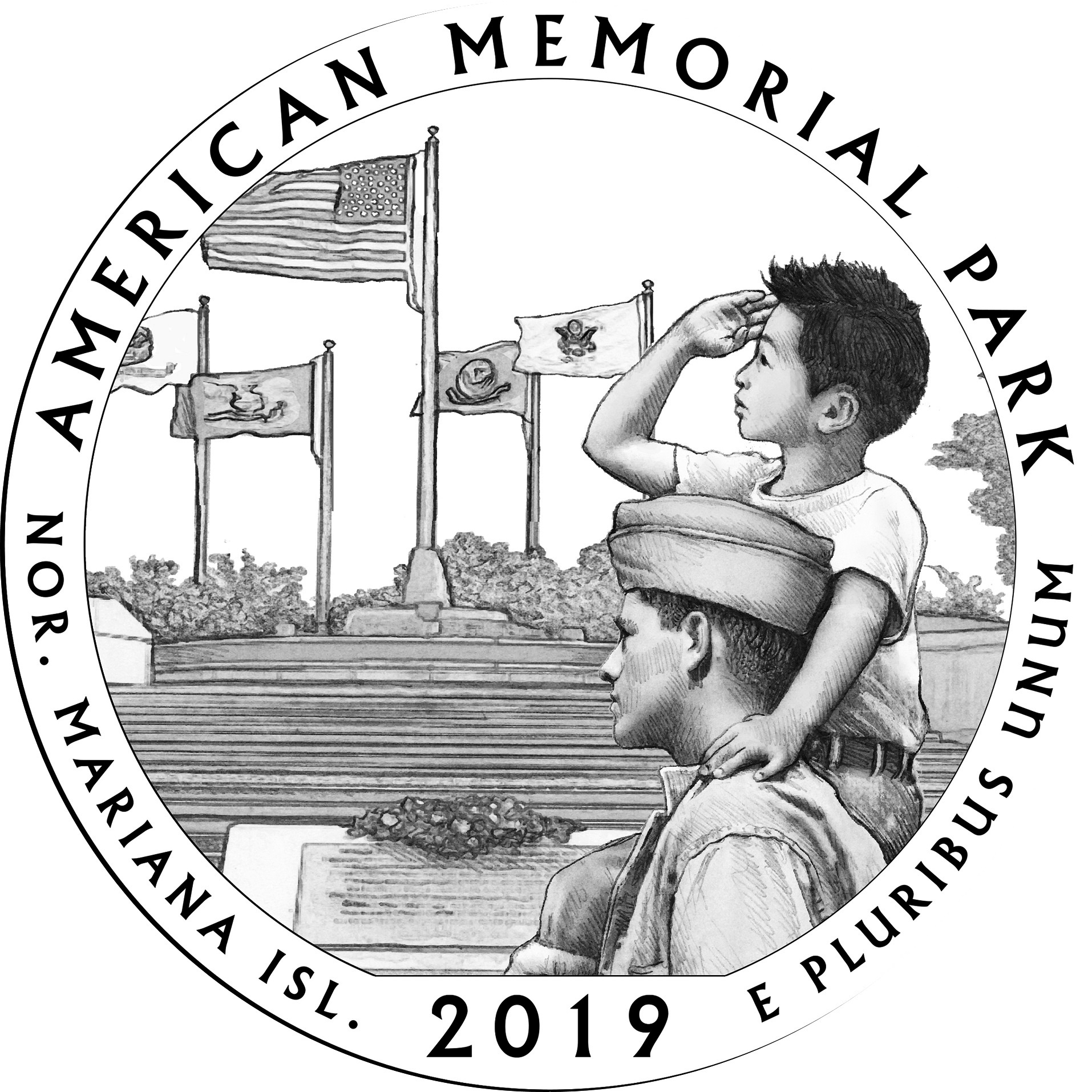 With several committee members noting that MP-01 would benefit from slight modifications to fit a small coin diameter, we further advised the Mint’s artist to enlarge the figures, push the flags more to the background, and/or otherwise provide variations of the design for our review and approval. We will then make our final endorsement to the Secretary of the Treasury.

Next: The War in the Pacific National Historical Park (Guam) quarter.