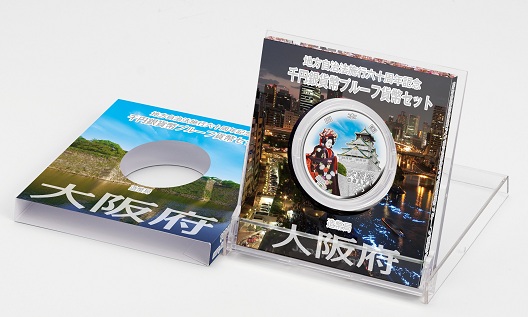 The Mint of Japan has unveiled (2nd October) its latest design in a series bearing motifs from every prefecture in Japan. The new coin features Osaka Prefecture, a large port city and commercial center on the Japanese island of Honshu, known for its modern architecture, as well as its historical connection to ancient Japan.

In A.D. 645, Osaka, which means “large hill or slope,” was the stage for a great historical event, the Taika-no-kaishin. Emperor Kotoku (596 – 654) left Asuka and moved his court to Naniwa Nagara Toyosaki-no-miya—now modern-day Osaka—in order to oppose domination of the Sui and Tang Empires. He quickly consolidated power and built the first phase of his palace of Naniwa-no-miya. Though the capital eventually relocated to Nara, the second phase palace of Naniwa-no-miya came to serve as a sub-capital and continued to play a role as a gateway for international exchange. 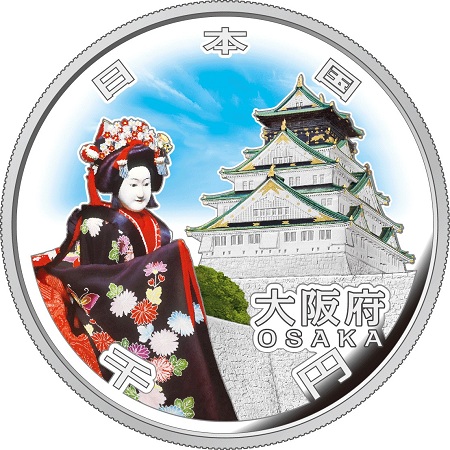 From the beginning of the 17th century, Osaka became an important base for transportation; goods from all over Japan were gathered and shipped there. Osaka was connected with international trading as well, and flourished as the nation’s largest economic city. Osaka also developed the commodity price the rice in the Dojima Market, recognized thereafter as the standard price for the whole of Japan.

Osaka was officially given city status on April 1, 1889. Today, the modern metropolis of Osaka is home to more than 2.5 million inhabitants—it is Japan’s third largest city by population and its second most important city in terms of economic output. Osaka has also become nationally and internationally known as the nation’s kitchen because of its exceptional Japanese cuisine.

The coin’s obverse design includes a depiction of Osaka Castle and Bunraku. Located in central Osaka Prefecture, this symbol of Osaka welcomes over 1.5 million visitors yearly. One of Japan’s three most famous castles, the donjon, was reconstructed in 1931 and was designated as a National Registered Tangible Cultural Property in 1997. The Bunraku Puppets, originally known as ningyo joruri, are included in color on the obverse as one of Japan’s best-known traditional arts. Bunraku puppet theater is an art form that integrates three elements: ta-yu (narration), shami-sen (a three-stringed instrument), and ning-yo (puppets). This art form was registered as a UNESCO Intangible Cultural Heritage in 2008. 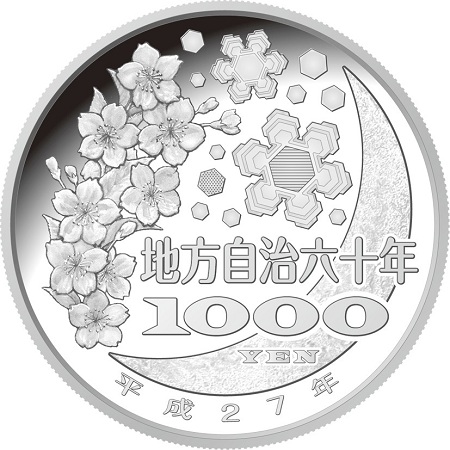 The coin’s reverse is standard for the entire series. It includes latent image technology that is applied to the center of the largest snow crystal to make the numbers “47,” representing the number of prefectures in Japan, and “60,” representing the 60th Anniversary of Enforcement of the Local Autonomy Law.

This coin is the 43rd issue in the series and is packaged in a CD-style case with a colorful outer sleeve. It will become available to the public at the end of November and will be dispatched from the beginning of December. A 500 yen bi-metallic circulation coin with the same design (sans color) will be issued at the same time as the silver coin. The next coin in the Prefecture Series will be dedicated to Nagasaki.

For more information on this and other coins available from the Mint of Japan, please visit their Web site. For international distributors of Mint of Japan coins, please the Mint’s distributor page.