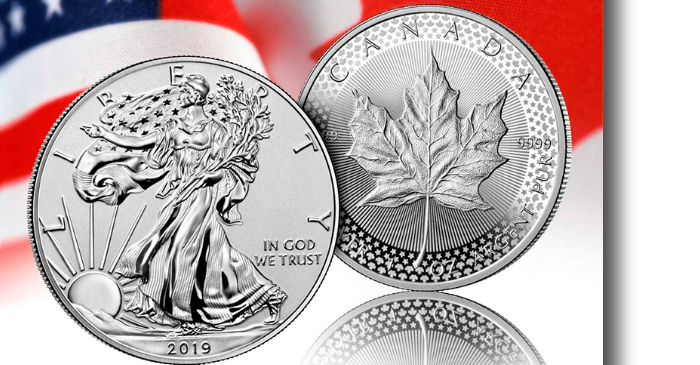 In mid-June, the U.S. Mint added the 2019 Pride of Two Nations Set to its product schedule, including details about the two-coin set to be released on July 3. Designed to celebrate U.S.-Canadian friendship and the intertwined history of the two North American neighbors, it includes new collector versions of an American Silver Eagle and a Canadian Silver Maple Leaf — each weighing in at one ounce of silver, but with a fineness of .999 and .9999, respectively.

In addition to being the first set issued in conjunction with the Royal Canadian Mint, and only the second collaborative effort between the U.S. Mint and a foreign mint after the recent U.S.-Royal Australian Mint Apollo 11 50th Anniversary Set, the two coins will feature finishes never used previously on these two major icons of modern coinage. 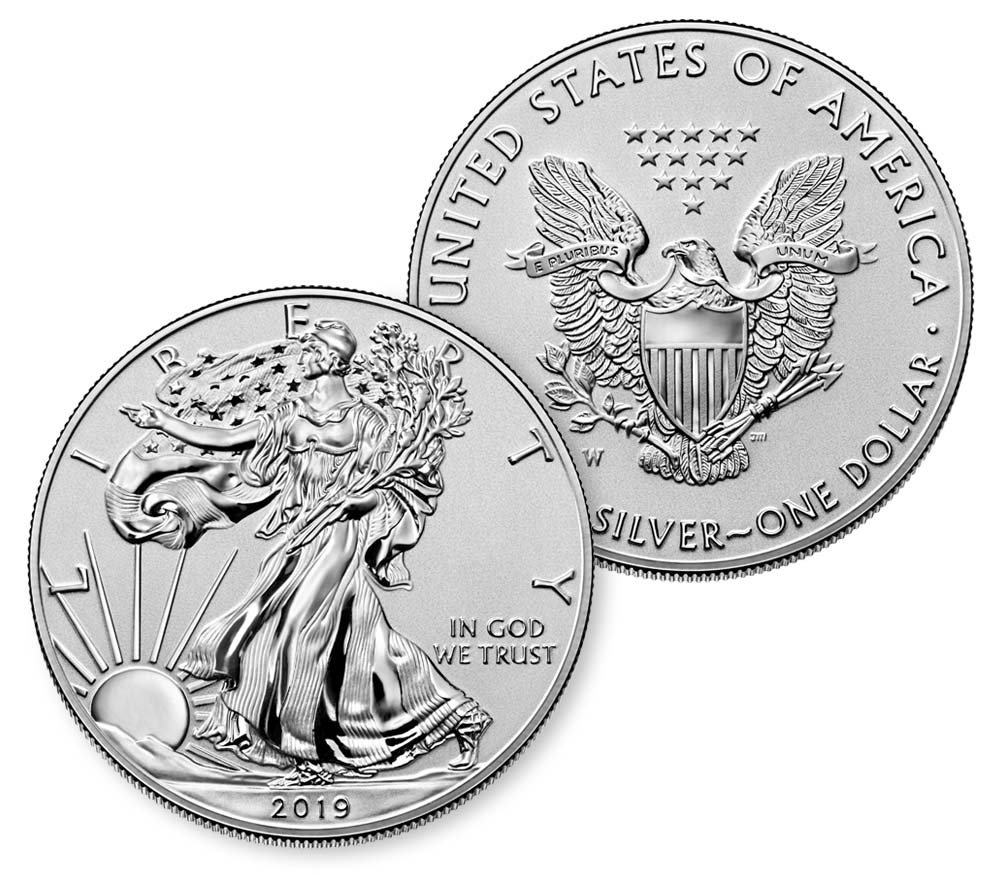 The Silver Eagle will feature an enhanced Reverse Proof finish, which the technical staff of the U.S. Mint explained this way:

The field is frosted like our signature Reverse Proof product.  The artwork is selectively frosted and polished at different levels to highlight various design elements.

The Mint plans to have a limited number of sets for sale in mid-August during the ANA World Fair of Money if any are still available at that time. 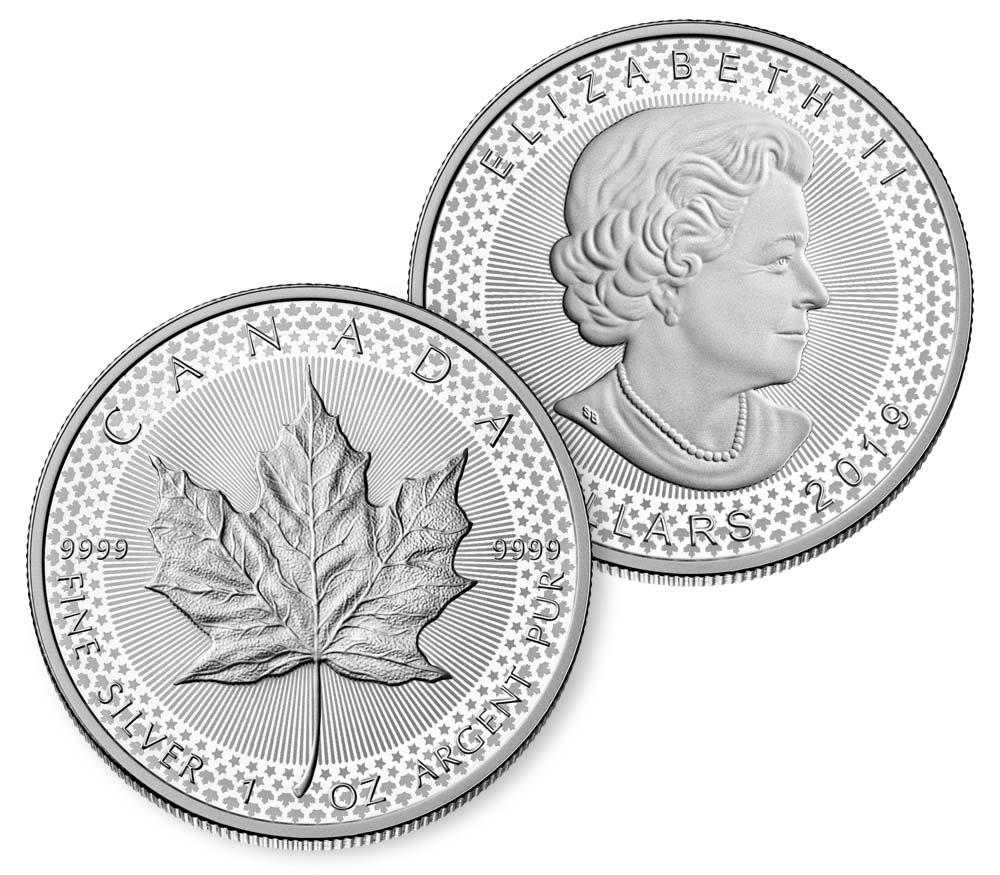 The $5 Maple Leaf coin, which in its bullion version is the world’s second-bestselling silver coin after the Silver Eagle, will feature a modified Proof finish, which Alex Reeves of the Royal Canadian Mint described this way:

The textbook definition of a Proof finish consists of a frosted central motif, with frosted inscriptions over a mirror field. This is the way we strike our annual Proof silver dollar for example. In the Pride of Two Nations Limited Edition Two-Coin Set, our inscriptions have the same natural shine as the field instead of a frosted appearance, creating a coin with a modified Proof finish. 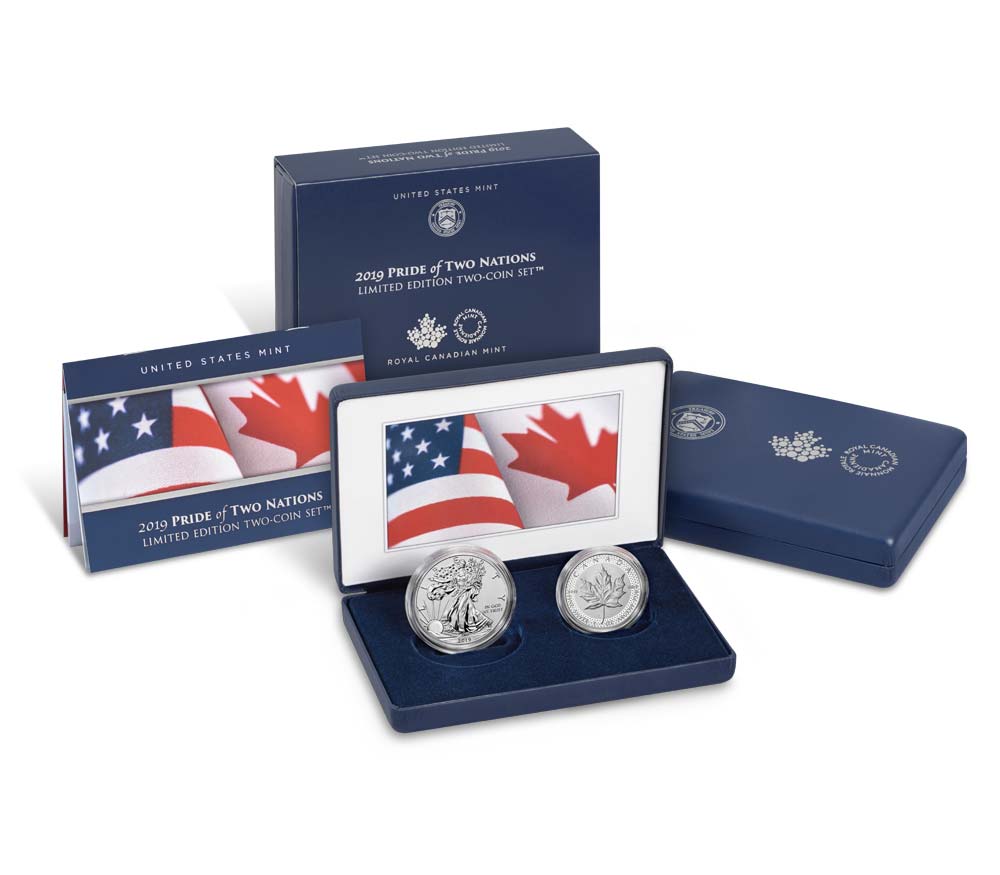 In addition, the $1 eagle has a reeded edge, is struck at the West Point Mint, and carries a “W” mint mark, while the Maple Leaf has a serrated edge, is struck at the Ottawa Mint, and does not carry a mint mark. The set packages the two coins together in a blue clamshell case (for those sold by the U.S. Mint and a black case for those sold by the RCM) with the logos of both mints on the outside and U.S. and Canadian flags inside and the certificate of authenticity will for the first time be bilingual in English and French and features the dual flags. 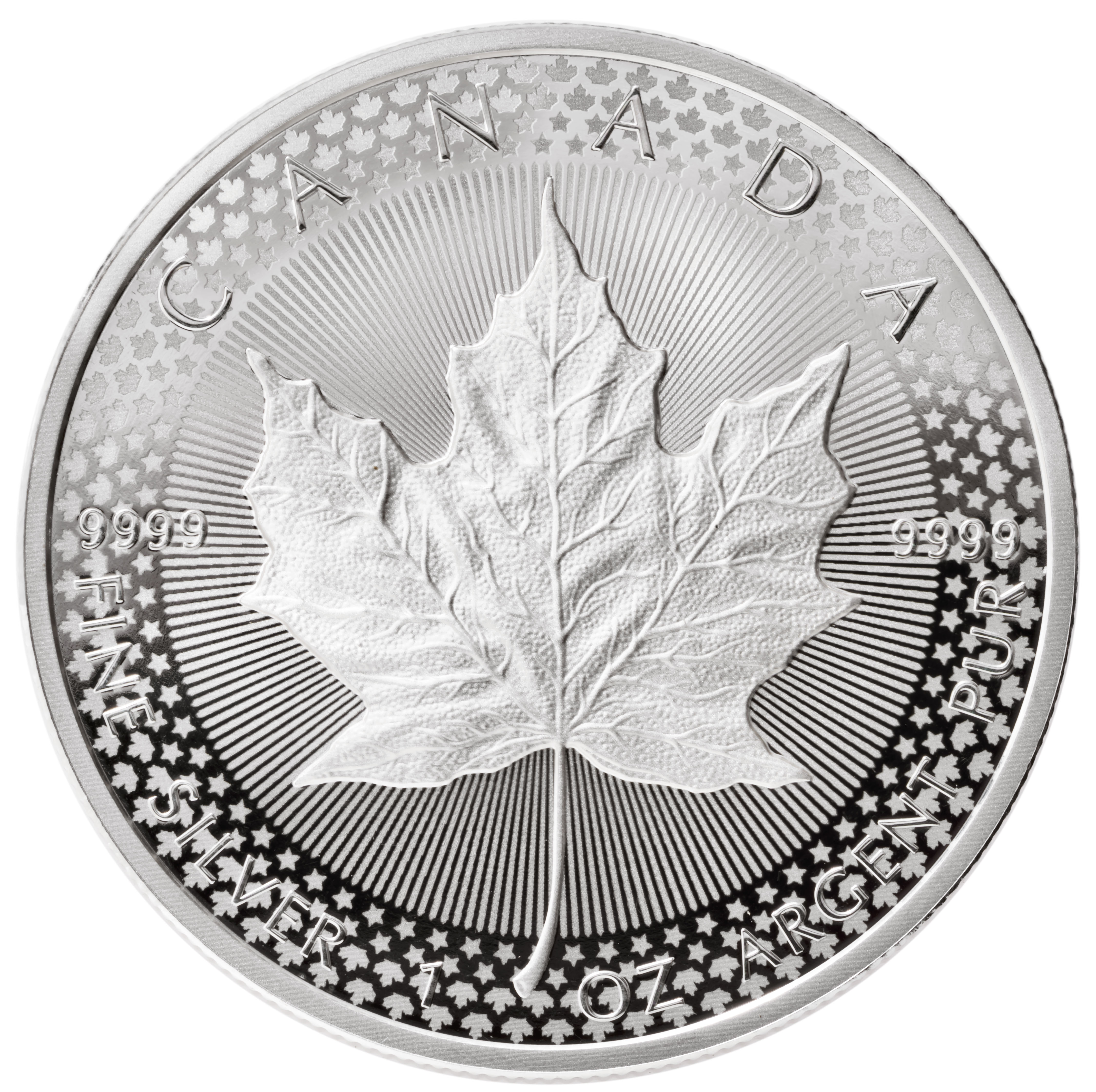 Also, the design by Walter Ott of a maple leaf on the RCM coin is the same one used since the silver bullion coin debuted in 1988 (and since 1979 on the gold maple) with a background of radial lines added, but the perimeter design of small stars and maple leaves is new.

A June 25 press release from the RCM notes: “The maple leaf and eagle are proud symbols of our neighboring nations, which have grown and prospered together for more than 150 years,” said Marie Lemay, president and CEO of the Royal Canadian Mint. “We are proud that these same emblems, found on our famous Silver Maple Leaf and Silver Eagle bullion coins, could be brought together in an inspiring new coin set that celebrates the special bond between Canada and the United States.”

As for the timing of the release, it comes at a perfect moment to celebrate the history of both countries — a day before the July 4 American Independence celebration and just after July 1, which is Canada Day, previously known as “Dominion Day” — the day in 1867 when Canada, Nova Scotia, and New Brunswick united to become a dominion within the British Empire.

In addition to the unique finishes of the coins, the other aspect that has drawn the most attention from collectors so far is the mintage of the coins — a topic about which there exists some confusion. The listing for the set on the U.S. Mint website states that both the mintage and product limit is 100,000. However, the RCM will be offering another 10,000 sets starting also on July 3, which means the overall mintage for both coins will be 110,000, which was confirmed by Michael White, the U.S. Mint’s spokesman on June 24. There is also a household order limit at the U.S. Mint of five sets. 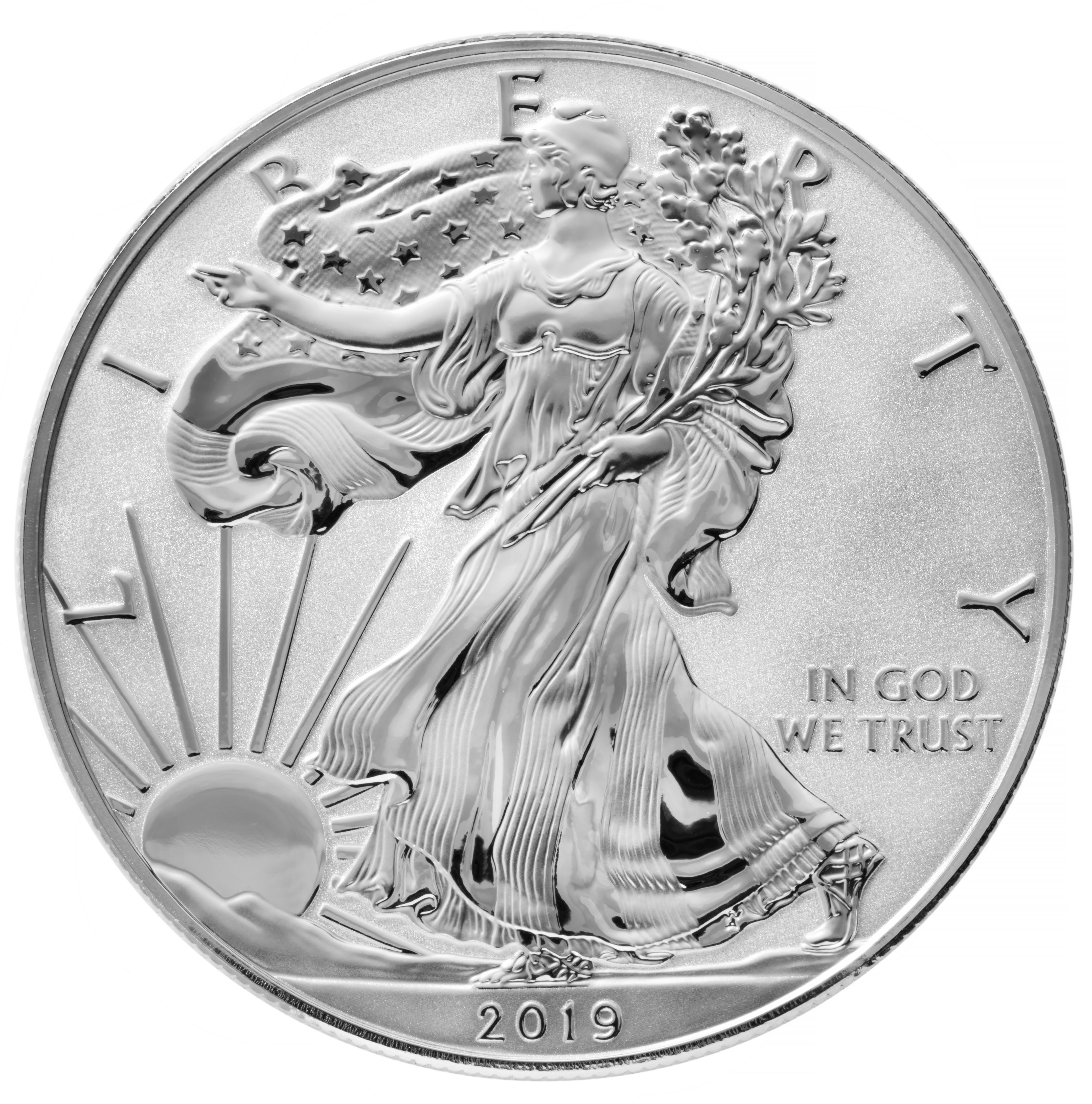 This is a key issue, especially for Silver Eagle collectors, because the 2019-W enhanced Reverse Proof eagle will be one of the lowest-mintage issues in the most widely collected modern U.S. coin series. After the 1995-W Proof and the 2008-W with Reverse of 2007 burnished Uncirculated coin, the next lowest eagles are two coins from the 2011 25th anniversary set — the 2011-P Reverse Proof and the 2011-S burnished coin, which both have mintages of 99,882 coins. After that, the current next lowest is the 2017-S Proof at 123,799.

On the one hand, with a mintage of 110,000, the enhanced Reverse Proof will be the fifth-lowest mintage coins of the series. Since millions of people collect the coin, which is required for a complete set, demand over time should considerably exceed supply. On the other hand, many collectors are less enthusiastic about a new eagle with a new finish than they were back in 2013 when the last special eagle set was released. However, that set was sold to demand and its mintage was much higher at 281,310. It also remains to be seen whether a future eagle might have a lower mintage.

Moreover, there is little doubt collectors would have preferred a lower maximum mintage below 100,000, but anything that low would likely lead to a massive frenzy, instant sellout, and widespread criticism from those who were unable to order.

Coin forum posters are divided at the moment between those who think the set is priced too high and seem non-plussed about the new finish (thought their views could change once they see the coins or at least good photographs of them) and those who are excited about the set, especially the new eagle. However, even some of those interested in the set find the $139.95 price tag high, while others point out it is in line with previous special eagle sets. The 2013-W West Point set was also priced at $139.95 but included two silver eagles and spot silver was considerably higher at the time. 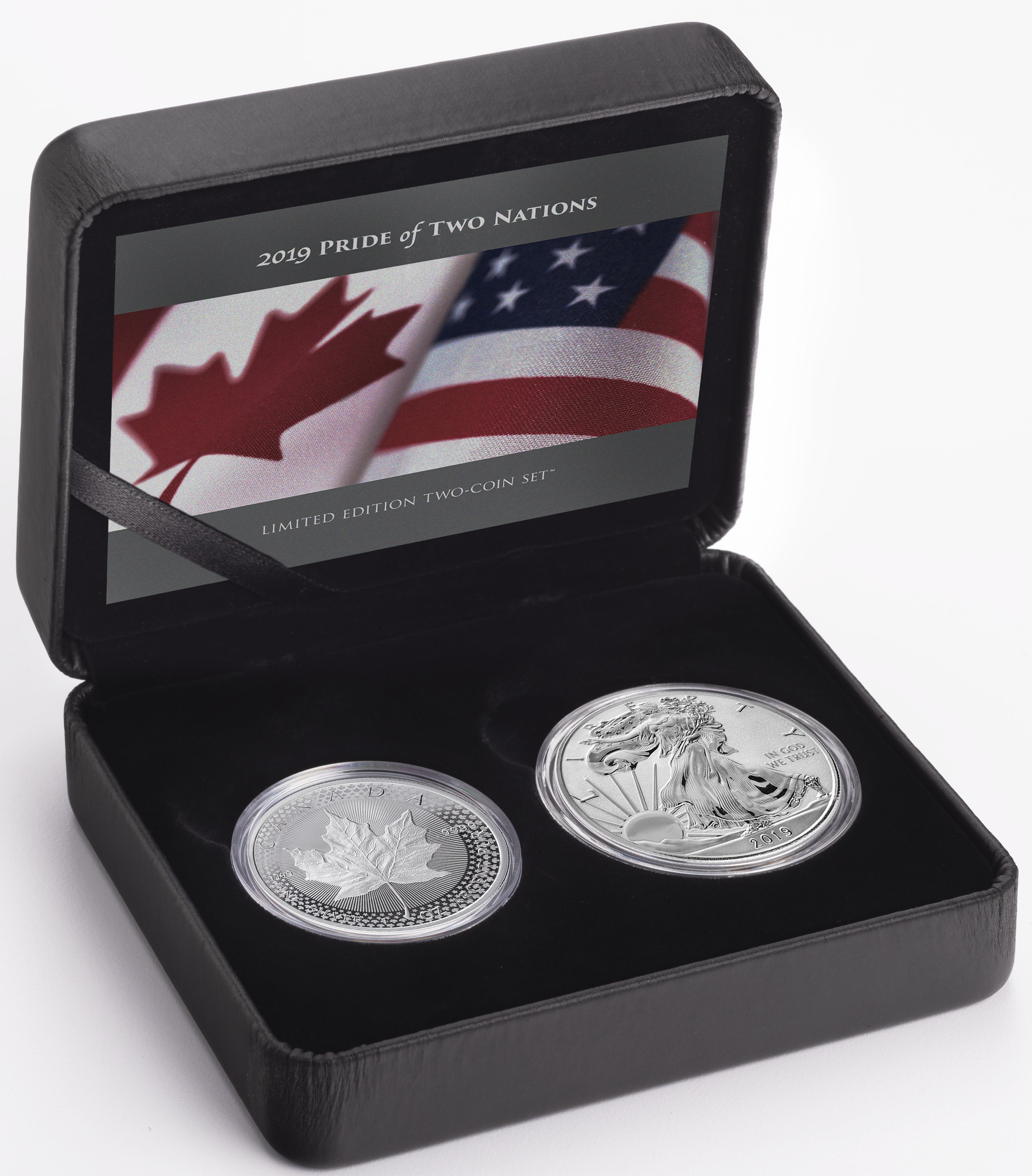 Some collectors say they are tired of seeing special finishes added to the iconic coin as opposed to more significant change such as striking it in high relief or even changing the design, which was considered several years ago for the reverse. Consider this recent comment in a forum about the new set:

There must have been a reason I stopped messing with Silver Eagles. Oh, now I remember — it’s not about collecting anymore. Too many special finish varieties, too many special issues.

When speaking at a dinner in March for the Pennsylvania Numismatic Association the night before the start of the 2019 ANA convention held in Pittsburgh, U.S. Mint Director David J. Ryder said he was exploring a possible change to the design of the Silver Eagle, which would require the approval of Treasury Secretary Steven Mnuchin.

It is worth noting that while it might seem like there are endless varieties of eagles, in reality, there are not that many in a series which now includes 90 different coins but only a handful with special finishes. In addition to the bullion, burnished and Proof coins, there are three Reverse Proofs and one enhanced Uncirculated coin as of now. The burnished Uncirculated coins issued since 2006 are struck on burnished planchets and carry a “W” mint mark. They have a more matte and uniform appearance than bullion coins that have a more lustrous appearance.

The key issue about the new enhanced Reverse Proof finish is whether it is distinctive enough to really matter to collectors. Though it appears only enhanced on the obverse side in the images on the Mint’s website, Mint officials said they were told both sides are enhanced.

In addition, while coin forum posters are not necessarily representative of collectors except perhaps when there is a consensus view expressed by many people across multiple forums, quite a few of them seem rather uninterested in the new Maple Leaf for three main reasons. These are because they do not collect the series, note it is not really a low mintage for a Maple Leaf collector coin or don’t see it as having secondary market potential.

At the same time, it is worth remembering that the new set may result in more Canadian collectors collecting eagles and even in more Americans becoming interested in Maple Leaf coins.  Keep in mind that among those U.S. collectors who collect foreign coins, the two countries’ coins most collected are those from Canada and Mexico. 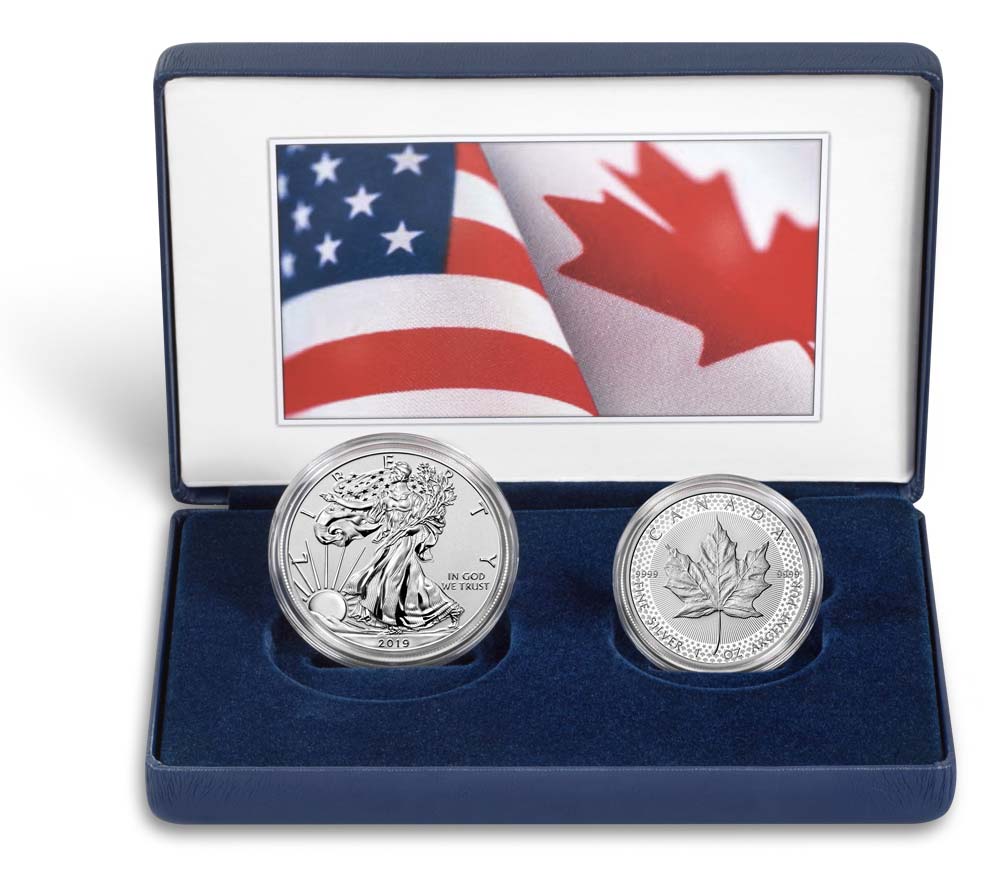 To the extent consensus exists about the forthcoming set it is that it is a must-have for eagle collectors and that it will sell out, which seems very likely since many buyers will purchase multiple sets, especially dealers who will have many coins graded and sell 70-graded examples at a substantial premium.

The main question is how long it will take to sell out, and on that opinion is also divided. For example, one poster on a forum noted:

The only question will be how long it remains available. The 2011 Anniversary Set, with a similar mintage of 100,000, sold out in about 4.5 hours. I don’t expect this set to sell out that quickly, but IMHO it will sell out. Earlier this year, the Kennedy/Apollo Half Dollar Set took about four weeks to sell out. I suppose that this set could sell out in a similar amount of time, but it might go quicker.

It, of course, remains to be seen what happens when the set launches on July 3 as well as in the longer-term. But between die-hard eagle collectors and Maple Leaf enthusiasts combined with coin sellers who sense a good profit potential between the mintage and what they expect to get for 70-graded coins, the set will probably sell out quickly — probably not in minutes or perhaps even hours but likely within either a day or couple days, especially with many buyers purchasing multiple sets (including dealers who will each obtain many sets by getting around the household limit). In fact, a telltale sign of demand will be whether dealers try to once again enlist their buyers to help them obtain more sets.

First day sales will play a key role, since if those sales are not around half of the total that result will depress sales in the following days and shape the short-term market potential for the coin. In the longer-term, much will depend on whether the enhanced Reverse Proof finish is used again and how many times and on the mintages of future special eagles. If the new eagle remains unique in appearance and one of the lowest-mintage issues, it should continue to command a premium and will be desired by future collectors.