In the recent past, online auctions by Heritage, Teletrade and Great Collections were the norm for Internet purchases. Increasingly, however, many collectors are shopping for coins not only on eBay but in smaller estate auctions hosted by such portals as Proxibid, iCollector and AuctionZip.

Lacking such statistics, collectors can overpay for coins in smaller online auctions. 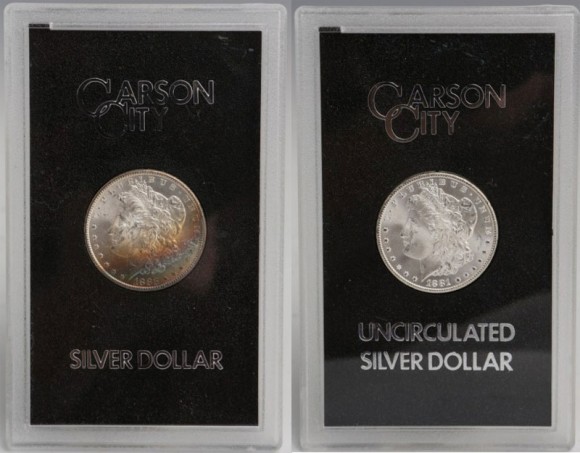 To test that assumption, I purchased 13 GSA Morgan Carson City dollars in a Dec. 15, 2012 session on Proxibid, conducted by Manor Auction, a Tallahassee firm (which, to its credit, did provide lot estimates).

I couldn’t afford to keep those coins, naturally. I planned to slab them at PCGS, predicting grades and anticipated retail prices. Then I’d send the holdered coins to Teletrade and try to recoup my expenditures.

As far as grading goes, I based my bids on these predicted grades:

I slightly over-graded, with my predicted retail prices at $5,700—roughly $1000 more than I paid at the Proxibid auction. At the time, this seemed like a good deal.

However, lower PCGS grades brought the retail total to $5,095—about $400 over my own realized prices on Proxibid. When slabbing fees were added, the profit margin shrank to $100.

How did I fare after listing the 13 coins in two Teletrade auctions?

Teletrade has no seller fees but adds a 17.5% buyer’s premium, roughly the same as Manor Auction at 18%. As such, the total 13 coins realized $4,321 at Teletrade, meaning that those buyers snared my coins for about $355 less than I paid for them. However, my share of that Teletrade sum was only $3,675. 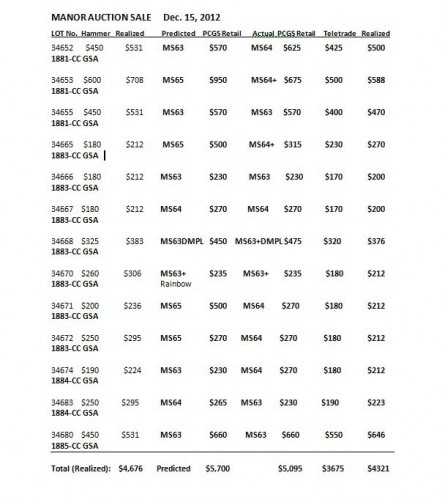 Of course, this experiment is far too narrow to reflect the auction market with respect to smaller Proxibid-hosted estate auctions vs. larger coin auctions on Internet. But it did verify some of my suspicions about the consequences of fewer numismatic data coupled with frenetic bidding from home offices, living rooms and mobile phones.

In sum, I now know how to cap my bids when online so that I don’t overpay.

My advice to you? The more numismatic education, the smarter the bidder. Lacking that, don’t hit the “increase bid” button.