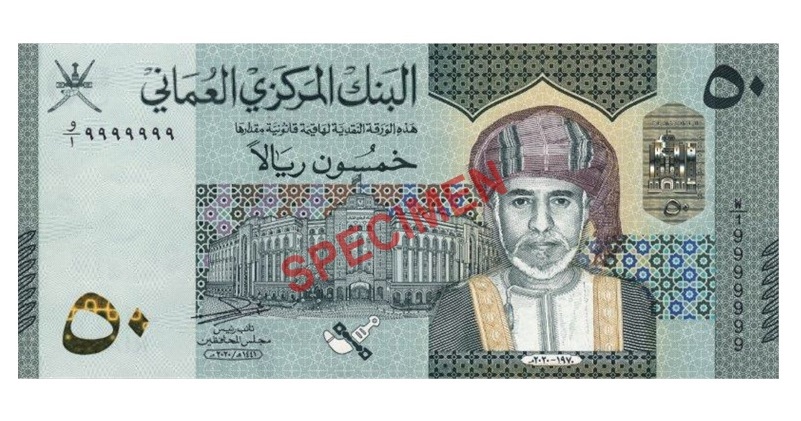 The Central Bank of Oman has issued (9th July) 50-rial banknotes (USD 129.80) which honour Oman’s 50th anniversary of Renaissance Day and what would have been the 50th anniversary of the reign of the late Sultan Qaboos Bin Said Bin Taimour (1940-2020), who passed away on the 10th January. Beginning with his reign, present-day Oman was recognised as an independent state, which was previously known as “the Sultanate of Muscat and Oman,” a former British protectorate from 1892 until the state achieved formal recognition by the British government as the Sultanate of Oman in 1970. 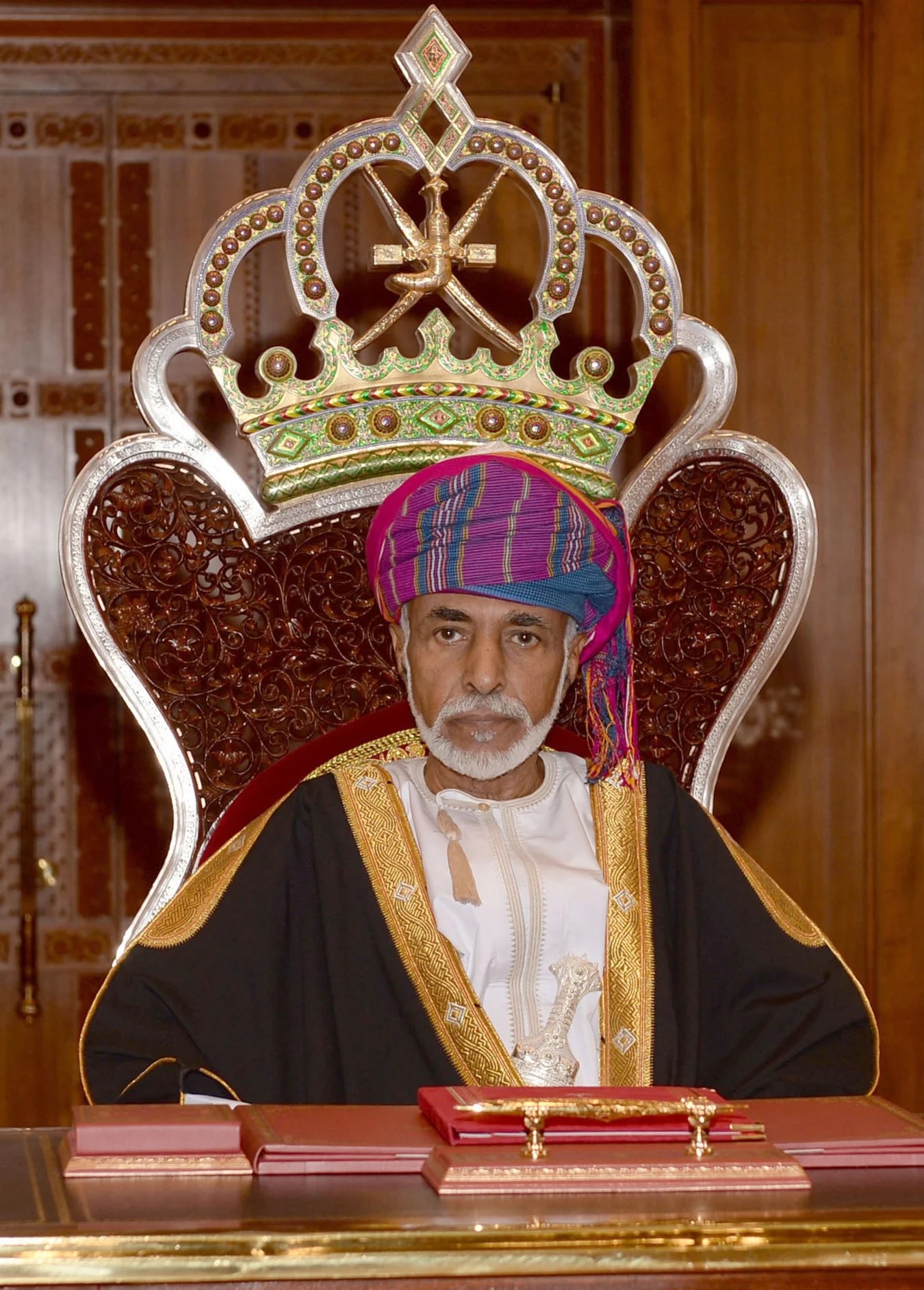 Qaboos acceded to the throne on the 23rd July 1970, following a successful coup against his father, intending to end the country’s isolation and use its oil revenue for modernisation and development. At this time, he declared that the country would no longer be known as Muscat and Oman, but would change its name to “the Sultanate of Oman” to reflect its political unity better. Great Britain recognised him as the country’s legitimate ruler, and the status as a British protectorate officially ended in 1971. The first day of Sultan Qaboos’ reign, the 23rd July, is celebrated annually as Renaissance Day and is the country’s most important national day. Of particular importance and change to the newly emerging Sultanate was the introduction of the Omani rial, subdivided into 1,000 baisa in 1970, which was established as the national currency, replacing the Indian rupee and the Maria Theresa silver thaler coin.

On the 22nd March 1976, Qaboos bin Said married his first cousin, Kamila née Sayyida Nawwal bint Tariq Al Said. The marriage ended in divorce in 1979, and there were no children born to the couple. Qaboos bin Said was diagnosed with colon cancer in 2014, for which he received treatment abroad. On the 14th December 2019, he was reported to be terminal with a short time to live after receiving medical treatment in Belgium. He made his wish known to return home to die in his own country and died on the 10th January. He was buried the next day in the Royal Cemetery, Muscat. At the time of his death, he was the longest-serving leader in the Middle East and the Arab world at nearly 50 years of rule.

As there was no official successor or crown prince to the Omani throne, the late sultan left the Royal Court to choose a successor from eligible male members of the family. As a precaution, and to break any stalemate in the event of no clear decision, he drafted a letter in which he named a successor. The banknote recognises his notable and significant accomplishments that placed the Sultanate prominently on the world map as a model of peace and stability, both economically and socially. 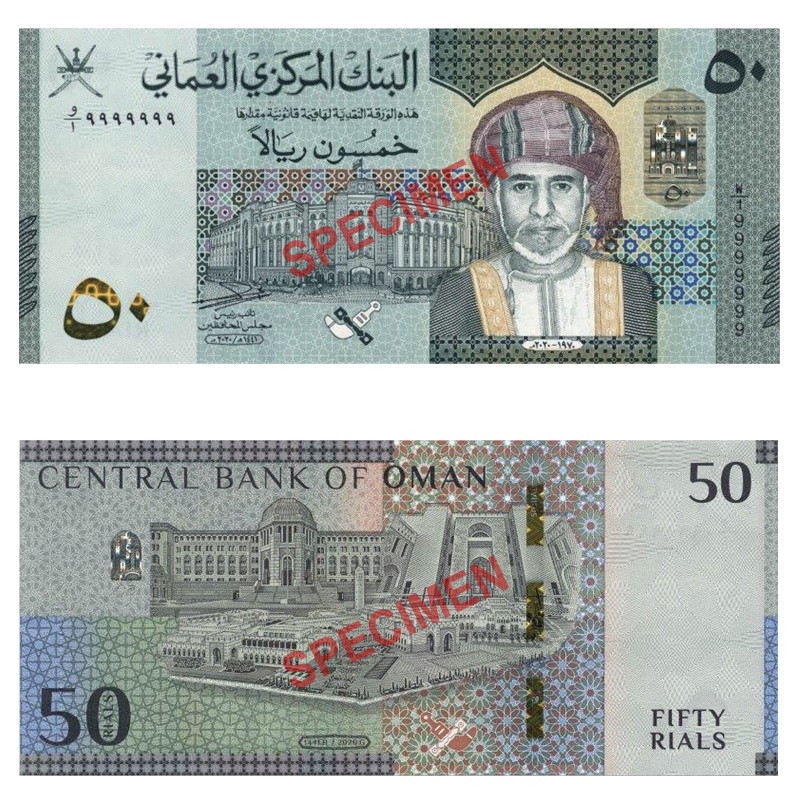 The banknote is predominantly green in colour and measures 173 by 76 millimetres. The date includes both the Islamic and Christian years of 1441 AH – 2020. On the face is a front-facing portrait of the late Sultan Qaboos Bin Said. Below his image is the years of his reign, 1970 – 2020, depicted in the Christian year. To the left of the sultan is a depiction of the façade of the building of the Central Bank of Oman. The back side includes illustrations of the buildings of the Council of Oman, the Supreme Court, and the Ministry of Finance.

See-thru Varifeye window: A golden-coloured see-thru window containing holographic images is seen to the right of the sultan’s portrait, which includes moving images of the main entrance the Central Bank of Oman building, the initials “CBO” in both Arabic and English, while the numeral “50” is in Arabic.

Watermark: A watermark which is a replica of the portrait of the sultan, as well as the numerals 50 and ۵۰is located to the left side when viewed from the face side.

Iridescent image: The numeral 50 is visible when the note is held under a source of light and tilted, which is located as a vertical stripe on the back side.

Colour-shifting ink application: The numeral 50, which is located to the lower-left, shifts colour from green to gold when the note is tilted.

Tactile print: Ornamental patterns consisting of seven repetitions and located on both edges of the face side of the note are printed using an engraved process and function as an element to aid visually impaired persons to identify the note.

Aligned Print: The image of the Khanjar (dagger) on the back and the face sides of the note lines up to complete a full image when viewed against a source of light.

The Central Bank also announced they would issue, as part of its new sixth series, additional banknotes of all other denominations currently in circulation during the last quarter of 2020. These denominations include 20, 10, 5, 1, and 1/2-rials and 100-baisa notes. For additional information about Omani banknotes and coins issued by the Central Bank of Oman, please visit their website.