On November 29, 2011, the United States Mint began accepting orders for the 2011-P Olympic National Park Five Ounce Silver Uncirculated Coin. This was the eighth release in the series of numismatic five ounce silver coins featuring the designs of the America the Beautiful Quarters Program. 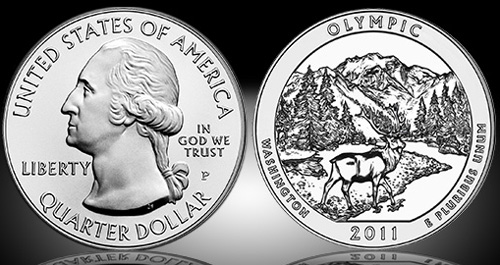 The coin’s reverse design contains a depiction of a Roosevelt Elk stepping onto a gravel river bar of the Hoh River with a view of Mount Olympus in the background. Inscriptions around the outer edge include “Olympic”, “Washington”, “E Pluribus Unum” and “2011”. The reverse was designed by Susan Gamble and sculpted by Michael Gaudioso. The obverse of the coin carries the John Flanagan portrait of George Washington used for the 1932 Washington Quarter. Inscriptions include “United States of America”, “Liberty”, “In God We Trust”, and “Quarter Dollar”. The edge of each coin includes incuse lettering indicating the weight and fineness “.999 Fine Silver 5.0 Ounce”.

A maximum mintage of 35,000 coins has been established by the United States Mint for this numismatic release. The coins have a special finish created through a vapor blasting technique and carry the “P” mint mark, which differentiates them from the bullion version of the coin released earlier this year.