Olympic National Park, located in the Olympic peninsula in northwestern Washington, contains four distinct areas: mountains, Pacific coastline, temperate rain forest in the west, and a drier eastern forest. It was originally the Mount Olympus National Monument, created by President Theodore Roosevelt in 1909, but was re-dedicated by Congress as a National Park in 1938. The area was used extensively by native tribes prior to the arrival of European settlers, who began harvesting the timber of the area. The protection of the breeding grounds of the Roosevelt elk was one of the driving factors in preserving the region in the early part of the 20th Century. 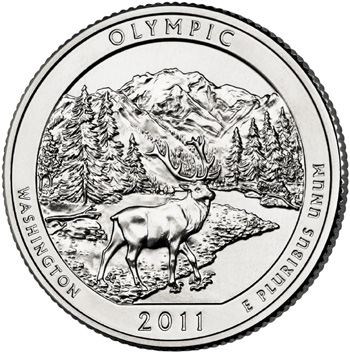 The Olympic National Park Quarter depicts a male Roosevelt elk standing on the shore of the Hoh river with Mount Olympus in the background. Also included in the design are the incused phrases “Olympic”, “Washington”, and “E Pluribus Unum”, as well as the date of issue. The coin will represent the third issue of the United States Mint’s America the Beautiful Quarters Program for 2011.

The Olympic National Park Quarter will be available from the U.S. Mint in the following products: