Up until the mid 1930’s the issuance of commemorative coins was rather sporadic, with a few multi-year issues that were meant to exploit the collector wishing to own all varieties, such as the Boone and Oregon Trail half dollars. Initially the historical significance for such issues was appropriate, as no one would ever dare to protest the issuance of a commemorative half dollar for the sesquicentennial of American independence. The issuance of classic commemoratives, however, reached a turning point by 1935, when this lucrative business became of increasing interest to business men, local politicians and coin dealers. The result was a number of commemorative half dollars that had very little historical significance and in one case was based on a private venture from one individual who misrepresented history in order to fill his own pockets. The man was L.W. Hoffecker, and the coin was the 1935 Old Spanish Trail Commemorative Half Dollar.

The 1935 Old Spanish Trail Half Dollar is now considered one of the classic key-dates within the commemorative series, with a relatively low mintage of 10,000 pieces and a design that is generally considered to be attractive. It was supposedly issued to commemorate the 400th anniversary of Alvar Nuñez Cabeza de Vaca’s expedition through the Southwestern United States on what the coin claimed was to become the Old Spanish Trail. There are a few historical inaccuracies with that assumption, however. Simply stated, the “expedition” lasted from 1528 to 1537 (so the 1935 “400th anniversary” would have been right in the middle of it), was not planned, and was mostly along the coast and not further inland as the map on the reverse of the Old Spanish Trail Commemorative suggests. The actual Old Spanish Trail was a trade route that was not fully established until the end of the 1500’s and whose route went as far inland as Utah. 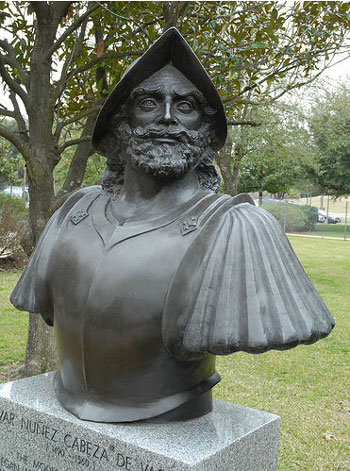 Photo by Ealmagro CC BY

But all inaccuracies aside, there is somewhat of a historical basis for the story. Cabeza de Vaca was born around 1490 in Seville, Spain. Little is known of his early life, but in 1527 he enlisted on an expedition led by Pánfilo de Narváez where he was appointed the treasurer. Narváez had been awarded (by Royal Decree) the gulf coast of what was later to become the United States, and with 600 men set out to explore and colonize the area. After stops on Hispaniola and Cuba they landed near present-day Tampa, Florida in the spring of 1528.

What followed were several hard months. The expedition, while exploring the area was in constant conflict with the local Native Americans, which consisted of numerous tribal groups. While only one person of the expedition died directly from a fight with the Native Americans, by September of 1528 the group of 600 men had been reduced to less than 250 due to hunger, drought and sickness. The remaining men realized that staying in Florida was not a viable option, and they devised a plan to build rafts and escape to other Spaniards who they thought were nearby, not realizing that the closest viable Spanish Colony was over 1500 miles away.

A total of five rafts were constructed, each holding approximately 50 men. Sailing out in September on the Gulf of Mexico, in the middle of the Atlantic hurricane season proved to be a fatal idea, and by the time they landed on shore, which is generally considered to be present-day Galveston, Texas, the party had been reduced to approximately 40 men coming from two rafts, with all others lost in a hurricane, including Narváez. At this point Cabeza de Vaca seems to have overtaken as a leader, and they set out to reach other Spaniards in Mexico, although they were unsure of their exact location.

What followed were nine hard years, which saw the party reduced to only three men, Cabeza de Vaca, another Spaniard, and a Moor slave. Following the coast, the men were regularly surprised by Native Americans, which often enslaved them for periods of time. Slowly making their way westward, Cabeza de Vaca appears to have taken on the position of an Indian trader, which allowed him to travel more or less freely between the various tribes of the southeast. He gained extremely valuable information on the Native American population, and because of him we have a historical record of Native Americans in the southeastern United States only shortly after the arrival of Europeans in the area.

In 1537 the three survivors finally reached other Spaniards in the present-day Mexican state of Sinaloa. After returning to Europe Cabeza de Vaca would write an account (from memory) titled “La Relación” (translated as “the account”) which contains an account of his travels through unexplored country. So even though the story of Cabeza de Vaca is extremely interesting and historically important, the commemorative coin issued in 1935 that is associated with it in reality has not much historical basis.

That said, it doesn’t mean that the Old Spanish Trail Commemorative is not an interesting coin, and its popularity seems to confirm this. As previously stated the coin was a private venture of L.W. Hoffecker, a business man and coin dealer from El Paso, Texas who would later become the president of the American Numismatic Association. Hoffecker created the El Paso Museum Committee, which was to be responsible for the issuance and distribution of the issue, but which in reality consisted of just Hoffecker himself. The legislation that created the issue (H.R. 6372) stated that “all proceeds shall be used in furtherance of the El Paso Museum” but it appears that Hoffecker kept all the proceeds for himself. 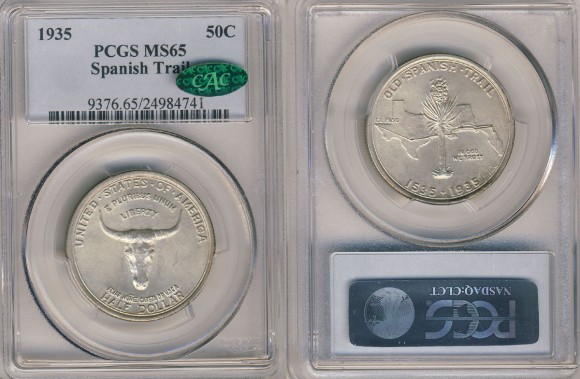 The coin itself (which sold for $2 a piece) was designed by Hoffecker as well, with plaster models created by El Paso artist Edmund J. Senn. On the obverse, in a plain field, is a cow’s head. No lifetime images of Cabeza de Vaca are known, and since his name means “cow’s head” in Spanish it was deemed appropriate to use this design. Directly below it is “ALVAR NUÑEZ CABEZA DE VACA”, with “HALF DOLLAR” directly below it. Above the cow’s head is the word “LIBERTY”, with E PLURIBUS UNUM above that and along the top is UNITED•STATES•OF•AMERICA. The reverse features a large map of the southwestern United States, from Texas to Florida (excluding Georgia). A line represents the supposed route of Cabeza de Vaca. Dots represent the cities of St. Augustine, Jacksonville, Tallahassee, Mobile, New Orleans, Galveston, San Antonio and El Paso, with only the latter spelled out. A large yucca tree in full bloom is seen in front of the map. OLD•SPANISH•TRAIL is on top, with IN GOD WE TRUST in a small font in the lower right field and the dual dates 1535-1935 along the bottom.

As previously mentioned this issue is considered to be one of the classic key-dates of the early commemorative series, although they are not as scarce as the prices would suggest. The majority of examples that survive (which is the majority of the mintage, since this issue was initially purchased by coin collectors as there was little local interest at the time) do so in gem uncirculated condition. Population figures of MS-64, MS-65 and MS-66 pieces are identical and prices are relatively close for all those grades, and only at MS-67 the issue becomes harder to find. It remains a very popular coin to this day, whether historically correct or not, and despite everything that has been written above it is an interesting coin that is worth studying.